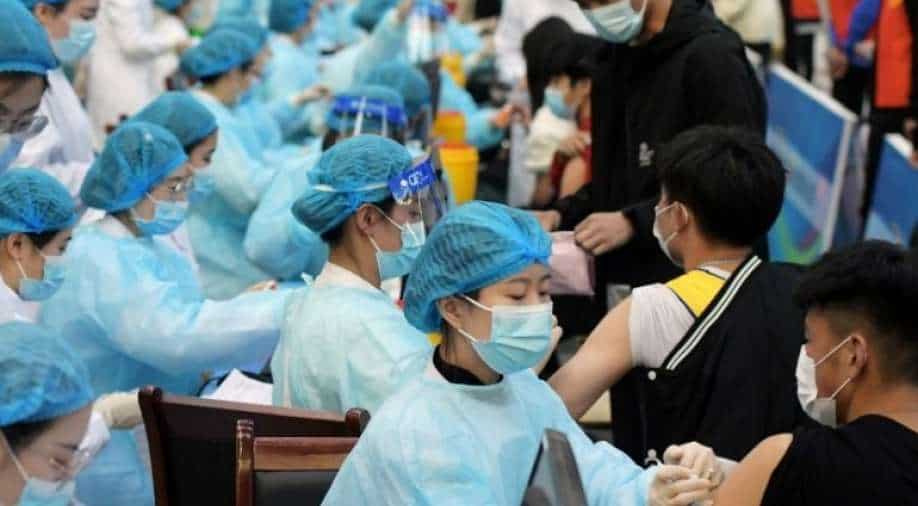 China is deploying a medley of tactics, some tantalizing and some threatening, to achieve mass vaccination on a staggering scale: a goal of 560 million people, or 40% of its population, by the end of June

In Beijing, the vaccinated qualify for buy-one-get-one-free ice cream cones. In northern Gansu province, a county government published a 20-stanza poem extolling the virtues of the jab. In the southern town of Wancheng, officials warned parents that if they refused to get vaccinated, their children’s schooling and future employment and housing were all at risk.

China is deploying a medley of tactics, some tantalizing and some threatening, to achieve mass vaccination on a staggering scale: a goal of 560 million people, or 40% of its population, by the end of June.

China has already proved how effectively it can mobilize against the coronavirus. And other countries have achieved widespread vaccination, albeit in much smaller populations.

But China faces a number of challenges. The country’s near-total control over the coronavirus has left many residents feeling little urgency to get vaccinated. Some are wary of China’s history of vaccine-related scandals, a fear that the lack of transparency around Chinese coronavirus vaccines has done little to assuage. Then there is the sheer size of the population to be inoculated.

To get it done, the government has turned to a familiar tool kit: a sprawling, quickly mobilized bureaucracy and its sometimes heavy-handed approach. This top-down, all-out response helped tame the virus early on, and now the authorities hope to replicate that success with vaccinations.

Already, uptake has skyrocketed. Over the past week, China has administered an average of about 4.8 million doses a day, up from about 1 million a day for much of last month. Experts have said they hope to reach 10 million a day to meet the June goal.

“They say it’s voluntary, but if you don’t get the vaccine, they’ll just keep calling you,” said Annie Chen, a university student in Beijing who received two such entreaties from a school counselor in about a week.

Worried about possible side effects, Chen had not planned to sign up. But after the counselor warned that she could soon face restrictions on access to public places, she relented — in part because she felt bad for him.

“The counselor seemed to think his job was pretty hard, too. He sounded exhausted,” she said.

Public anxiety about the vaccines emerged early. One survey in February, co-authored by the head of China’s Center for Disease Control and Prevention, found that less than half of medical workers in the eastern province of Zhejiang were willing to be vaccinated, many citing fear of side effects. By mid-March, China had administered only about 65 million doses for a population of 1.4 billion.

“China is at a very critical moment,” Zhong Nanshan, a top respiratory disease expert, said in a recent interview with the Chinese news media. “When other countries have been very well vaccinated, and China still lacks immunity, then that will be very dangerous.”

The warnings have been accompanied by a sweeping propaganda campaign and copious consumerist bait.

On Monday, the Wangfujing shopping district in Beijing was teeming with bargains for the vaccinated. A Lego store offered a free kit to assemble a chick emerging from an egg. A street stall touted a 10% discount on tea. A state-run photo studio even advertised a discount on wedding photos.

The promotion seemed to be working at one vaccination center, where people lined up for two-for-one soft serve at a bright yellow McDonald’s ice cream truck parked outside.

Wang Xuan, an employee inside the truck, described how the advertisement caught the attention of one passerby.

“He went straight inside to get the vaccine and then came out to us to buy ice cream,” Wang said.

Other localities have opted for more stick than carrot (or ice cream).

In Chongqing, a company notice ordered workers between 18 and 59 without underlying health conditions to be vaccinated by the end of April, or be “held accountable,” though it did not elaborate. A government bulletin in the city of Haikou, in Hainan, said companies with less than 85% vaccination rates would be issued a warning and could be suspended for “rectification.”

The city of Ruili, in southwestern China, last week became the first to adopt mandatory vaccination for eligible residents, after a small outbreak there. An official said the city expected to vaccinate the entire population of more than 200,000 people in five days by running vaccination sites 24 hours a day.

Some social media users have complained that the pressure campaigns restrict their right of choice. But Tao Lina, a vaccination expert and former immunologist at the Shanghai Center for Disease Control and Prevention, said it was justifiable to impose somewhat punitive measures in the name of public health.

“At this time, overly emphasizing freedom of choice is not a good idea,” Tao said. “Look at America: They wanted to choose not to wear face masks. That seems like a kind of freedom, but then what happened?”

Governments and companies in other countries have also adopted what some see as coercive measures. The Italian prime minister recently issued a decree requiring vaccinations for health care workers. A waitress in New York City was fired for refusing vaccination. Many countries are considering issuing vaccine passports for entry into public facilities.

Still, even China’s state-owned media has acknowledged that some local officials have been overzealous in their enforcement.

“These harmful developments are in reality the product of a small number of regions and companies that are anxious to complete their vaccination responsibilities,” it said. (The Wancheng government later apologized for its warning about children’s futures.)

It’s unclear how many of the promised restrictions are being enforced. Wu Kunzhou, a community worker in Haikou, the city where businesses were threatened with suspension, said he had marked a few businesses with red posters.

“Company that does not meet vaccination standards,” the posters said.

But there were no accompanying fines, and he said he could not force anyone to get vaccinated.

“The main thing is, there are orders from above,” Wu said.

Some residents have remained staunchly opposed to vaccination, despite the barrage of messaging.

Lu Xianyun, a 51-year-old construction industry employee in Guangzhou, cited a number of revelations in recent years of children in China being injected with faulty vaccines.

“I don’t trust them,” he said of the vaccine manufacturers.

Local officials have also issued conflicting guidance on the safety of vaccination for pregnant women. Some have reassured women trying to conceive that they should sign up, while others have urged those women to delay pregnancy.

Tao said officials had not done enough to instill public confidence in the vaccines. He said that he could think of only one prominent official, Dr. Zhang Wenhong — often compared to China’s Dr. Anthony Fauci — who had been publicly vaccinated. It doesn’t help that Chinese vaccine companies have been slow to share clinical trial data.

“If our country wants to improve public enthusiasm,” Tao said, “it would be best to share videos of leaders, cadres and Communist Party members getting vaccinated.”