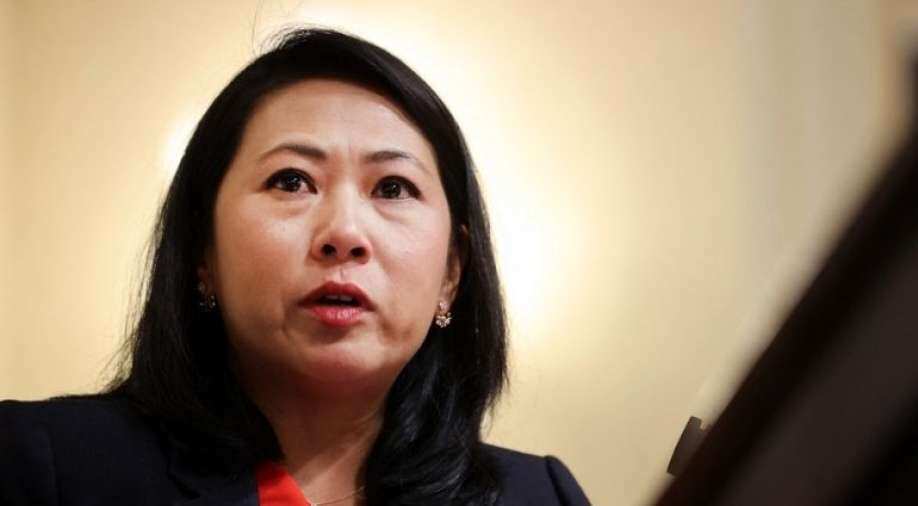 Democratic Representative from Florida Stephanie Murphy speaks during the Select Committee investigation of the January 6, 2021, attack on the US Capitol Photograph:( AFP )

Over a breakfast of bagels and doughnuts in Speaker Nancy Pelosi’s Capitol office last month, Rep. Stephanie Murphy, D-Fla., and a group of fellow centrist Democrats laid down an ultimatum: There was no way they would vote for President Joe Biden’s sprawling social safety net and climate bill until they saw an official tally of its true cost.

Their declaration torpedoed Pelosi’s plans to finally bring to a close months of feuding among the factions in her party and hold a vote that day to push through the twin pillars of Biden’s domestic agenda, leaving the fate of the ambitious social policy measure and a bipartisan infrastructure package in doubt.

But within days, it was Murphy who helped seal a deal to salvage both, by drawing up a carefully negotiated statement of support for the safety net legislation that persuaded progressives to vote for the infrastructure bill.

It helped lead to a fragile detente between moderates and liberals who had been at odds for months over Biden’s plans and ultimately helped steer both the $1 trillion public-works measure and the $2 trillion social policy bill through a House where Democrats have just a three-vote margin of control.

The larger bill now awaits action in the Senate, where it will probably be changed in ways that necessitate yet another House vote before it can go to Biden for his signature. Final passage of that legislation, coupled with looming votes on a sprawling defense policy bill and raising the limit on the nation’s ability to borrow, could potentially place Murphy in the spotlight once again.

Murphy, 43, who toggles between allying herself with party leaders and vexing them with her objections, has established herself as part of a group of rank-and-file moderate and liberal lawmakers who, empowered by Democrats’ razor-thin majority in the House, can have a major influence.

Their maneuvering on Biden’s social policy bill was not just a break with tradition in the chamber, where Pelosi has presided over a mostly top-down operation, but an early sign of a generational shift underway for a caucus led by octogenarians.

Even if her Orlando-area district is redrawn to more heavily benefit Republicans, Murphy, who ruled out challenging Sen. Marco Rubio, a Republican, in 2022 after it became clear that she would have to first prevail in a challenging primary, could again set her sights on a Senate seat in 2024. A member of the committee investigating what led to the Jan. 6 riot at the U.S. Capitol, she has also continued to build on a national security portfolio that began with work as a national security specialist at the Pentagon.

She leads the Blue Dog Coalition, a caucus of fiscally conservative Democrats that first came together after the 1994 midterm elections, convinced that their party had lost dozens of seats because it had strayed too far to the left. Before her, every leader of the Blue Dog Coalition was white, and all but one were men; Murphy is the first Vietnamese American woman to serve in the House.

Now in her second consecutive term at the helm of the group, Murphy has worked to slow down the legislation carrying Biden’s sprawling social policy agenda, pushing back on her party leaders’ rush to enact it before the end of the year. Long before a series of off-year election losses rattled the party last month, she pressed to delay a vote on the package until the most politically vulnerable Democrats were comfortable with its components and its price tag — and after the $1 trillion infrastructure measure, which has bipartisan support, had been approved.

Last month's breakfast with Pelosi was the culmination of those efforts. In the hours that followed, Murphy’s office became a de facto command center for centrist holdouts, who darted between closets and offices to field increasingly frustrated calls from activists, Democratic leaders and White House officials.

It was there that lawmakers finalized the painstakingly worded statement that ultimately unlocked the votes needed to send the infrastructure bill to Biden for his signature and set up a vote to pass the social spending bill just before Thanksgiving break.

“It was an incredible moment, because we were able to work directly with one another, even though we had different views, and bridge that divide,” Murphy said in an interview. “This demonstrated that top-down isn’t the only way that you can get things done.”

The shift is notable given that Pelosi, 81, who has led House Democrats for nearly two decades, is known for keeping a tight rein on her fractious caucus, rarely ceding much public control over the process of corralling rank-and-file lawmakers on tricky issues. Several Democrats, triumphant over the outcome, said the shift could be permanent.

“Leadership didn’t initiate it,” Rep. Mark Pocan, D-Wis., a prominent member of the Congressional Progressive Caucus, said in an interview about the negotiations that led to the deal. “Leadership didn’t even know what the wording was going to be because we were working on it. We kind of saved it, I think, as individual members who cared about the president’s agenda."

For months, Democratic leaders had played a frantic game of Whac-a-Mole to pacify lawmakers with dueling priorities. Liberals wanted a more generous bill, and moderates, whose main priority was passing the infrastructure measure, wanted to ensure that the social safety net measure would be fully paid for. They doled out promises, tweaked minute details and cobbled together outside data to tally the cost of the social policy package.

By the first week of November, after weeks of fitful negotiations, top Democrats adjourned the House late on Nov. 4 confident that they could win over the half-dozen moderates who were still holding out and pass both bills the next morning.

But when Murphy arrived at Pelosi’s office that day with her centrist allies, they made clear they would not support the social safety net bill without official estimates from the Congressional Budget Office, the nonpartisan scorekeepers on Capitol Hill, demanding information that would require at least a week.

That sent Democratic leaders scrambling to salvage the pair of bills, keeping a procedural vote open for hours as they summoned key players to Pelosi’s suite.

As she fielded calls and pleas to let the bill go through, Murphy received a text message from Rep. Ted Lieu, a liberal Democrat from California: Would she be open to making a commitment of support for the social policy package? She responded that she most likely would, and Rep. Hakeem Jeffries of New York, the No. 4 Democrat, along with Reps. Josh Gottheimer and Donald Norcross of New Jersey, began working on a statement that soon circulated among Democrats.

A few floors away in the Longworth House Office Building, Rep. Pramila Jayapal, D-Wash., chair of the Progressive Caucus, gathered her members to figure out whether the group, nearly 100 strong, would be willing to vote for final passage of the infrastructure bill even if the social safety net measure had to wait. Answering a call from Biden, she put her phone on speaker in the middle of the room so he could directly address the dozens of lawmakers assembled there.

Biden asked the caucus point blank to vote for the infrastructure bill. He warned that failure to pass it would tank his entire agenda. And, pressed by liberals in the room, he said he would push for a stronger commitment from the moderates to a vote on the other measure in the coming days.

Once Biden hung up, Rep. Joe Neguse, D-Colo., a member of leadership, reached out to Murphy and the moderate lawmakers to discuss the details of the statement. He was soon heading to Murphy’s office with a few colleagues, including Rep. Jimmy Gomez, D-Calif., who was previously tapped by Pelosi for negotiations; Rep. Mondaire Jones, D-N.Y., a freshman; and Pocan, a former head of the Progressive Caucus who once accused some of the moderates of child abuse during a debate over border aid.

After weeks of polarized meetings where moderates and progressives were hosted separately at the White House, it was one of the few times when the factions had met together.

Lawmakers hunched over a laptop in Murphy’s office to edit what would ultimately be a 123-word statement, debating the semantics, down to the minute differences between terms such as “voting for” and “support.”

They haggled over whether to set a specific date for a vote to reassure progressives that the social policy bill would not be held up for long, settling on the week of Nov. 15.

“We act like we’re enemies and we’re not — we should have been sitting down talking to each other well before this,” said Rep. Kathleen Rice, D-N.Y., a close friend of Murphy's. “It came to both of us saying that.”

Pelosi, who had staked her personal reputation on passage of both pieces of legislation, kept tabs on the talks from afar, filling lawmakers’ voice mailboxes with stern messages exhorting them to get in line behind the infrastructure bill and plucking updates from loyalists as they ducked in and out of private meetings.

The shuttle diplomacy gained urgency as the day wore on. At one point, Rep. Sara Jacobs, D-Calif., a freshman, took off her shoes to run through the marble hallways, ferrying messages between leaders and representatives huddling in the Longworth building across the street.

Ultimately, the joint statement — issued from personal Twitter accounts — was enough to secure the votes needed to pass the infrastructure bill the next morning and the social policy measure before Thanksgiving.

For the lawmakers who helped broker the deal — several of whom are widely seen as likely candidates to lead the party in years to come — it was a validation of their ability to bridge internal divides, and a reminder that sometimes the best solutions come from the bottom up.

“Going forward,” Rice said, “it’s going to be hard for rank-and-file members not to be heard.”