How representative is Hamas of Palestinians? 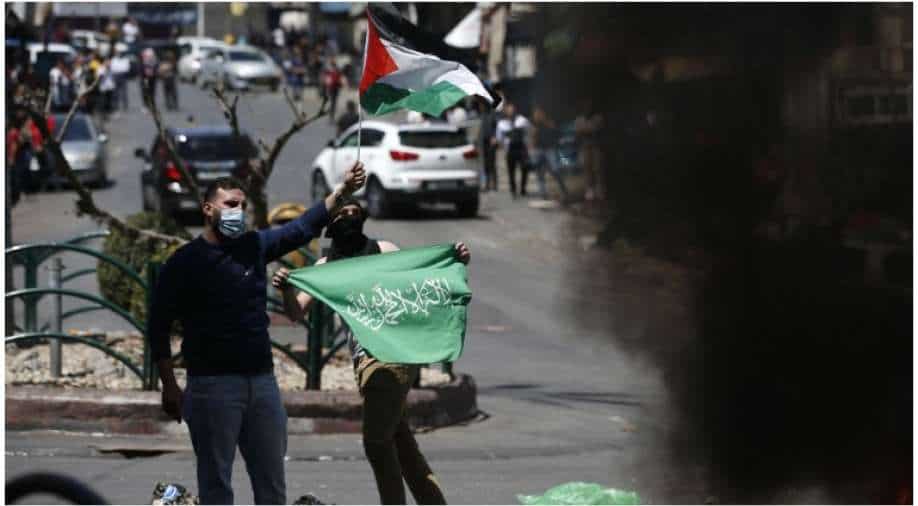 Palestinians demonstrators wave their national flag (Top) and green Hamas banner (bottom) during protests against Israel's occupation and its air campaign on the Gaza strip on May 18, 2021 Photograph:(AFP)
Follow Us

Hamas was founded in 1987 around the same time as the first Intifada or uprising. They were an offshoot of the Muslim Brotherhood in Egypt. Unlike the Fatah, Hamas has a military wing. And they are not shy of using it

Is there any way out of the Israel-Palestine conflict? This cycle of war and murder has gone on for more than 70 years. Experts often talk about the two-state solution. India supports it. As do many others.

So what is the two-state solution? In simple words, the creation of two states. One for the Jews, called Israel. And one for the Arabs, called Palestine.

The two-state solution was first pitched in 1937. On paper, it looks simple enough. In reality, it's anything but. Historians call it the most intractable conflict in the world.

What do the people say? This is what a Gallup poll found in 2013.

70 per cent Palestinians in the West Bank support the two-state theory. 48 per cent in Gaza and 52 per cent in Israel. So the people are willing to live as neighbours.

Then why is the promise of Palestine still unfulfilled? To understand this we must look at the politics of Palestine. Both domestic and international. Who speaks for the Palestinian community? Who is their leader? And why are Arab states suddenly wary of supporting their cause?

For Arab states, choosing between Israel and Palestine was easy. They backed Palestine. But this time it's not so simple. Israel is now a recognised partner of the Arab world. Last year, four countries normalised ties with Israel. The UAE, Sudan, Bahrain and Morocco. Others were reportedly going to follow suit.

So what do these countries do?

Make vague statements of support for Palestine. Watch the conflict closely but not engage in it. Palestine is on the backburner because the Arab world has bigger priorities now. They see Israel as a strategic partner. A market with immense potential. And an ally against Iran, Turkey and the Muslim Brotherhood.

Arab people still support Palestine. They are flooding social media with hashtags. And marching on the streets. The only difference is that their leaders don't share this enthusiasm anymore. Their condemnation of Israel is more out of compulsion than concern.

That's the regional politics. What about the internal politics of Palestine?

For decades it was dominated by Yasser Arafat. The Palestinian struggle was synonymous with him. Until he was alive there was unity in the movement.

But Arafat died in 2004. And with his death factionalism crept in. Today, Palestinian politics is a story of fragmented leadership. In the West Bank, the Fatah party, founded by Arafat, calls the shots.

In Gaza, it's the Hamas.

Hamas was founded in 1987 around the same time as the first Intifada or uprising. They were an offshoot of the Muslim Brotherhood in Egypt. Unlike the Fatah, Hamas has a military wing. And they are not shy of using it.

Canada, the EU, the US, Israel and Japan have listed them as a terror group.

What about India? New Delhi does not classify Hamas as a terror group. In 2018 they abstained from a UN vote condemning them. Both civilian and military targets are fair game for Hamas. Some of their attacks have been classified as war crimes.

But before their military adventurism Hamas was actually a political success. They won the 2006 Palestinian elections. They were set to dominate West Bank politics. But that's when the West stepped in, the powers of the western world. They made two key demands from Hamas.

One, a commitment to non-violence.

And two, the recognition of Israel.

Unlike the Palestinian Liberation Organisation (PLO), Hamas doesn't recognise the state of Israel. They consider violence to be a legitimate tool of the movement. Thanks to all this, foreign aid dwindled. Palestinian leaders grew uneasy. The split between Hamas and Fatah widened.

In 2007, it reached tipping point with the battle of Gaza. The battle ended with Hamas taking over the Gaza strip. And since then they have ruled this Palestinian enclave.

In these 14 years, their approach hasn't changed. Hamas prefers rockets over diplomacy. So they make more headlines than the Fatah.

Most of the leaders of Hamas live in fancy hotels in Turkey, away from Gaza and the war. They have their swimming pools and country clubs, even private bodyguards. All this when people in Gaza suffer.

Forbes listed Hamas as the third richest terror group in the world. Their annual income was 700 million dollars.

So it's clear that Hamas does not speak for all Palestinians. Most of them would prefer a peaceful solution to this conflict. But Hamas is dead set on military victories. And none of it is surprising.

Every movement in history has had two factions, the moderates and the extremists. Hamas is the extremist group here.

Their only claim to legitimacy is the fact that Israel is bombing them.

But war cannot be the way forward. Especially against a superior power like Israel. The little gains that Palestine has made have been through diplomacy. There have been none on the battlefield. So the picture of Hamas fighters resisting Israel is a romanticised reality.

It makes for great headlines, but nothing else.