How misinformation on social media is worsening Israel-Gaza conflict 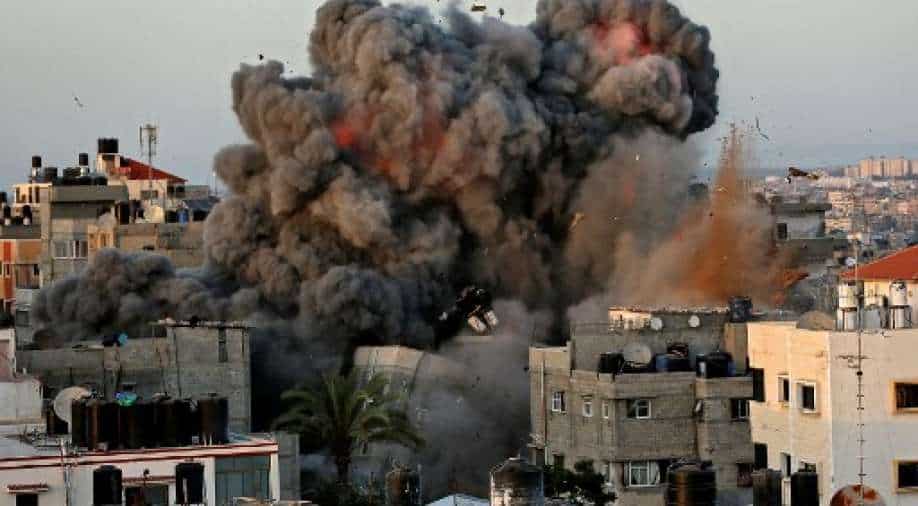 It may still take a while for the mediation process between Israel-Gaza to begin. Until then, as we watch the developments, it's imperative that we don't feed the hostility with misinformation and provocative fake news

In the ongoing Israel-Palestine conflict, the gap between truth and falsehoods is growing wider by the day. A lot of credit for this goes to social media where misinformation is flourishing with fake videos and images going viral.

A video showed a truck-based missile launcher moving down a civilian area. This video was first shared by a US-based pro-Israeli account and has since been shared repeatedly with the claim that it's from Gaza. It claims that Hamas is using humans as a shield against Israel. But the video is fake.

Here you see a Hamas rocket launcher parking in a civilian area to use humans as shields. Let no one fool you as to the true intent of Hamas - they want death of Israelis even if it means their own die too.#IStandWithIsrael #HamasTerrorists pic.twitter.com/LoF6USaBGM

It's not even from Gaza, but finds origins in northern Israel and was shared in November 2018 by an Israeli news agency. These are Israeli trucks that got lost on their way and entered a village. The account that posted this video has taken it down saying “please accept my apology for the bad info”.

In another case, a video claims to show Israelis celebrating as a fire rages at the Al-Aqsa mosque. This video is being shared widely by pro-Palestinian accounts. They say Jews harmed their mosque and danced as it burned!

Hundreds of Jewish settlers cheered and danced as a tree inside Masjid Al Aqsa was set on fire by occupying Israeli forces’ stun grenades yesterday. pic.twitter.com/nhJgHW3IpP

The video is misleading for the mosque was never on fire, but a tree around it did due to fireworks during Jerusalem Day celebrations on May 10. Both the image and the video are still being widely shared on social media even in India. This misinformation and these lies could prove to be potentially deadly for both Israelis and Palestinians.

Fatalities on the rise

The conflict is far from over and the skies are still burning on both sides with the death toll rising between May 10-17. A total of 12 people died in Israel - 10 were killed in missile attacks and two in civil unrest including a child.

In addition, 796 people have been injured. During the same period, at least 212 people have died in Palestine including 61 children and 34 women, three of whom were pregnant. Over 6,000 people have been injured in eight days of conflict. The timing for the conflict couldn’t be worse given the ongoing COVID-19 pandemic. Gaza has only one lab to test virus cases. The health ministry says it has been destroyed in an airstrike.

In Israel, two foreign workers from Thailand have been killed in rockets fired from Gaza. Israel claims to have destroyed a rocket launching site used by Hamas in the Gaza strip. And Hamas claims to have struck Israel's Urim military base - vowing to strike more military facilities.

Amid this back and forth, both sides are failing to justify their actions. Last Saturday, Israel struck a building that housed two major media organisations - The Associated Press and Al Jazeera. Both their offices were destroyed in an air strike. Israel claimed that Hamas was using the building for its operations and promised to provide evidence for this. The Associated Press, based out of the US, first said that Israel hasn't provided it with any such evidence. On Tuesday evening, the US State Secretary said that “we have received some information, but it's not something I can comment on”.

Reports say that the ongoing clashes have also led to a rise in anti-semitism. The UK’s Community Security Trust, a charity which looks after the safety of Jews in England says that there has been a five-fold increase in reports of anti-semitic incidents in recent days.

According to the charity, at least 86 anti-semitic incidents were reported in the UK between May 8-17. A Pakistan-based freelance writer working for the CNN put out the following tweet on Sunday - “The world today needs a Hitler”, a brazen display of hatred towards Jews.

The company in question had cut all ties with this person. Meanwhile, the international leadership remains divided. The starkest division is being seen in the Arab world.

Many Arab nations are walking a diplomatic tightrope especially countries like Morocco, Sudan and Bahrain which had recently normalised ties with Israel. Now, they have condemned the clashes but said very little about the situation in Gaza.

On the other hand, countries like Turkey, Pakistan, Indonesia, the Maldives, and Iran have vociferously accused Israel of terrorising Palestinians. The President of Egypt Abdel Fattah Al-Sisi, along with the President of France Emmanuel Macron discussed mediating a ceasefire between Israel and Palestine. Reports say both countries also intend to seek the support of Jordan.

“For me, it is part of the process of achieving a ceasefire as quickly as possible, which is obviously what we want, and the construction of a possible path for discussions between the various parties involved. In this respect, we have decided to have a discussion in the next few days with president Sisi and the king of Jordan to try to see together how we can make concrete proposals on this path”, French President Emmanuel Macron said.

It may still take a while for the mediation process to begin. Until then, as we watch the developments, it's imperative that we don't feed the hostility with misinformation and provocative fake news.