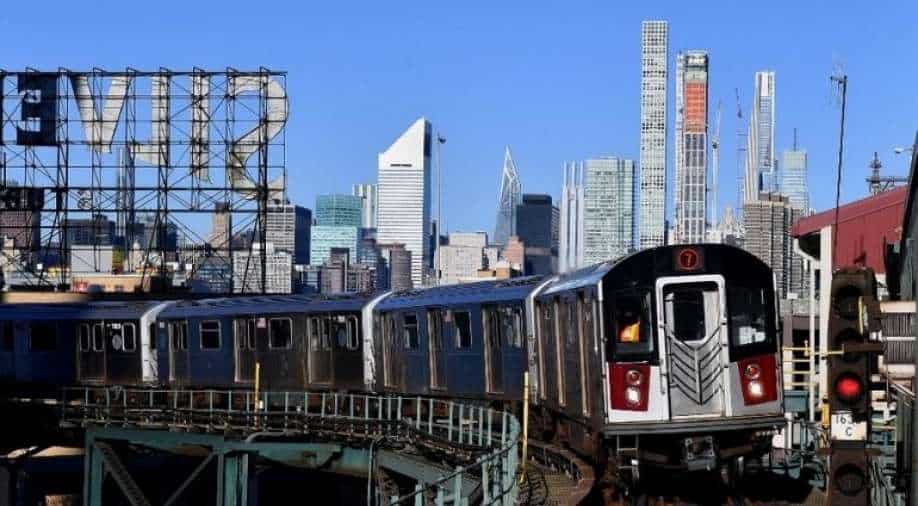 A view of a subway train and Manhattan buildings is seen on March 2, 2021 in New York City Photograph:( AFP )

At 8:30 on weekday mornings, there is now enough space in the Main Concourse at Grand Central Terminal for travelers to walk at least 6 feet apart. Most move at a stroll rather than the New York City speedwalk. Early last year, about 160,000 people passed through the station each weekday. Ridership is now less than a quarter of that.

The pandemic has profoundly disrupted the largest public transit system in America, throwing it into financial turmoil. But getting more people on public transportation will be a crucial component of New York City’s plan to become carbon neutral by 2050. The system needs to grow — right at a time when it is facing a sharp decline in ridership and revenue.

Subway rides, bus rides and car trips in New York City fell drastically last March as coronavirus cases surged and the city entered a mandatory lockdown. Some residents who could afford to left the city for second homes or rentals in the suburbs. Many employees switched to remote work and have not yet returned to their offices. Keeping the city’s buses and subways moving has been crucial for transporting medical and essential workers, but, with fewer riders, the city’s public transit organization is facing its worst budget crisis in history.

“We are still in a severe fiscal crisis caused by the pandemic,” said Shams Tarek, deputy communications director at the Metropolitan Transportation Authority, which operates many of the subways, buses and trains in the New York metro area. “But we’re optimistic about the future, given the support we’ve received in Washington. We expect ridership to gradually return to the system — it’s not a matter of if, but when — and we will continue to power New York’s recovery.”

Before the pandemic, New York City’s subways were the city’s most popular mode of transit. There were nearly 1.7 billion turnstile swipes in 2019. But last March, ridership fell 90% and has only recovered to a third of what it was before the pandemic.

Transportation researchers attribute New York City’s drop in public transit riders to the shift to remote work and say that the dip in tourism may also be contributing to fewer subway rides.

“There’s a difference in travel right now,” said Hayley Richardson, a senior communications associate at TransitCenter, a nonprofit group that advocates for public transportation in New York City. “White-collar workers are not going to the office, fewer people are taking trips for entertainment. There’s just less movement around the city.”

The citywide decline in subway riders has wiped out the transit budget. Since last spring, the MTA has been operating on $8 billion in coronavirus relief payments from the federal government and an additional $3 billion in short-term loans. But that money will soon run out. The MTA will require an additional $8 billion by 2024 to avoid dramatic service cuts and layoffs.

The high costs of sanitization and investments in worker protections have also compounded financial problems for the organization. Systemwide, the MTA spent $371 million on pandemic-related costs in 2020 and expects to spend close to that same amount each year through 2024. Station and train cleaning efforts require closing the subway system overnight, which reduces service in the early morning hours.

In the early days of the pandemic, it seemed all but impossible to follow social distancing guidelines while staying safe on New York’s crowded buses and subways. Those initial fears of infection may have spurred car purchases. And some former riders may still be avoiding transit for fear of contracting the virus, though transmission risks are lower than offices or classrooms if all passengers wear masks and practice social distancing. “Despite the fact that all of the subsequent studies have failed to show a link between COVID transmission and transit, that idea was difficult to dislodge once it got into people’s minds,” Richardson said.

Bus ridership dropped precipitously in March, but rebounded faster than subway ridership. “The majority of bus riders during the pandemic were essential workers,” said Jaqi Cohen, the campaign director for the Straphangers Campaign, which advocates for public transit riders.

In March, the MTA implemented rear-door boarding on buses to keep passengers distanced from drivers until plastic partitions could be installed around the driver’s seats. On local buses, the fare box is near the front door, so the policy effectively eliminated fares on those routes. When those partitions were completed in September, fares were reinstated and ridership dropped a second time.

“The fact that bus ridership is only down 40% really says so much about what role the city’s bus system plays as sort of the workhorse and getting essential workers where they need to go and, you know, getting people to doctor’s appointments and grocery stores,” Richardson said.

Bus riders are more likely to be older, people of color or immigrants than subway riders, according to Richardson. The MTA has also introduced three new bus routes to serve riders during the overnight subway closures and increased service along its busiest routes.

Car travel was quicker to recover than any form of public transit, though fewer people are making trips than before the pandemic, according to analyses by INRIX and StreetLight Data, two firms that specialize in mobility data.

In New York City, morning rush hour on highways has subsided. With less driving overall, the city’s roadways have fewer traffic jams and higher vehicle speeds. The traffic analysis showed that the daily surge in vehicle traffic is more spread out throughout the day and into the afternoon, likely because of an increase in home deliveries and more New Yorkers running errands during the afternoon.

As New York City reopens, the increase in driving will lead to bottlenecks and slower speeds. “We cannot depend on single-occupancy vehicles to function as a city,” Cohen said. “There’s only so many cars that can be on the road in New York before the streets have hit total gridlock.”