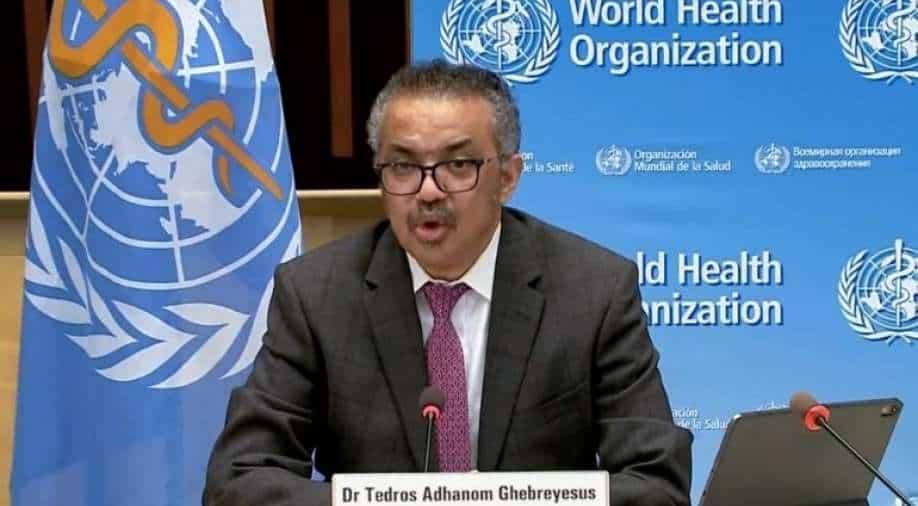 This handout TV grab taken on January 5, 2021 shows World Health Organization (WHO) Ethiopian Director-General Tedros Adhanom Ghebreyesus during a press briefing on Covid-19 (novel coronavirus) via video link from the WHO headquarters in Geneva. An intern Photograph:( AFP )

Dr Ryan, executive director of the WHO can be heard complaining about the lack of data from China.

Almost a year ago, the world was in a different place with the Wuhan virus mostly limited to China and the rest of the world did not need masks or lockdowns.

In the months that followed a lot has changed as the Wuhan virus has spread its tentacles and wreaked havoc across the world. A year after the pandemic started, WHO investigators in Wuhan have finally started piecing together what happened as fresh revelations have now emerged.

There is more proof of what happened in those early months and how China didn't release critical information including how the World Health Organisation struggled to get the data they needed despite all that, the WHO publicly kept praising China.

Audio recordings from within the offices of the World Health Organisation show top officials of the world health body were discussing and complaining about China's attitude. The first set of voices is from the second week of January.

First is Dr Michael Ryan who serves as the executive director of the WHO.  Ryan often shares the dais with the WHO director-general Dr Tedros during the press briefings of the world health body.

In the clip, Dr Ryan while speaking to his colleagues asks them to shift gears and apply more pressure on China.

"We do need to shift gears now cause we've all been - some of us have been here before. This is exactly the same scenario, endlessly trying to get updates from China about what was going on in Guangdong and then bang. WHO barely got out of that one with its neck intact given the issues that arose around transparency in southern China," Dr Michael Ryan, WHO executive director, emergencies, says.

"WHO barely got out of that one with its neck intact given the issues that arose around transparency", Dr Ryan is heard referring to the 2002 SARS outbreak which was another major disease outbreak where China was accused of covering up.

There is more. In the next clip, Dr Ryan can be heard complaining about the lack of data from China.

"General, 'there's been no evidence of human-to-human transmission' is not good enough. This would not happen in Congo and did not happen in Congo and other places. We need to see the data, we need to be able to determine for ourselves the geographic distribution, the timeline, the epicurve and all of that. It's absolutely important at this point and not so that we have all the data as an organization, so we can protect China."

"so that we can protect China," says the executive director for emergencies of the WHO. Dr Ryan wanted the WHO to conduct its own independent analysis since he felt that was the "best way" to "protect China" from possible action by other countries.

Dr Ryan believed Congo was more forthcoming about the Ebola outbreak in 2018 than China for the Wuhan virus. Clearly,  he wasn't happy about how Beijing was behaving.

In the next audio clip Dr Maria van Kerkhove, the WHO technical lead is heard speaking about the lack of data from China...

"We're going on very minimal information, knowing a little bit about ventilation and ICU and ECMO (extracorporeal membrane oxygenation, a form of life support) and deaths is helpful but I know it's clearly not enough for you to do proper planning in the way that you would like to," Dr Maria van Kerkhove, WHO technical lead, COVID-19, says.

Perhaps, the most revealing audio clip is of the WHO official on the ground Dr Gauden Galea was the WHO representative in China at that time when the first cases were being reported and he said China wasn't sharing any specifics.

"We have informally and formally been requesting more epidemiological information, specifically, what was the date of onset of the last case and even that one line of information would have been, already been helpful, but all we are getting in return for that question is, there's a new update that's going to come out, they're working on this, it may be – but then when asked for specifics, we could get nothing,"  Galea said.

In another clip, Dr Galea says that they were getting information just 15 mins before it appeared on CCTV, the Chinese state broadcaster. The WHO officials were just getting an advance press release to deal with the Wuhan virus outbreak.

A couple of weeks later, on January 14  the WHO had put out the infamous tweet claiming there is no human-to-human transmission of the virus, however,  by the end of January, the WHO realised it wasn't the case.

"What happens next, as far as our counterparts are concerned, they are now talking openly and consistently about human-to-human (transmission), we did not (inaudible) debate as to whether this is sustained, but their one key request in this regard is that they would like WHO's help in communicating this to the public, without causing panic,"  Dr Gauden Galea said

All through this, the WHO officials kept praising China in public, director-general Dr Tedros lauded the response of the Chinese authorities and Xi Jinping himself while behind the scenes the senior-most officials of this health body kept complaining how China wasn't sharing the information they needed.

There is more proof of China's criminal negligence. A doctor in Wuhan has now spoken out. He was working in a hospital hit hardest by the Wuhan virus. He claims that the doctors suspected the virus was highly transmissible way back in early January but the Chinese authorities stopped them from warning anyone.

In just one year, the virus has made its way to more than 190 countries and regions infecting over 100 million people and killing over 2 million. These revelations are just a reminder of the sins committed by China.