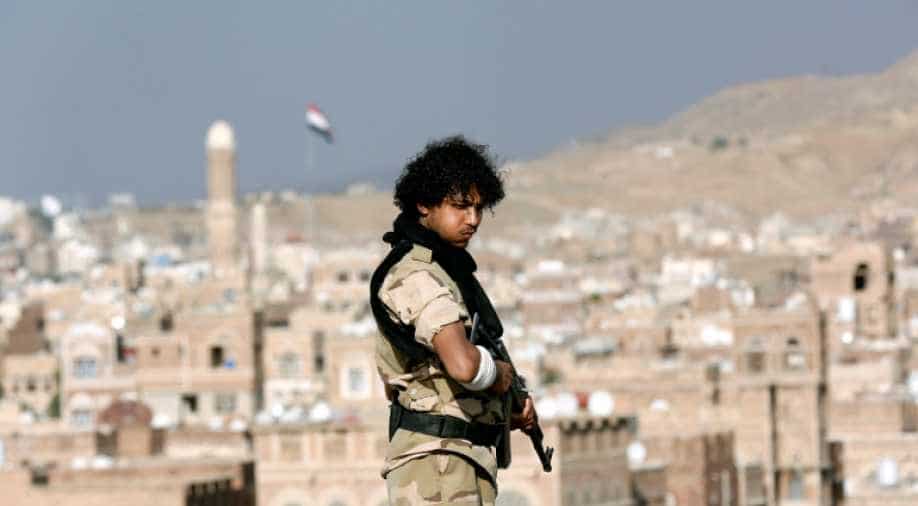 A Houthi militant stands guard on the roof of a building overlooking a rally attended by supporters of the Houthi movement in Sanaa, Yemen March 3, 2017. Photograph:( Reuters )

The Houthis said the attack happened near the border with Saudi Arabia's southern region of Najran.

The spokesperson for the Saudi-led coalition in Yemen on Monday said it was "not appropriate" to respond to claims made by Iran-aligned Houthis insurgents that they had carried out a major attack, in which thousands of Saudi troops and many vehicles were captured.

"Their media is deceptive, it creates events, it tries to misguide public opinion inside Yemen, regionally and internationally," Colonel Turki al-Malki said at a news conference in Riyadh.

The Houthis said the attack happened near the border with Saudi Arabia's southern region of Najran.

Yemen's interior minister earlier denied that the incident had taken place and said video released by the Houthis was old footage.

Al-Malki also hailed the "great effort" by the ICRC (International Committee of the Red Cross) in facilitating the release of prisoners of war from Houthi custody.

The ICRC said 290 Yemeni nationals were transferred from the Houthi-controlled capital Sanaa to their homes on Monday - a unilateral move that the United Nations hoped would help revive a stalled peace process after months of failed efforts to push through a prisoner swap.

The Houthis agreed in Sweden in December with Yemen's Saudi-backed government to swap prisoners as a confidence-building step. But the arrangement has been stalled as the sides struggled to agree on implementation. Each side was meant to release around 7,000 prisoners.

When asked about the prisoner release, al-Malki said he did not have any more information on it.

The conflict has killed tens of thousands of people and pushed millions to the brink of famine. The United Nations calls it the world's worst humanitarian crisis.