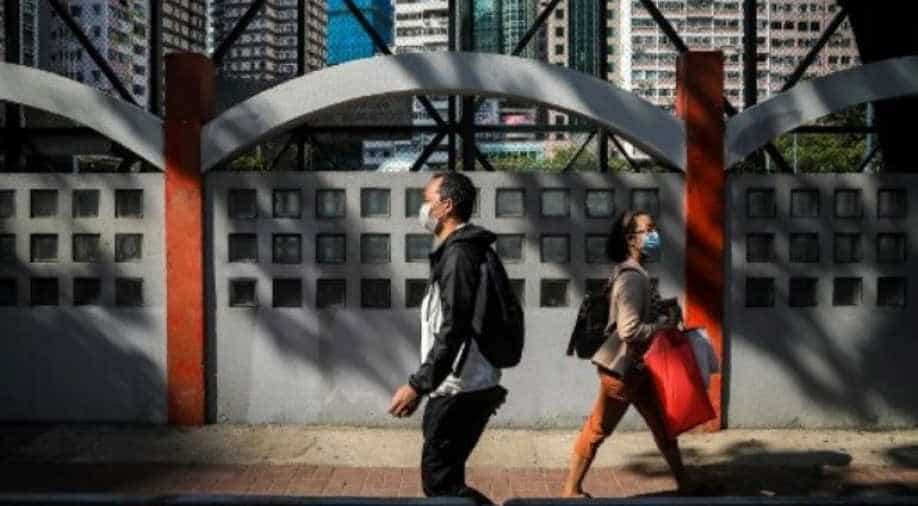 Pedestrians wearing face mask amid concerns about the spread of the COVID-19 in Hong Kong on March 1, 2020. Photograph:( AFP )

Hong Kong authorities have ordered that anyone testing positive for the virus must go to hospital, including babies, while all their close contacts, even those, who test negative, are sent to makeshift quarantine camps

Families in Asia's financial hub of Hong Kong are suffering isolation and trauma after strict coronavirus rules have led to babies being separated from parents and those with newborns herded into tiny quarantine quarters for up to 14 days.

Hong Kong authorities have ordered that anyone testing positive for the virus must go to hospital, including babies, while all their close contacts, even those, who test negative, are sent to makeshift quarantine camps.

"It’s crazy," said one mother, who said, she had to abruptly stop breastfeeding following separation from her seven-month-old son last week after she was diagnosed with COVID-19.

"I got fever last night because I have gone from breastfeeding to 100% pumping," said the woman, who asked not to be identified.

The separation of families over the virus is not common in other developed cities, say legal experts.

Hong Kong's government did not immediately respond to requests for comment.

Shahana Hoque-Ali, a scientist, who moderates the Hong Kong Quarantine support group on Facebook, said it had assisted in more than 100 cases of children, who had faced separation from their parents over the past year, with dozens in the past week.

She urged families to push back against such steps, saying they should stay with their children, particularly those being breastfed.

Many expatriate families with young children were among the hundreds of residents sent to quarantine last week after an outbreak at a popular upmarket gym in Hong Kong's Sai Ying Pun district.

That case has ensnared bankers, lawyers and the city’s international school network, with some teachers and students infected.