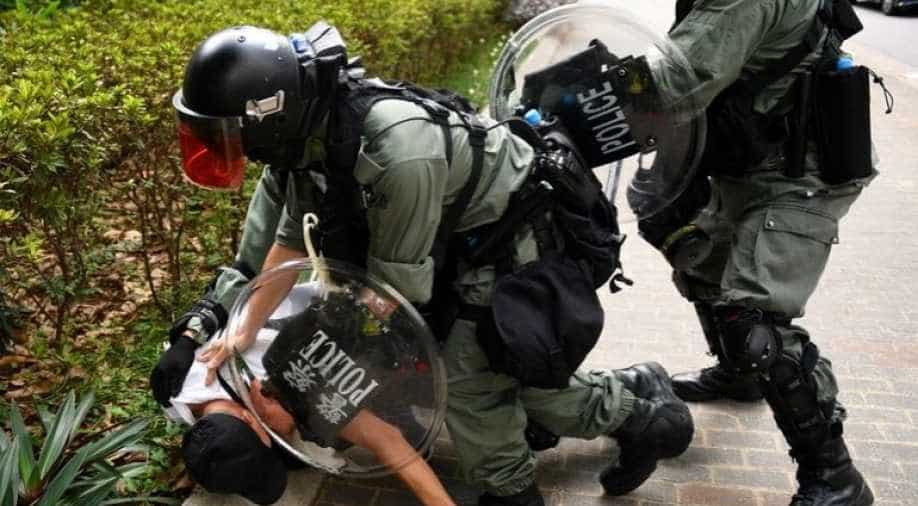 Hong Kong police detain a man for an unknown reason outside a shopping centre in the Tai Koo area. Photograph:( AFP )

A murder case that led to mass street protests in Hong Kong should be handled independently by Taiwan, authorities in the Chinese-ruled city said

A murder case that led to mass street protests in Hong Kong should be handled independently by Taiwan, where the suspect allegedly committed the crime, authorities in the Chinese-ruled city said.

Chan Tong-kai, a Hong Kong citizen, was accused of murdering his girlfriend in Taiwan last year before fleeing back to the financial hub. Hong Kong leader Carrie Lam held up Chan's case as an example of why an extradition bill, that would have allowed suspects to be sent from Hong Kong to greater China - including the mainland, Taiwan and Macau - was needed.

Hong Kong has been reeling from five months of unrest originally triggered by the extradition bill but which has now evolved into a pro-democracy movement. The government has announced it will withdraw the bill, but the protests have not stopped.

Chan has offered to voluntarily surrender himself to Taiwan on release from prison in the former British colony where he has been serving a 29-month sentence for money laundering, the chief executive's office said.

Taiwan has said Chan's offer to give himself up was not sufficient and formal talks were needed with Hong Kong authorities.

Taiwan authorities argue that his extradition without a legal assistance framework would damage the self-ruled island's sovereignty and put Taiwan under the "one China" framework.

Taiwan's Premier Su Tseng-chang said on Tuesday the government had requested legal assistance and warned Hong Kong not to "politically manipulate" the case.

Beijing considers Taiwan to be a wayward province of "one China", ineligible for state-to-state relations and has never renounced the use of force to bring the island under its control.

Hong Kong has said the case can be handled without any further discussions as all relevant evidence was in Taiwan, giving it absolute jurisdiction over the case.

"The surrender does not present any obstacle in terms of legal principles and procedures...The case can totally be handled independently," the Hong Kong government said in a statement late on Monday.

Chan was arrested by police in Hong Kong in March 2018 and local authorities were only able to find evidence against him for money laundering.

Explainer: What will a Marcos presidency in the Philippines look like?

‘Is that road to Atlantis?’ Deep-sea divers discover mysterious yellow brick path in the Pacific