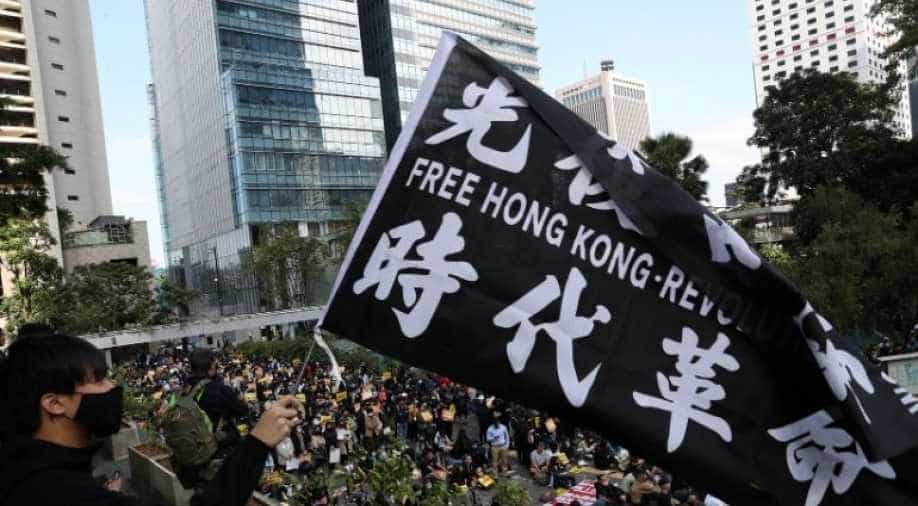 Hundreds of office workers in Hong Kong's business district gathered on Monday for the first in a week of lunchtime protests backing the pro-democracy movement after its resounding victory in district polls held last week in the Chinese-ruled city.

A day earlier police again resorted to firing tear gas to disperse thousands of protesters as they marched past the city's Kowloon waterfront, after first going to the US consulate on Hong Kong island to show gratitude for Washington's support.

There was no such confrontation at the two-hour rally in the central business district on Monday, as some people went back to their offices after their demonstration of solidarity. Others said they would be striking for the full five days.

The gathering in Chater Garden probably drew Hong Kong's best-dressed protesters, and organisers have called on them to come out every day this week.

Protests over the last six months have drawn a wide swathe of Hong Kong society, from students to pensioners. Even white-collar professionals, like those in Chater park, have sometimes blocked roads in recent weeks, leading to face-offs with police.

Fred, a 24-year-old advertising professional said he and his colleagues had helped create promotional materials in their own time for the so-called "yellow economy", the businesses seen as supporting the pro-democracy movement.

Many pro-democracy protesters have adopted the colour yellow and yellow balloons have been seen at rallies.

"From the advertising perspective, we can help promote the brands that speak out for Hong Kong," said Fred.

Another protester in the park said his advertising agency had closed for the week in solidarity and hoped other agencies would do likewise.

"We are just stopping work for companies. But the advertising talent will keep advertising for the movement, designing posters and leaflets."

During Sunday's protest, police fired tear gas to disperse thousands of anti-government protesters, some of whom chanted "revolution of our time" and "liberate Hong Kong". That followed a period of relative calm after November 24 district elections delivered an overwhelming victory to pro-democracy candidates.

The protest in the busy shopping district of Tsim Sha Tsui followed a "thanksgiving" march by hundreds to the US consulate.

Shops and businesses in Tsim Sha Tsui closed early as police sprayed volleys of tear gas at demonstrators, arresting some and forcing hundreds to flee towards the harbour.

The protesters' demands include an end to Beijing's alleged meddling in the freedoms promised to the former British colony when it returned to Chinese rule in 1997, universal suffrage and an inquiry into police use of force.

The unrest since June has at times forced the closure of government offices, businesses, schools and the international airport, helping drive the city into recession for the first time in a decade in the third quarter.