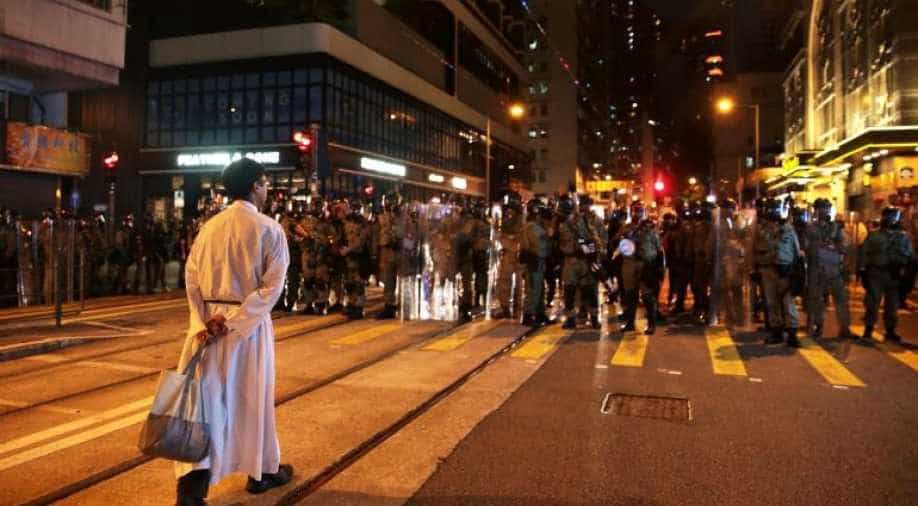 On the day of violence, many residents and organizations gathered at the Hong Kong Police Headquarters and expressed their firm support for the Hong Kong police and their law enforcement operations.

People from all walks of life in Hong Kong have strongly condemned the recent violent acts that are harming the city's image and disrupting its order, and are calling for the return to rationality and peace.

The residents have denounced the rioters' destabilizing behaviour and lamented the negative impact brought by the unrest.

"The roads are blocked and our citizens can't go to work, which is a significant blow to our economy. In the last two months, many of our retail industries and many business activities have been suspended," said Chan Kin-Keung, president of the executive committee of the Association of Hong Kong Professionals.

"Many people want to contribute to Hong Kong's economy, but they (the radicals) adopted a 'non-cooperation campaign', which stops others from working and stops Hong Kong from developing its economy. We feel pained by this," said Ip Chun-yuen, a lawyer in Hong Kong.

Another also decried the disruption caused by the violence.

"The residents are deeply worried about Hong Kong's future and public security. In the past, they could go anywhere they wanted to go. Now before they go out, they have to check and avoid the places where the rioters are," said Chan Han-pan, a member of the Legislative Council (LegCo) of the Hong Kong Special Administrative Region (HKSAR).

According to the Hong Kong International Airport, at least 200 flights were cancelled on Monday following the strike of airline workers under the "non-cooperation campaign".

"It is a blow to the local economy. It is also impacting Hong Kong people's ability to go out and work," said a passenger at the airport.
Tung Chee-Hwa, vice chairman of the National Committee of the Chinese People's Political Consultative Conference, called on Hong Kong residents on Monday to say no to those attempting to destroy Hong Kong with violence.

On the same day, many residents and organizations gathered at the Hong Kong Police Headquarters and expressed their firm support for the Hong Kong police and their law enforcement operations.

"A stable society is the only foundation for development. Only when the police operate effectively can we maintain order, develop our economy, bring our people a good life and free them of fear," said Ho Chun-yin, a LegCo member.

Latest data shows that the protests have put huge downward pressure on Hong Kong's economy. This has prompted many residents to call for a society with the order to safeguard prosperity, stability and the hard-won good life of the residents of Hong Kong.

"We must communicate with sense. Because violence is not permitted in such a society like Hong Kong, which has the rule of law. We should keep an open mind and work together to continue building Hong Kong into the beautiful home that we have always known," said Noel Shih, a member of the Democratic Alliance for the Betterment and Progress of Hong Kong.

According to the Hong Kong police, they arrested 148 people during Monday's operations. The suspects were arrested for various offences including unlawful assembly, assaulting police and possession of offensive weapons. Seven police officers were injured during the operations.