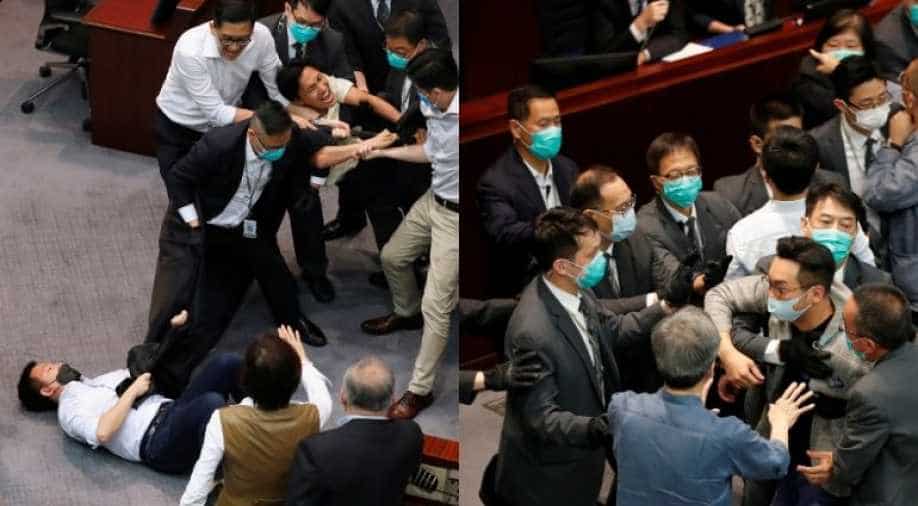 The committee chair's position has been vacant since October. Pro-democracy lawmakers have been using delaying tactics to ensure that an appointment is not made.

Before the COVID-19 pandemic swept through Hong Kong. The city-state was up in arms against mainland china over a controversial extradition bill.

As COVID-19 cases slow down to a trickle, these tensions are flaring up once again. This time over another controversial bill that seeks to criminalise any insults to the Chinese national anthem.

Legislators in the Hong Kong assembly came to blows over this controversial bill. This is the second time this month that clashes have broken out between pro-China and pro-democracy lawmakers.

Some of the pro-democracy lawmakers were forcefully removed from the chamber by security guards. The scuffle broke out in the house committee which is tasked with reviewing bills before lawmakers vote on it.

The committee chair's position has been vacant since October. Pro-democracy lawmakers have been using delaying tactics to ensure that an appointment is not made.

On Monday however, pro-China legislators unilaterally appointed an official to lead the committee. This enraged the pro-democracy camp, which considers the move to be illegal.

Some lawmakers tore up the assembly rulebook and threw it at pro-China officials. The bill is scheduled to have a second reading on May 27 in the Hong Kong legislature.

Protesters are calling for a city-wide demonstration on that day. Although Hong Kong participates as a separate entity in sporting events, they have the same national anthem as China.

Sporting fans have often booed at the Chinese national anthem inside stadiums. In response, Beijing passed a bill against insulting its national anthem.

But as per the agreement between mainland China and Hong Kong. All laws passed by the Chinese communist party will have to ratified by the hong kong legislature.

Hong Kong police have also charged 15 pro-democracy activists over their role in last year's protests. All 15 of them were arrested last summer as well. Some of them are former lawmakers.

Most of them were bailed out, but few of them used the opportunity to criticise the govt publicly in court.