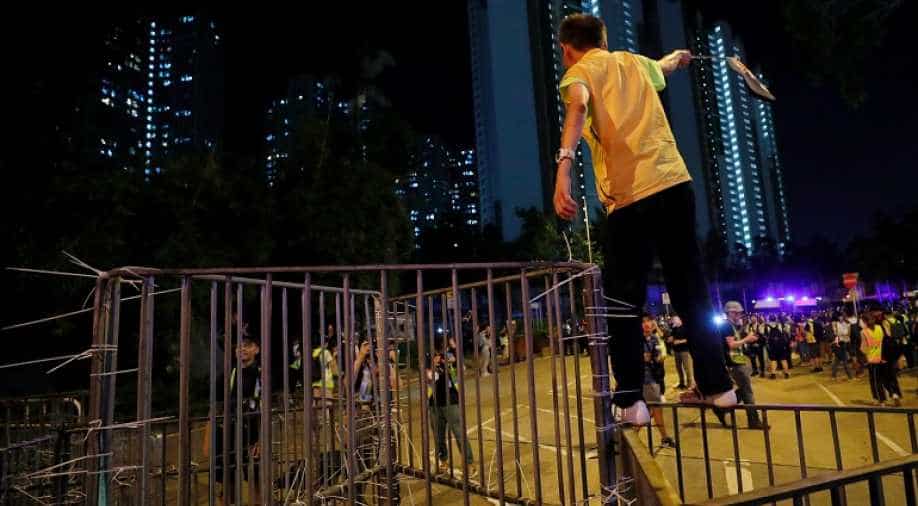 A protester balances himself on the barriers after a march at Sheung Shui, a border town in Hong Kong, China July 13, 2019. Photograph:( Reuters )

Protesters threw umbrellas and hardhats at police, who retaliated by swinging batons and firing pepper spray.

Hong Kong protesters clashed with police on Saturday in a town near the boundary with mainland China where thousands rallied against the presence of Chinese traders, seizing on another grievance following major unrest over an extradition bill, reported news agency Reuters.

The demonstration in the Hong Kong territorial town of Sheung Shui, not far from the Chinese city of Shenzhen, began peacefully but devolved into skirmishes and shouting, the report added.

Protesters threw umbrellas and hardhats at police, who retaliated by swinging batons and firing pepper spray.

Later, Hong Kong police urged protesters to refrain from violence and leave the area. By around 8:30pm (1230 GMT), most had retreated as police in riot helmets and wielding large shields swept through the town to reclaim the streets.

The protest was the latest in a series that have roiled the former British colony for more than a month, giving rise to its worst political crisis since its 1997 handover to China.

Sometimes violent street protests have drawn in millions of people, with hundreds even storming the legislature on July 1 to oppose a now-suspended extradition bill that would have allowed criminal suspects in Hong Kong to be sent to China to face trial in courts under ruling Communist Party control.