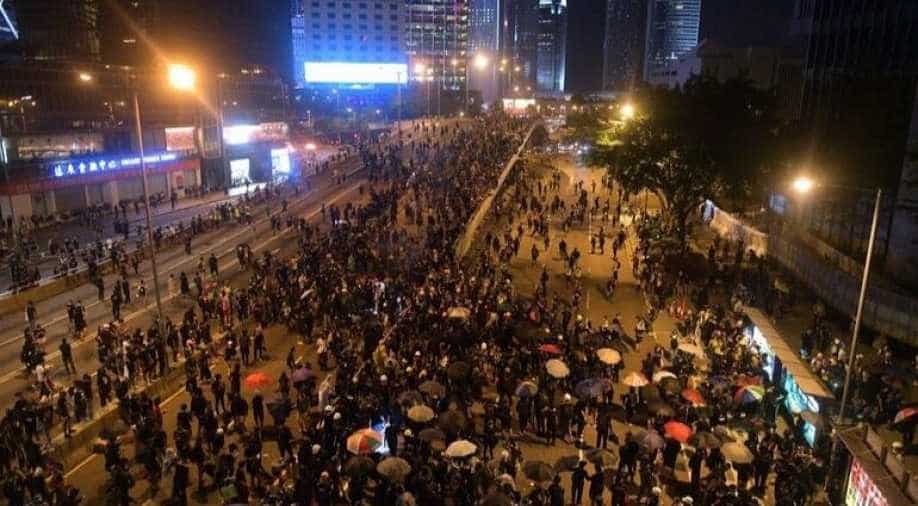 Protesters occupy a main road outside the central government offices in the Admiralty area in Hong Kong on September 28, 2019, on the fifth anniversary of the "Umbrella Movement".  Photograph:( AFP )

A water cannon truck fired on masked protesters who were throwing projectiles and petrol bombs towards Central Government Offices.

Hong Kong police fired water cannon Saturday night at a group of hardcore protesters who hurled Molotov cocktails not far from a park where tens of thousands of pro-democracy protesters were rallying peacefully.

A water cannon truck fired on dozens of masked protesters who were throwing projectiles and petrol bombs at the Central Government Offices, a building which has frequently come under attack during this summer's huge, sometimes violent protests.

Tens of thousands of Hong Kongers gathered Saturday night to mark the fifth anniversary of the "Umbrella Movement", the failed pro-democracy campaign that laid the groundwork for the massive protests currently engulfing the finance hub.

Huge crowds chanting slogans and singing protest songs crammed into a park outside the city's parliament, the same site that was the epicentre of the 2014 protests.

Hundreds later spilled out onto the main road outside the city's government offices.

The Umbrella Movement exploded when huge crowds came out after police fired tear gas at a student-led rally which had taken over the same highway -- and was named after the ubiquitous tool people used to defend themselves from the police.

Both 2014's protests and the current demonstrations were fuelled by fears that Beijing is eroding freedoms in the semi-autonomous Chinese city and frustrations over the lack of direct elections.

But the character of the protests has noticeably hardened in the intervening years.

Compared to the current strife - where street battles have erupted for 16 consecutive weeks - 2014's protests were softer, with students completing classwork in the camps, recycling their waste, and the police largely avoiding direct conflict during the 79-day occupation of three key intersections.