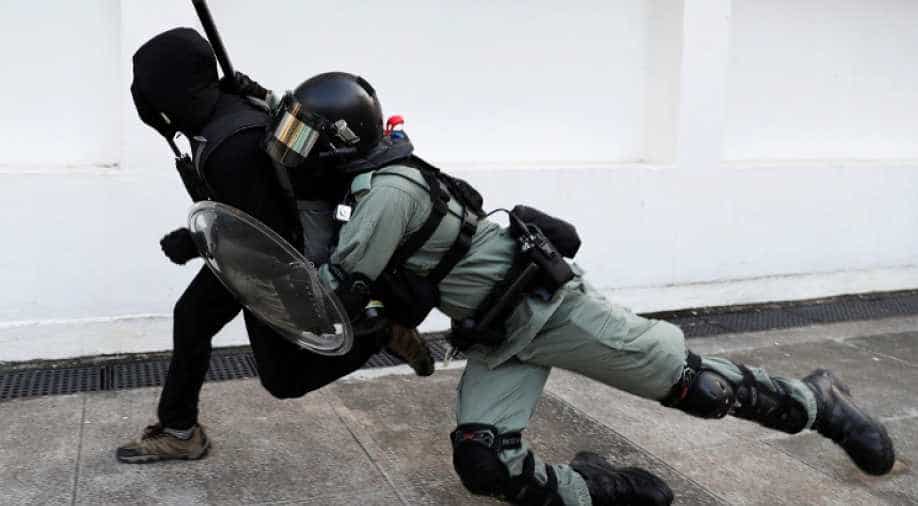 Just days after a student protester was killed in Hong Kong, city police officer shot at masked protesters on Monday as a new wave of violence hit Asia's financial centre.

WION's correspondent in Hong Kong was caught in the crossfire between security officials and protesters as demonstrations turned violent on Monday.

The latest incident of violence took place in Sai Wan Ho district as police tried to detain masked protesters at a Metro junction, amid the confusion a protester approached an officer and was shot in the chest which was broadcast live on Facebook.

The police reportedly again opened fire, firing two more live rounds as another protester fell on the ground. Both protesters were detained, according to reports.

There were other incidents of violence reported across the city in Lung Cheung road area including in Connaught Central and Pedder Street.

AFP quoting hospital authorities said three people were admitted after the firing incident, one with a gunshot wound.

A huge blaze was reported on the footbride of Hong Kong Polytechnic University which was later doused by firefighters.

The police also clashed with protesters in Peddar Street, a cannister reportedly hit the demonstrators.

On Friday, the protesters marked the death of university student with candlelight vigils as gloom descended on the city.

The violence centred around Nathan Road in the Kowloon district, a hotspot for tourists. Several shops were vandalised and entrance to the Metro blocked as authorities tried to stop the surge of protesters.

Chow Tsz-lok,22, a student who studied at University of Science and Technology (UST) died last week when he fell from the third to the second floor of a parking lot when protesters were being dispersed by police. It was the first student death in Hong Kong in over five months of protests.