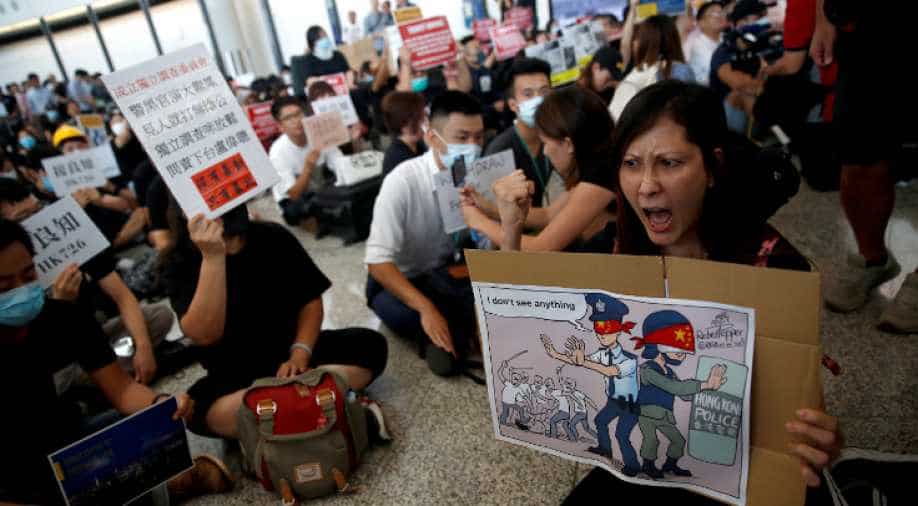 On Friday, protesters shouting "free Hong Kong" made their way to the airport calling on the Chinese government to withdraw the extradition bill.

"I also want to emphasise that since the reunification of Hong Kong, the Hong Kong garrison has strictly abide by Hong Kong's Basic Law and Garrison Law, and faithfully fulfilling its duties of defence. They have become the guardian for maintaining Hong Kong's long-term prosperity and stability," the ministry spokesman said.

"We have already said that Hong Kong is China's Hong Kong and will never allow any foreign forces to intervene in any way."

"I recommend those who try to 'lead the wolf into the room' to study the history -- since when have those who colluded with external forces to create problems for a country come to a good end?" China foreign ministry spokesperson Hua Chunying said.

On Friday, protesters shouting "free Hong Kong" made their way to the airport calling on the Chinese government to withdraw the extradition bill which has become a bone of contention with protests and violence seen on the city streets for the past two months.

As the protesters gathered at the airport, Singapore urged its citizens in a travel advisory on Friday to avoid parts of Hong Kong where protests may be taking place. Some protesters were seen handing out flyers explaining the city's crisis to tourists.

"Protests which are meant to be peaceful may still have the potential to turn violent with little or no notice," it warned citizens.

The Flight Attendants' Union for Hong Kong's main carrier Cathay Pacific had earlier urged its members to "stand up for our human rights and be connected with the rest of the HongKongers" on its Facebook page.

Meanwhile, reports added that Hong Kong is bracing itself for another weekend of rallies.

The police have banned a planned Saturday protest as authorities grapple with huge demonstrations which has disrupted normal life in the former British colony.