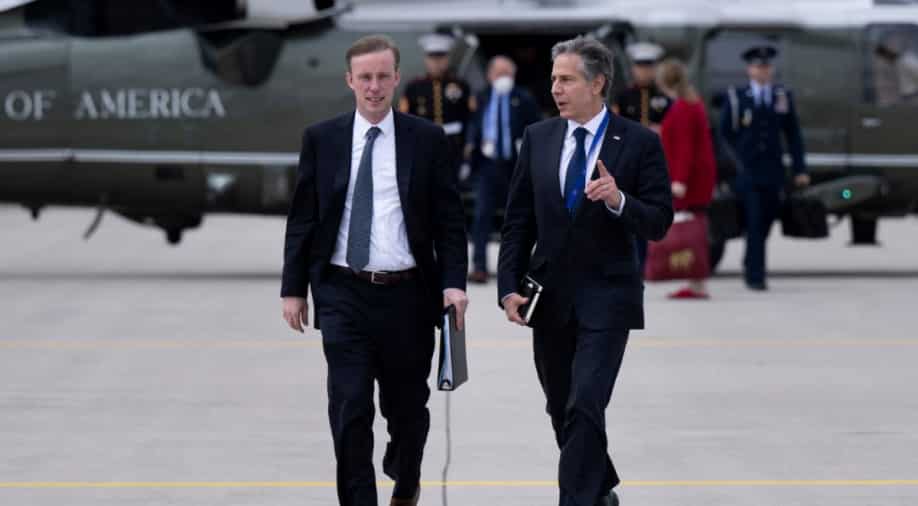 US National Security Advisor Jake Sullivan (L) and US Secretary of State Antony Blinken speak as they walk to Air Force One at Munich Airport in Munich on June 28, 2022, after a G7 summit and enroute to Madrid for a NATO summit. Photograph:( AFP )

Calling for the restorement of the personal freedom of Hong Kong citizens, US Secretary of State Antony Blinken expressed Washington's solidarity with them

25 years after Hong Kong's handover to China from Britain, the United States has slammed the "erosion of autonomy" of the city.

Calling for the restorement of the personal freedom of Hong Kong citizens, US Secretary of State Antony Blinken expressed Washington's solidarity with them.

In a statement, Blinken said "It is now evident that Hong Kong and Beijing authorities no longer view democratic participation, fundamental freedoms, and an independent media."

Under the deal that ended British colonial rule in 1997, China failed to meet its commitment to respect a "One Country, Two Systems" arrangement, according to Blinken.

With once annual pro-democracy demonstrations now silenced, Chinese President Xi Jinping on Friday is to preside over somewhat muted celebrations marking the handover of the city from Britain to China.

In "an effort to deprive Hong Kongers of what they have been promised," China implemented a strict security law which led to the closure of media outlets and the jailing of opposition figures, said Blinken.

Amid the coronavirus pandemic, in his first known trip outside the mainland in more than two years, Jinping will swear in the global financial hub's new leader John Lee.

Saying the city needed to beef up its national security arrangements, Jinping had warned against any acts endangering China's sovereignty on his last visit to Hong Kong.