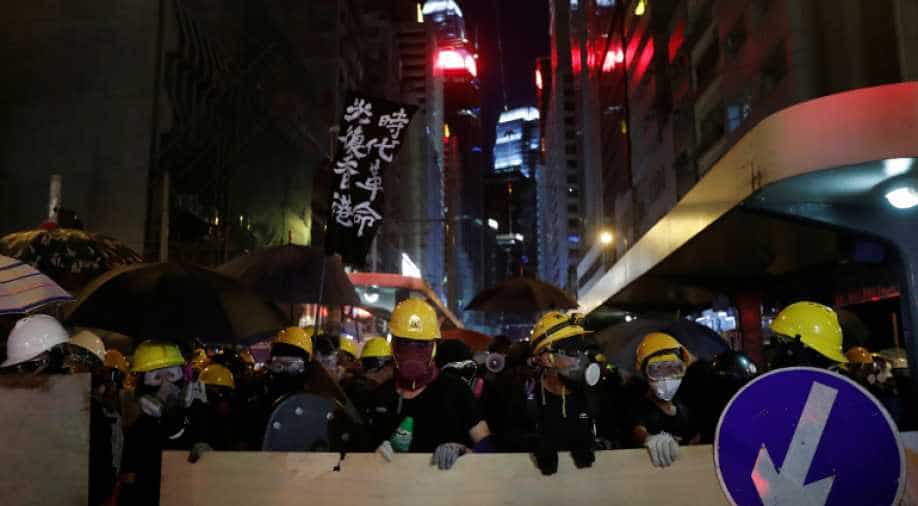 Hong Kong police clashed with thousands of protesters on Sunday, as they sought to defend China's main representative office.

China's central government on Monday reiterated its support for Hong Kong leader Carrie Lam, as well as the city's police, and called on Hong Kong people to oppose violence following another weekend of clashes between protesters and police.

Hong Kong has been rocked by protests over the past two months against a proposed bill that would allow people to be extradited from the city to stand trial in Communist Party-controlled courts in mainland China.

Yang Guang, the spokesman of the Hong Kong and Macao Affairs Office of China's State Council, said he hoped people "from all walks of life in Hong Kong will clearly oppose and resist violence".

Yang said the violence, which he blamed on a "few radicals", had seriously undermined Hong Kong's prosperity and stability, and "bumped into the bottom line" of the "one country, two systems" principle that governs the financial hub.

"No civilised society or rule of law society will tolerate rampant violence," Yang said at an extraordinary press conference.

"We hope that the general public will clearly understand the seriousness of the current state of affairs and jointly denounce the bad actions and crimes committed by radicals, and prevent them from harming Hong Kong," he said.

China's Hong Kong and Macao Affairs Office of the State Council said at a media briefing in Beijing that Hong Kong's government and society needed to come up with more effective ways to help young people address concerns over housing, employment and other issues.

Hong Kong police clashed with thousands of protesters on Sunday, as they sought to defend China's main representative office from crowds seething over what many see as an increasing cycle of violence against them.

Protests over the past two months spearheaded by anti-government activists against a proposed bill that would allow people to be extradited from the city to stand trial in courts in mainland China have grown increasingly violent.

"We also believe that Hong Kong's top priority task right now is to punish violent and unlawful acts in accordance with the law, to restore social order as soon as possible, and to maintain a good business environment," said another Hong Kong affairs spokeswoman, Xu Luying, at the press conference.

A march on Saturday against an assault the previous weekend by suspected triad gang members ended in violent turmoil as riot police waded in to disperse crowds.

On Sunday, a peaceful gathering in a park in the city's central business district rapidly morphed into a march, as tens of thousands of black-clad protesters set off in several directions, clogging up major thoroughfares.

Thousands of people headed east, towards the shopping district of Causeway Bay, while another large contingent headed west, towards the Chinese government's representative office, known as the Central Government Liaison Office.

There, hundreds of riot police blocked activists from advancing towards the building, which had been heavily fortified with barricades after it was surrounded and defaced a week earlier. A clear plastic shield had been erected around a national emblem above its front doors.

As the crowds surged, hundreds of riot police with shields advanced, firing rounds of tear gas, rubber bullets and sponge grenades - a crowd-control weapon - at protesters, sending clouds of acrid, burning smoke through the streets.