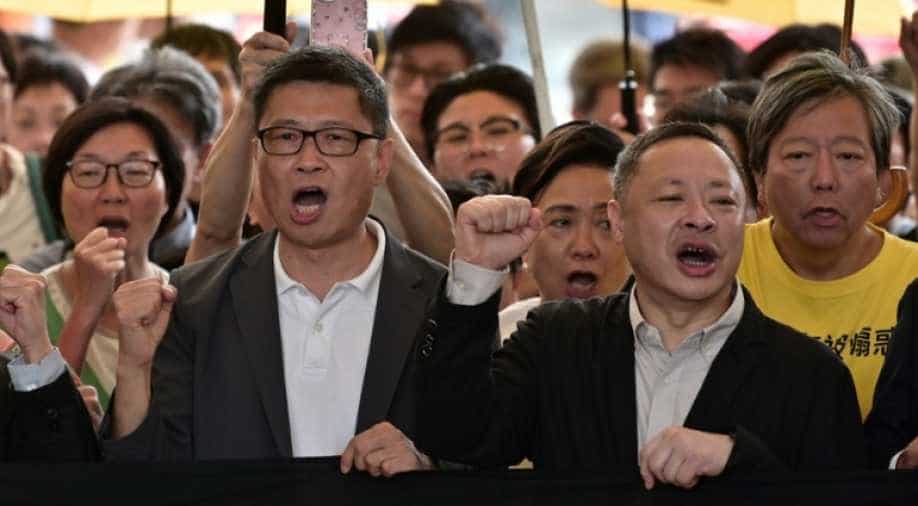 The prison terms are the latest hammer blow to the city's beleaguered democracy movement which has seen key figures jailed or banned from standing as legislators since their demonstrations shook the city but failed to win any concessions.

Four prominent leaders of Hong Kong's democracy movement were jailed on Wednesday for their role in organising mass protests in 2014 that paralysed the city for months and infuriated Beijing.

The prison terms are the latest hammer blow to the city's beleaguered democracy movement which has seen key figures jailed or banned from standing as legislators since their demonstrations shook the city but failed to win any concessions.

Nine activists were all convicted earlier in April of at least one charge in a prosecution that deployed rarely used colonial-era public nuisance laws over their participation in the Umbrella Movement protests, which called for free elections to appoint the city's leader.

Their trial renewed alarm over shrinking freedoms under an assertive China which has rejected demands by Hong Kongers for a greater say in how the financial hub is run.

Two other leaders -- activist Raphael Wong and lawmaker Shiu Ka-chun -- received eight months while the rest either had their jail terms suspended or were given a community service order.

One defendant, lawmaker Tanya Chan, had her sentencing adjourned because she needs surgery for a brain tumour.

The jail terms are the steepest yet for anyone involved in the 79-day protest which vividly illustrated the huge anger -- particularly among Hong Kong's youth -- over the city's leadership and direction.

As Wong was led away by guards he proclaimed: "Our determination to fight for democracy will not change."

Tai and Chan founded a civil disobedience campaign known as "Occupy Central" in 2013 alongside 75-year-old Baptist minister Chu Yiu-ming, one of the defendants to have his jail term suspended.

Their original idea of taking to the streets to demand a fairer system and the right to directly elect Hong Kong's leader was a precursor to the student-led Umbrella Movement a year later that brought parts of the city to a standstill.

Authorities in Hong Kong and the mainland have defended the prosecutions as a necessary measure to punish the leaders of a direct action movement that took over key intersections of the city for many weeks.

But activists and rights groups have argued that the use of the vaguely worded public nuisance laws -- and wielding the steeper common law punishment -- is an insidious blow to free speech and a new tactic from prosecutors.

"The long sentences sends a chilling warning to all that there will be serious consequences for advocating for democracy," said Maya Wang, Human Rights Watch's senior researcher on China.

But city leader Carrie Lam remained unmoved by such criticisms. Asked by reporters on Wednesday whether the jailings would damage Hong Kong's free speech reputation, she replied: "I can't see any impact."

There were emotional scenes outside the courthouse with the defendants met by a noisy crowd of supporters shouting "Add Oil!", a popular Cantonese phrase to signal encouragement.

Others sang "We Shall Overcome", the gospel song that became an anthem of the civil rights movement in the United States.

Speaking after the sentencing, Tanya Chan told the crowds: "I hope Hong Kongers will not lose hope, will not be afraid, will not have regrets or back down now".

Many supporters were holding umbrellas, an emblem of the 2014 protests after they were used by young demonstrators to defend themselves against police batons, tear gas canisters and pepper spray.

Joseph Lo, 59, was wearing a yellow T-shirt with the phrase "I was not incited" -- a reference to the charges laid against the protest leaders.

"We were not incited by these nine people," he told AFP, adding he hit the streets in 2014 because of the refusal to grant Hong Kongers universal suffrage and the police's decision to fire tear gas at protesters.

While the financial hub enjoys rights unseen on the Chinese mainland under a 50-year handover agreement between Britain and China, there are fears those liberties are being eroded as Beijing flexes its muscles and stamps down on dissent.

Hong Kong's leader is elected by a group of just 1,200 largely pro-Beijing appointees, in a city of seven million.

Judge Johnny Chan ruled that the 2014 protests were not protected by Hong Kong's free speech laws because the demonstrations impinged on the rights of others.

During sentencing, Chan said the defendants had expressed no regret for the "inconvenience and suffering caused to members of the public". He added that an apology was "rightly deserved... but never received" from the protest leaders.