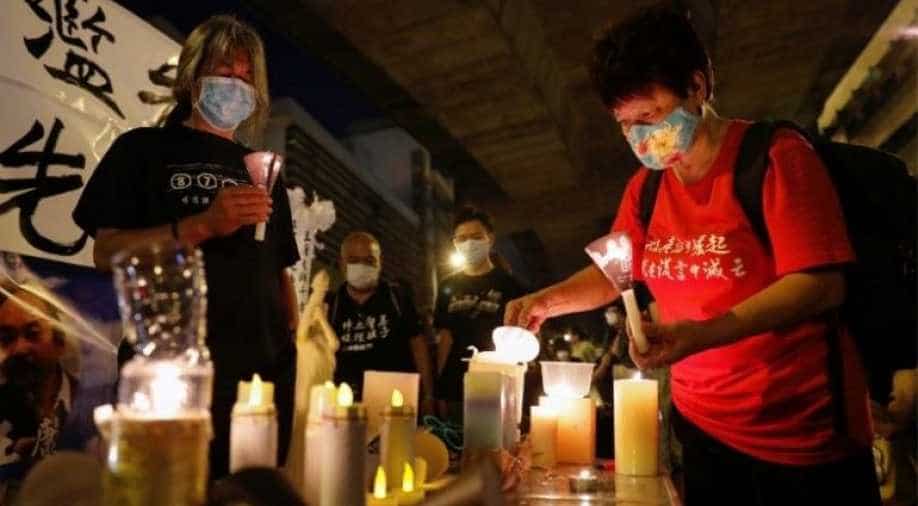 A vigil is held in Hong Kong on the anniversary of the 1989 Tiananmen square crackdown. Photograph:( Reuters )

The Tiananmen vigil in Hong Kong was banned last year for the first time in 30 years, with officials citing the curbs on movement to prevent the spread of the coronavirus

The Hong Kong Alliance, which has organised the annual vigil for more than three decades, said police cited the ongoing coronavirus pandemic in their refusal.

"We will continue to fight for the right to mourn June 4 lawfully," the alliance said, adding it planned to appeal.

Security minister John Lee confirmed the ban, saying "anyone who participates in it (the vigil) will violate the law", and warned a sweeping new national security law that Beijing imposed on Hong Kong last year could be used against those who defy the ban.

"The national security law clearly states that if anyone organises, plans or carries out any illegal means to damage or overthrow the fundamental system under the Chinese constitution, it would constitute subverting state power," he told reporters.

International rights groups, Western governments and many in Hong Kong say Beijing is shifting the former British colony on to a more authoritarian path since it imposed a national security law on the city last June.

The security law combined with coronavirus restrictions have cleared the city's streets of protesters after anti-government demonstrations plunged the financial hub into turmoil in 2019.

The Tiananmen vigil in Hong Kong was banned last year for the first time in 30 years, with officials citing the curbs on movement to prevent the spread of the coronavirus.

Life in Hong Kong has largely returned to normal since the outbreak of COVID-19, with schools re-opened, most workers back in offices and restaurants and shopping malls full.

The government has still restricted outdoor gatherings to no more than four people, a move critics say is aimed at preventing any repeat of the 2019 protests.

This year, the anniversary is particularly awkward for Beijing, which is celebrating the 100th anniversary of the Communist Party.

When asked if commemorating the victims of Tiananmen would violate the new security law, Hong Kong leader Carrie Lam said in April it was important to show respect to the Party.

In previous years, tens of thousands have descended on the city's Victoria Park to light candles in a peaceful vigil to remember those who died in the violence in and around Tiananmen Square.

The death toll given by officials days after the crackdown was about 300, most of them soldiers, with only 23 students confirmed killed. China has never provided a full accounting of the violence, but rights groups and witnesses say the figure could run into the thousands.