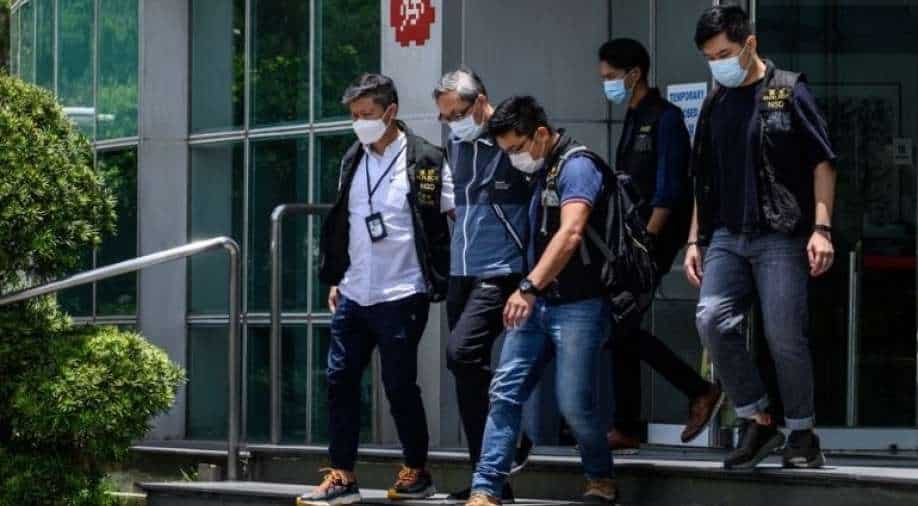 Cheung Kim Hung (C), CEO and executive director of Next Digital limited, is escorted by police from the offices of the local Apple Daily newspaper to a nearby vehicle in Hong Kong Photograph:( AFP )

Cheung Kim-hung, the chief executive officer of Hong Kong Media group Next Digital has been denied bail over the comments made by UK justice secretary Dominic Raab.

A court in Hong Kong said Cheung has ''close association'' with foreign political groups and pointed out he had been awarded a US congressional medal as well.

Next Digital, owned by jailed media tycoon Jimmy Lai, is the publisher of Apple Daily, a popular pro-democracy newspaper that closed recently after its newsroom had been raided by 500 police officers investigating whether some articles breached the security law.

After the forced closure of Apple Daily, Raab had said that it was a ''tool to curtail freedoms and punish dissent, rather than keep public order.''

Earlier in June, Cheung was charged with ''collusion with a foreign country or with external elements to endanger national security'' under the region’s contentious national security law that has faced international condemnations and stoked fears over media freedoms in the financial hub.

As part of his bail application, Cheung had offered to resign their roles at Apple Daily, not speak to media and foreign politicians and pay cash bail worth HK$3 million ($386,463.47).

The National Security Law punishes what Beijing broadly refers to as secession, subversion, terrorism, and collusion with foreign forces with up to life in prison.

Under the security law, the onus is on defendants to prove they will not pose a security threat if released on bail.

The arrests and scale of the Apple Daily raid have been criticised by Western nations, global rights groups, press associations, and the chief UN spokesperson for human rights.