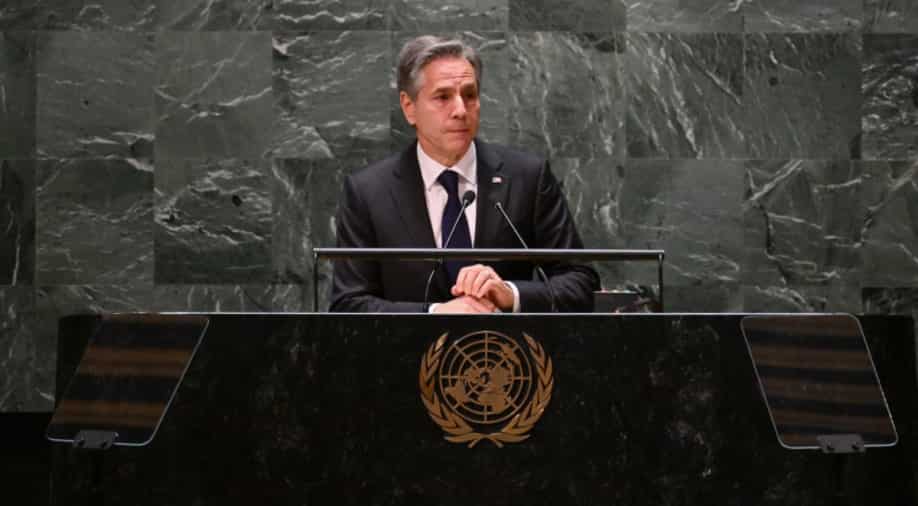 US Secretary of State Antony Blinken speaks during the 2022 Review Conference of the Parties to the Treaty on the Non-Proliferation of Nuclear Weapons at the United Nations in New York City Photograph:( AFP )

Accusing Moscow of using it as a 'nuclear shield' in attacks on Ukrainian forces, Blinken said Washington was 'deeply concerned' that Moscow was now using the plant as a military base.

Accusing Moscow of using it as a "nuclear shield" in attacks on Ukrainian forces, Blinken said Washington was "deeply concerned" that Moscow was now using the plant as a military base.

After nuclear nonproliferation talks at the United Nations in New York, Blinken told reporters  that "Of course, the Ukrainians cannot fire back lest there be a terrible accident involving the nuclear plant."

Calling it a "nuclear shield," Blinken said Russia's actions went beyond war crimes and it should be punished for it.

If the vital interests of the US or its allies were in danger, then also Washington would only consider the use of nuclear weapons in extreme circumstances according to Blinken.

It comes after Russian President Vladimir Putin said that nuclear war should not be unleashed as there could be no winners in such a war.

Blaming trade for the attack on a prison in Olenivka, both Ukraine and Russia accused each other of killing dozens of prisoners of war captured after the fall of Mariupol.

While Kyiv said Russia was behind the of shelling the prison to cover up the alleged torture and execution of Ukrainians, Moscow claimed that Ukraine’s military used US-supplied precision High Mobility Artillery Rocket System rockets to strike the prison.

During the first weeks of its invasion of Ukraine, Russia was accused of firing shells dangerously close to the Zaporizhzhia plant.