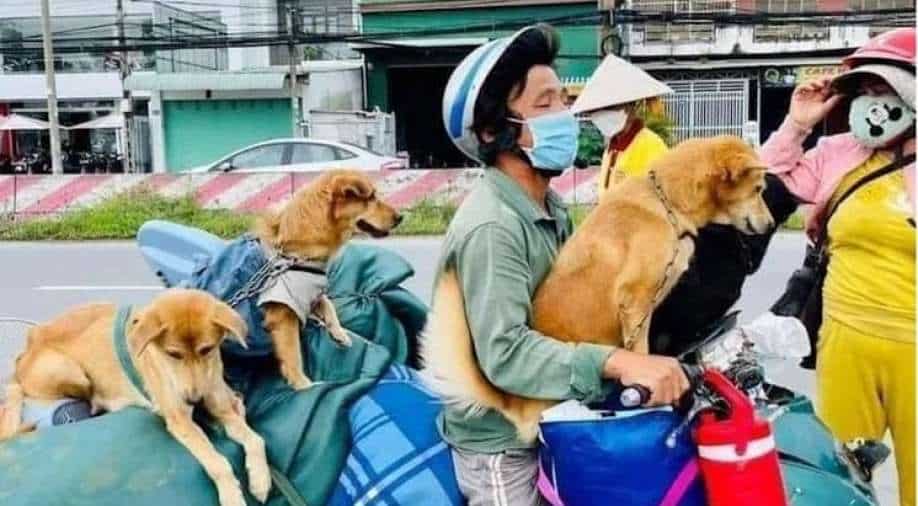 Pham Minh Hung and his wife, Nguyen Thi Chi Em were devasted when Vietnamese authorities culled their 12 dogs without their consent over fear of Covid transmission.

When their story was documented on the social media app TikTok, a huge row erupted with many slamming the officials over poor treatment of animals.

Now, with the help of donors, the Vietnamese couple has rescued and adopted 15 puppies, some of whom were on their way to dog meat shops.

It all began last year when photos and videos of the couple travelling with a pack of dogs on motorbikes went viral on social media.

According to reports, they left their house in Long An Province and went to their relative's place to stay at the southern Ca Mau province, to escape from rising Covid infections.

Unfortunately, the couple and their three relatives caught Covid after reaching Khanh Hung. They were then transferred to a hospital for treatment, while their animals were left at a quarantine centre.

It was said that local officials killed the animals without their owners’ consent while they were receiving medical treatment.

The officials claimed that it is was a “necessary preventative measure” to stave off the Covid spread.

But the act was widely condemned by the Vietnamese public as being "barbaric" and "cruel".

The 49-year-old said that the new dogs brought solace, but they still could not get over the brutal death of canines.

"When my dogs were killed, I was despondent and cried a lot. At the same time, we had Covid. My family was under a lot of pressure.

Acknowledging that it would be difficult to take care of their “children”, Pham said that his first priority is to find bricklaying work to save up enough money to become a lottery ticket seller — a job that gives him more time to take care of his puppies.