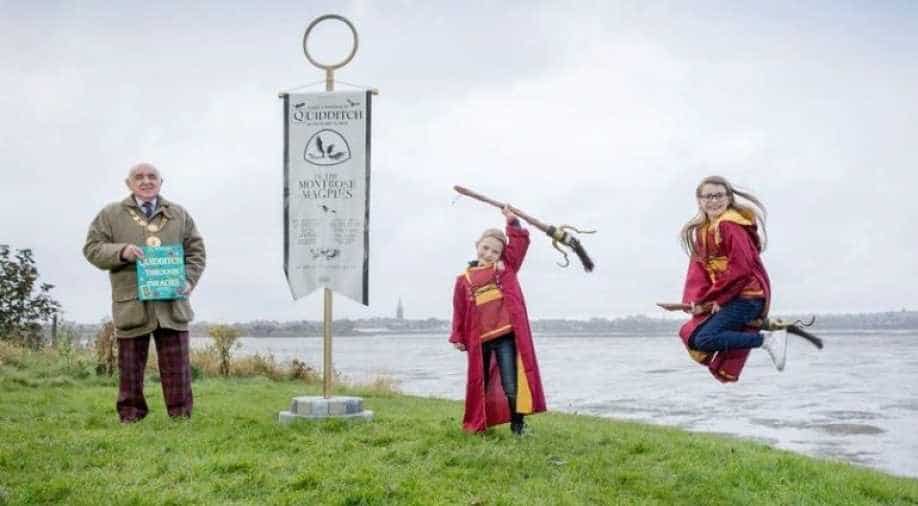 The locations in these towns have been honored with banners to mark the launch of a new sporting companion book to the Harry Potter series.

Written by J.K. Rowling and illustrated by Emily Gravett, "Quidditch Through The Ages Illustrated Edition" launches on Tuesday and features the UK towns of Holyhead, Falmouth, Ballycastle and Montrose among others, complete with their fictitious teams of the Holyhead Harpies, the Falmouth Falcons, Ballycastle Bats and the Montrose Magpies.

The decorative Quidditch banners bearing the crest and team name were presented in mayoral ceremonies and social-distanced celebrations across the UK and Ireland at iconic landmarks, from ancient castles like Falmouth's Pendennis Castle to craggy headlands such as Holyhead's South Stack to mark their honorary Quidditch Town status.

"I'm happy that Harry Potter has something connected to my town," said young fan and local resident, Riley McClymond of team Holyhead Harpies.

Further ceremonies will take place during this week - outdoors and within COVID-19 restrictions.

Two fictitious Quidditch towns are also being honoured, Chudley Cannons and Puddlemere United. Fans can pledge their virtual allegiance to any of the thirteen Quidditch teams by visiting the official Harry Potter fan club, Wizarding World, to view the banners in-situ and uncover more information about each Honorary Quidditch Town.

Quidditch is the sport that Harry Potter plays in the iconic boy wizard novels. It is played on a pitch with participants on broomsticks. To score points, players must throw the ball through hoops while chasing the elusive golden 'snitch'.

Real-life Quidditch was first adapted in 2005 by students at Middlebury College in Vermont, United States. A player with a tennis ball swinging from their trousers in a sock embodies the snitch. Teams from across the world battled it out at the annual International Quidditch Association World Cup, although the IQA World Cup 2020 has been postponed until next year and will be held in the U.S.