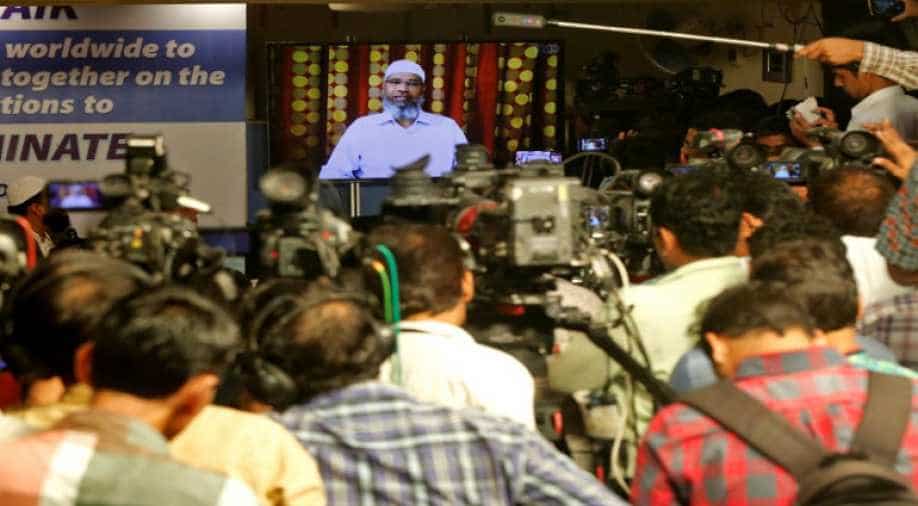 Zakir Naik, an Indian Islamic preacher and founder of Islamic Research Foundation, speaks to the media via a video conference in Mumbai, July 15, 2016. Photograph:( Reuters )

When Zakir Naik emerged from a prominent Malaysian mosque last month fans swarmed about him, seeking selfies with the Indian Muslim televangelist whose hardline views have sparked a criminal investigation back in his home country.

Accompanied by a bodyguard, Naik was making a rare public appearance at the Putra Mosque in Malaysia's administrative capital, where the prime minister and his cabinet members often worship.

Naik, who has been banned in the UK, has been given permanent residency in Malaysia and embraced by top government officials.

Critics see Naik's presence in Malaysia as another sign of top-level support for hardline Islam in a country with substantial minorities of Christians, Hindus and Buddhists, and which has long projected a moderate Islamic image.

Support for a more politicised Islam has grown in recent years under Prime Minister Najib Razak, especially after he lost the popular vote in the 2013 general election - the ruling coalition's worst-ever electoral performance.

Since then, his ruling party has been trying to appease an increasingly conservative ethnic Malay-Muslim base and religion has become a battleground ahead of elections the prime minister has to call by mid-2018.

Naik, a 52-year-old medical doctor, has aroused controversy with his puritan brand of Islam - recommending the death penalty for homosexuals and those who abandon Islam as their faith, according to media reports. A Youtube video shows Naik saying that if Osama bin Laden "is terrorizing America the terrorist, the biggest terrorist, I am with him".

Last week, India's counter-terrorism agency prepared charges against Naik, saying he has been "promoting enmity and hatred between different religious groups in India through public speeches and lectures."

Bangladesh suspended Peace TV channel, which features Naik's preachings after some media reports claimed bombers of a Dhaka cafe that killed 22 people last year were admirers of him. Islamic State claimed responsibility for the attack.

The Malaysian government accommodates Naik because "he remains a reasonably popular character amongst Malays, who gloss over his more controversial aspects," said Rashaad Ali, an analyst with S. Rajaratnam School of International Studies (RSIS) in Singapore.

"If the government were to kick him out of the country, it causes them to lose religious credibility in the eyes of the public."