Handke to receive Nobel Prize at ceremony amid controversy 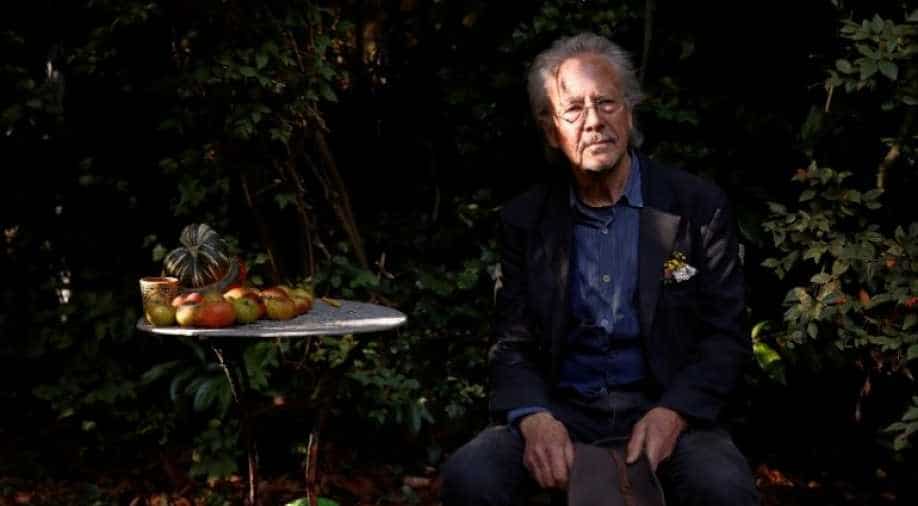 The Swedish Academy's pick for the 2019 prize, announced in October, triggered outrage in the Balkans and beyond because of Handke's support

Nobel literature laureate Peter Handke, who backed Serbia during the wars in ex-Yugoslavia, receives his prize at a gala ceremony Tuesday in Stockholm, where hundreds are expected to protest.

The Swedish Academy's pick for the 2019 prize, announced in October, triggered outrage in the Balkans and beyond because of Handke's support for late Serbian strongman Slobodan Milosevic.

The 77-year-old Austrian author will receive his Nobel Prize from Sweden's King Carl XVI Gustaf at a formal ceremony with this year's other laureates, followed by a gala banquet attended by more than 1,200 special guests.

The Academy honoured Handke "for an influential work that with linguistic ingenuity has explored the periphery and the specificity of human experience."

It called him "one of the most influential writers in Europe after the Second World War."

The choice of Handke came as the Academy struggles to recover from a rape scandal that resulted in the 2018 prize being postponed and awarded this year to Polish author Olga Tokarczuk.

But its pick of Handke has done little to improve its predicament: one Nobel committee member resigned over the choice, one Academy member and representatives of the embassies of Albania, Bosnia, Croatia, Kosovo and Turkey have said they will boycott Tuesday's ceremony, and at least two demonstrations are due to unfold as he receives his prize.

Handke has also not been invited to a traditional event for literature laureates with high school students in a Stockholm suburb, where many students are of foreign background. Tokarczuk will however attend.

At the Nobel banquet, Handke is the laureate seated furthest from the king and queen at the head table, while Tokarczuk will be seated between the king and Prince Daniel, the husband of Crown Princess Victoria.

Neither the Nobel Foundation nor the palace has commented on seating arrangements.

In 1997 Handke was accused of minimising Serb war crimes in his book "A Journey to the Rivers: Justice for Serbia".

He also drew criticism for speaking at the 2006 funeral of Milosevic, who died while on trial for genocide, war crimes and crimes against humanity.

Hundreds of people are expected to attend an anti-Handke protest at the Norrmalmstorg square in central Stockholm, while a second demonstration is planned outside the Stockholm Concert Hall where the prize ceremony will take place.

"He's allowed to write what he wants. The problem is that he is being honoured for his writings," the organiser of one of the protests, Teufika Sabanovic, told AFP.

Born in Srebrenica in 1990, she lost her father and 70 percent of her relatives in the hamlet when some 8,000 Bosnian Muslim men and boys were slaughtered by Bosnian Serb forces in July 1995, which the International Criminal Tribunal for the former Yugoslavia has recognised as a genocide.

In Stockholm on Friday at a press conference, Handke dodged questions on the Balkan wars, telling reporters: "I like literature, not opinions."

But in an interview with German weekly Die Zeit in late November, Handke defended his writings.

"Not one word I have written about Yugoslavia can be denounced, not a single one. It's literature," he said.

Back then, "reporting about Serbia was monotone and one-sided," Handke told Die Zeit.

"He voted against dissolving Yugoslavia in one of the last ballots. His funeral was Yugoslavia's funeral too," Handke said. "Have people forgotten that this state was founded in opposition to Hitler's Reich?"

At the same time, Handke said he "not once bowed down before him -- not internally, not externally."

The head of the Swedish Academy's Nobel committee, Anders Olsson, has insisted Handke is "not a political writer".

Olsson responded to a letter from survivors of war crimes in Bosnia and Herzegovina: "It is obvious that we understand Peter Handke's literary work in very different ways."

Englund headed the Swedish Academy between 2009 and 2015 and reported on the 1990s conflicts in the Balkans for Swedish newspapers.

"I will not participate in Nobel Week this year.... Celebrating Peter Handke's Nobel Prize would be pure hypocrisy on my part," Englund told the daily Dagens Nyheter.

Ironically, in 2014 Handke called for the Nobel Literature Prize to be abolished, saying it conferred a "false canonisation" on the laureate.