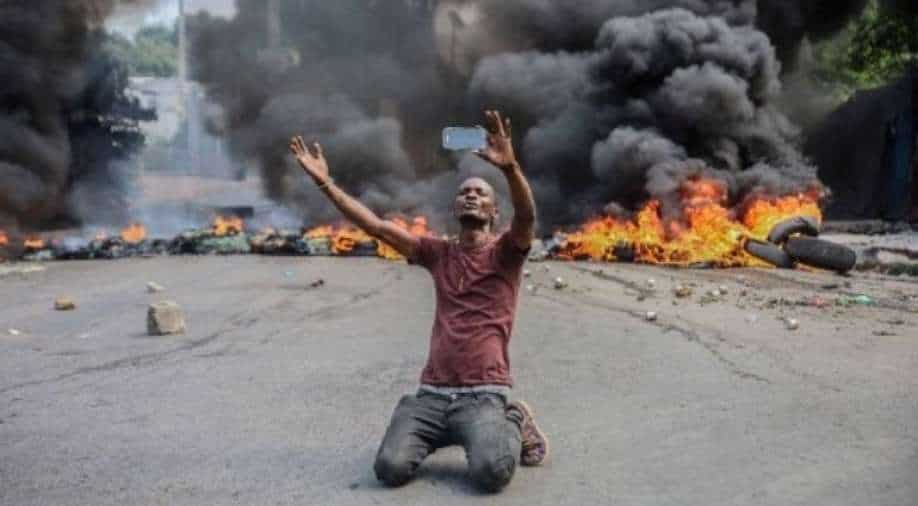 A man films himself in front of tires on fire during a general strike launched by several professional associations and companies to denounce insecurity in Port-au-Prince on October 18, 2021. Photograph:( AFP )

The 17 American and Canadian hostages include five children, the youngest of whom is 8 months old, according to a local official.

An armed gang is seeking a $17 million ransom for a group of American and Canadian missionaries kidnapped in Haiti last week.

According to Haitian Justice Minister Liszt Quitel, the renowned 400 Mawozo gangs is demanding $1 million for each captive.

The Mawozo gang dominates the Ganthier commune in the eastern outskirts of the country's capital, Port-au-Prince, where a party of 16 Americans and one Canadian were abducted on Saturday while on their way to visit an orphanage.

According to the Human Rights Analysis and Research Center, a Haitian nonprofit organisation, at least 628 kidnappings have occurred since January, with 29 of the victims being foreign nationals. The number of occurrences increased by 300 per cent in September compared to July.

The hostages range in age from 8 months to 15 years old, according to Christian Aid Ministries, the charity that sponsors the missionaries' activities in Haiti.

The adults in the group range in age from 18 to 48 years old.

Earlier in the day, White House press secretary Jen Psaki stated that the FBI was part of a concerted US government operation to bring Americans to safety.

According to a source close to the Biden administration, the agents landed in Haiti the day before to help the State Department in securing the missionaries' release.

Meanwhile, US Secretary of State Antony Blinken has said that "We will do everything we can to help resolve the situation and we have in the administration been relentlessly focused on this."

In April, 400 Mawozo abducted and detained 10 people, including two French clergymen, for 20 days in the same location.

In August, the United States issued a red warning for Haiti, advising Americans not to go to the Caribbean country due to rampant abduction, crime, and civil instability.

Kidnappings in Haiti have more than quadrupled in the last year, as gangs become more numerous and strong, leaving an already understaffed police force unable to cope.