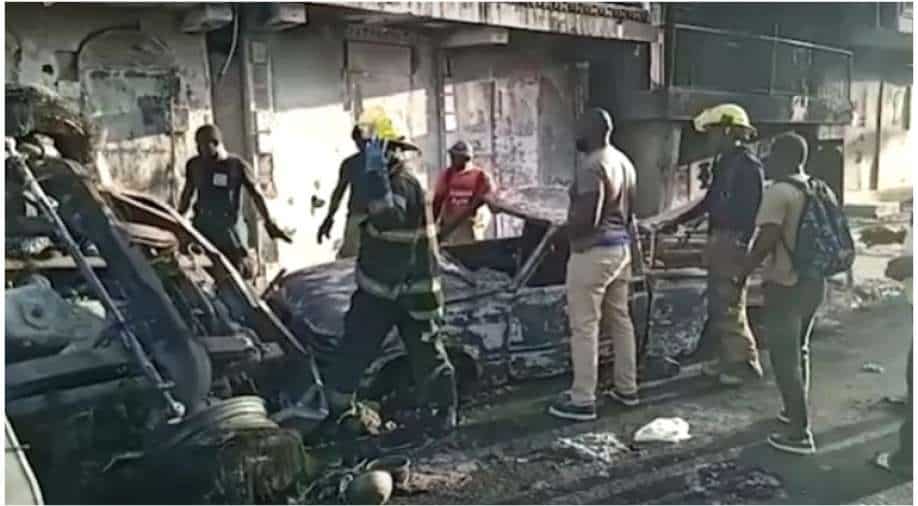 Rescue workers at the scene of the blast in Haiti Photograph:( Reuters )

Local mayor said that 50 to 54.people died immediately after the blast

At least 60 people have lost their lives in a gas tanker explosion in Haitian city of Cap-Haitien. The blast took place on Tuesday morning as per local time.

"I saw on the scene between 50 and 54 people burned alive," Deputy Mayor Patrick Almonor said. "It is impossible to identify them."

He later said that the death toll had increased to 60

Almonor also said "about 20" houses in the area were set ablaze by the explosion.

"We can't yet give details on the number of people inside the houses," he said.

Haiti is in the midst of a severe fuel shortage as gangs have seized gas lines.

Haitian authorities searched for victims of a fuel truck explosion, amid accusations that surrounding villagers attempted to steal fuel from the vehicle before it exploded.

On Tuesday, hundreds of people remained at the blast site, including stunned neighbours searching for loved ones among the ruined homes and workers attempting to disassemble the burned remnants of the truck for scrap metal.

(The video above has not been independently verified by WION.)

Haitian newspaper Le Nouvelliste quoted Patrick Almonor of the Cap-Haitien municipal commission as saying, "Local residents were flocking to the truck when the explosion occurred."

Severe fuel shortages in recent months have left many Haitians desperate to ensure supplies of gasoline.

Earlier, rescue workers loaded bodies covered in white sheets onto trucks to be taken away. The blast damaged nearby houses and shops and destroyed motorbikes and cars.

Prime Minister Ariel Henry visited the Justinien University Hospital, where most of the victims are being treated.