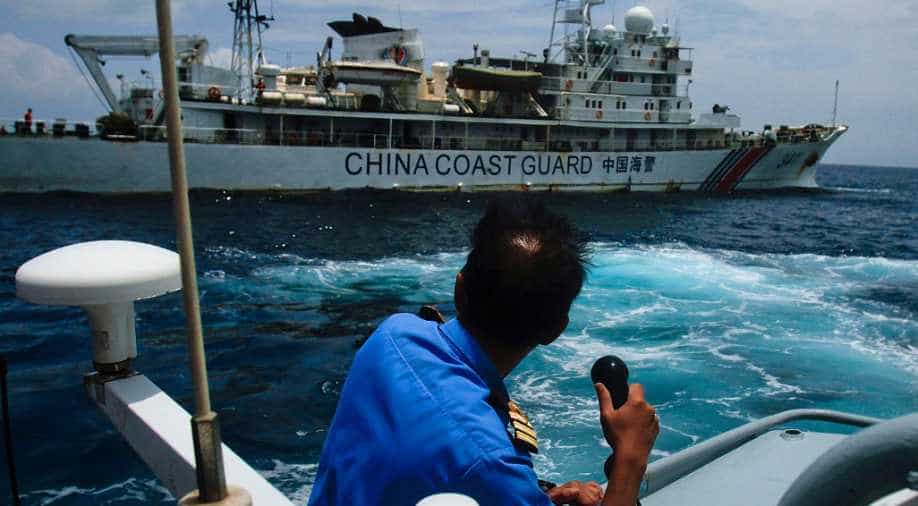 The Philippine government further says that some of the "islands" that Beijing claims as Chinese territory are rocks and not entitled to an exclusive economic zone. Photograph:( Getty )

Follow Us
A little-known international tribunal will early next month step into a bitter dispute over the South China Sea, handing down a ruling which risks further inflaming tensions between Southeast Asian nations and China.

The Permanent Court of Arbitration (PCA) , the world's oldest international tribunal for the peaceful resolution of disputes between nations, said on Wednesday that it will rule on July 12 in the highly-watched case brought by the Philippines challenging China's claims to much of the strategic waterway.

Manila lodged the suit against Beijing in early 2013, saying that after 17 years of negotiations it had exhausted all political and diplomatic avenues to settle the dispute.

But Beijing, angered by Manila's move, has refused to participate in any hearings, and said it will not comply with any decisions by the tribunal based in The Hague.

The written decision will first be emailed to the parties, and then released to the press and uploaded onto the PCA's website.

Tensions in the South China Sea have also alarmed other nations, notably the United States, which has key defence treaties with many allies in the region, and in a show of strength has sent warships close to some of the Chinese claimed reefs.

Spanning more than three years, two hearings and nearly 4,000 pages of evidence, the arbitration case in The Hague is extremely complex, and has already drawn anger in Beijing.

In essence, the world economic and military power claims most of the sea, even waters approaching neighbouring countries, based on a vaguely defined "nine-dash" Chinese map dating back to the 1940s.

The Philippines disputes this and while it has stressed that it is not asking the court to rule on sovereignty or to delimit any boundaries it has asked the tribunal to rule on other key points.

Basing its arguments on the UN Convention on the Law of the Sea, Manila contends that the "nine-dash" line has no basis under international law and Beijing has no "historic" claim to the ocean.

Manila has further argued that Beijing violated the UN convention by preventing it from exercising its fishing and exploration rights and that Chinese fishing boats have irreversibly damaged coral reefs.

The Philippine government further says that some of the "islands" that Beijing claims as Chinese territory are rocks and not entitled to an exclusive economic zone.

"China will be obliged under international law to comply with the decision, and with all its obligations under the law of the sea as clarified by the arbitral tribunal.

But being bound by the decision says nothing about means of enforcing it," Joris Larik, a senior researcher with the think-tank The Hague Institute for Global Justice, told AFP.

He said any ruling "in favour of the Philippines on any of the points it raises would be a blow to China's expansive nine dash line claims."
But Larik acknowledged that "enforcement is the Achilles Heel of public international law.

The PCA is an extreme example of that. "Tensions have been growing for years in the South China Sea, as Beijing has sought to expand its presence in what is a main maritime link between the Pacific and Indian oceans.

Its shipping lanes connect East Asia with Europe and the Middle East, and over $5 trillion (4.5 trillion euros) in ship-borne trade passes through the sea annually.

Major unexploited oil and gas deposits are also believed to lie under the seabed.

China has conducted massive dredging and artificial island-building activities in the Spratlys, dwarfing the scale of reclamation work of other claimants.

In April, the United States launched joint South China Sea patrols with its key ally Manila and has consistently called for a diplomatic solution to the standoff.

Vietnam, Malaysia, Brunei and Taiwan also have overlapping claims to the strategic waterway.

And last week Indonesian President Joko Widodo visited the remote Indonesian Natuna islands on a warship in an apparent show of force after clashes with Chinese vessels.