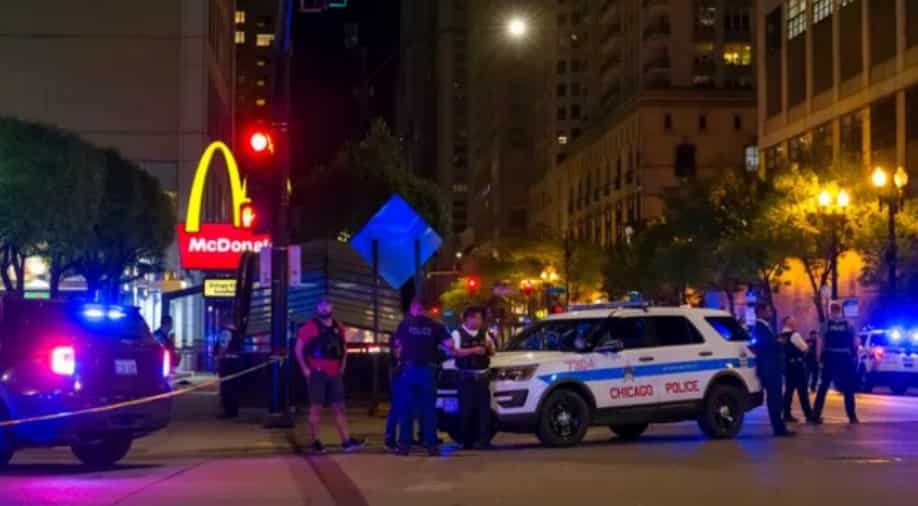 In this picture, Chicago Police can be seen outside a McDonald's near the city's Magnificent Mile shopping section Photograph:( Reuters )

In another incident of gun violence, at least two people have been killed 10 were wounded in a fatal shooting that escalated from a fight outside a fast-food restaurant and spilled onto a nearby train line.

According to Chicago police spokesperson Tom Ahern, "Last night about 11 o'clock, some around there, we heard gun shots in rapid succession, about 12 of them."

The Chicago Sun-Times reported that those who have been wounded were taken to local hospitals in "serious to critical condition."

It comes after a racist mass shooting at a supermarket in New York state in which 10 African American people were killed while a Chinese immigrant padlocked a church and opened fire on its Taiwanese American congregation in an apparent hate attack.

A deadly shooting had taken place in Chicago's Millennium Park last weekend in which teenagers were involved after which Lightfoot had banned unaccompanied minors from the park after 6 pm Thursday through Sunday.

Chicago Police superintendent David Brown said that an officer had shot a 13-year-old boy who was suspected of having taken part in a carjacking and the incident is being investigated by the city's Civilian Office of Police Accountability (COPA).

We are continuously working with our City and community partners to make Chicago a safer place to live. Following a recent major drug trafficking investigation in the West Garfield Park neighborhood, it’s important we now bring in resources to sustain public safety in the area. https://t.co/bCmMST661X

Since the beginning of the coronavirus pandemic in 2020, several cities in the United States have witnessed a surge of deadly violence.

The proliferation of so-called "ghost guns", which can be assembled at home and are virtually impossible to trace, is one of the major reasons behind the rise in gun crime other than the social dislocation caused by the pandemic according to experts.

Keith Taylor, a gun violence expert at John Jay College of Criminal Justice in New York, told AFP "Unless the United States really works on getting a consistent process in place to regulate, license, and monitor gun ownership, you're going to continue to have these types of incidents and they will increase."