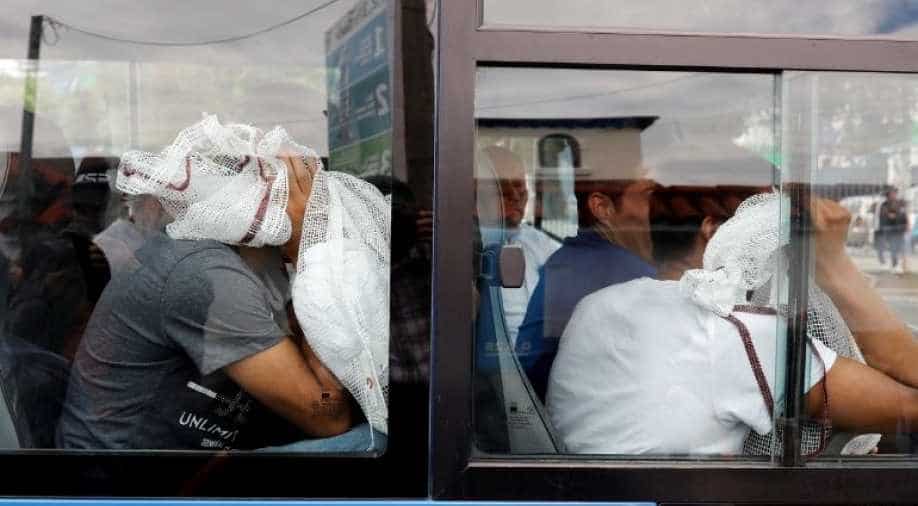 Guatemalan migrants cover their faces with their belongings while sitting on a bus provided by the Guatemalan immigration minister upon their arrival from the United States, in Guatemala City. Photograph:(Reuters)
Follow Us

Guatemalan human rights groups also criticized the deal, which did, however, receive backing from business associations.

The two contenders to be Guatemala's next president questioned on Saturday the validity of a deal struck by the country's government with the United States that aims to curb the flow of migrants north from Central America.

US President Donald Trump on Friday said he would drop the threat of economic sanctions against Guatemala after its government agreed to implement new measures aimed at bringing down US asylum claims from migrants fleeing Honduras and El Salvador.

US officials described the deal as a safe third-country agreement, which would make Guatemala a buffer zone for migrants from its Central American neighbours, although the Guatemalan government did not characterize the accord as such.

Guatemala's Constitutional Court had already ruled a safe third-country agreement would need prior approval from the Guatemalan Congress, which is on a summer recess.

That prompted the two candidates contesting a second-round run-off on Aug. 11 to succeed Guatemalan President Jimmy Morales to cast doubt on the deal which Interior Minister Enrique Degenhart signed for Guatemala in Washington.

"There needs to be a thorough analysis of whether the minister had the power to sign an agreement with these international characteristics, and in any case, the agreement has to go to Congress, whoever signed it," said Sandra Torres, the centre-left candidate who led the first round of voting in June.

Torres, who was speaking at a rally in Chichicastenango, north of the capital, ordered lawmakers from her UNE party to summon both Degenhart and Foreign Minister Sandra Jovel to give testimony before Congress on how the deal was brokered.

Her rival for the presidency, conservative Alejandro Giammattei, called the accord "bad news for Guatemala."

"This has opened a rocky road for President Morales because according to the Constitutional Court ruling, that agreement has to pass through Congress," Giammattei told CNN.

Guatemalan human rights groups also criticized the deal, which did, however, receive backing from business associations.

Guatemala's next president will take office in January.