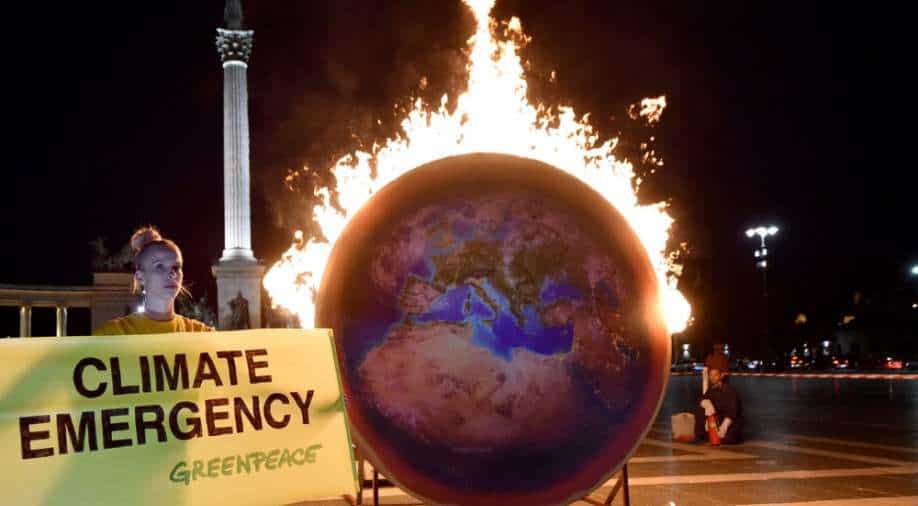 The Earth on fire is seen during a protest in Budapest on Sept. 4, 2019 Photograph:( AFP )

A report released by the UN’s World Meteorological Organization said these extreme climate changes caused hundreds of billions of dollars in economic losses.

“It wreaked a heavy toll on human lives and well-being and triggered shocks for food and water security and displacement that have accentuated in 2022,” the WMO said in its report State of the Global Climate in 2021.

“This is yet another clear sign that human activities are causing planetary-scale changes on land, in the ocean, and in the atmosphere, with harmful and long-lasting ramifications for sustainable development and ecosystems," it said.

The UN agency said that in 2021, the levels of climate-warming carbon dioxide and methane in the atmosphere surpassed previous records.

The report also confirmed that the past seven years were the top seven hottest years on record.

The report confirmed that put of those seven warm years on record, the year 2021 was "only" because of a La Nina event (ocean phenomenon in the Pacifics) at the start and end of the year.

"This had a temporary cooling effect but did not reverse the overall trend of rising temperatures. The average global temperature in 2021 was about 1.11 (plus/minus 0.13) degrees Celsius above the pre-industrial level.

It is just a matter of time before we see another warmest year on record," said WMO Secretary-General Professor Petteri Taalas.