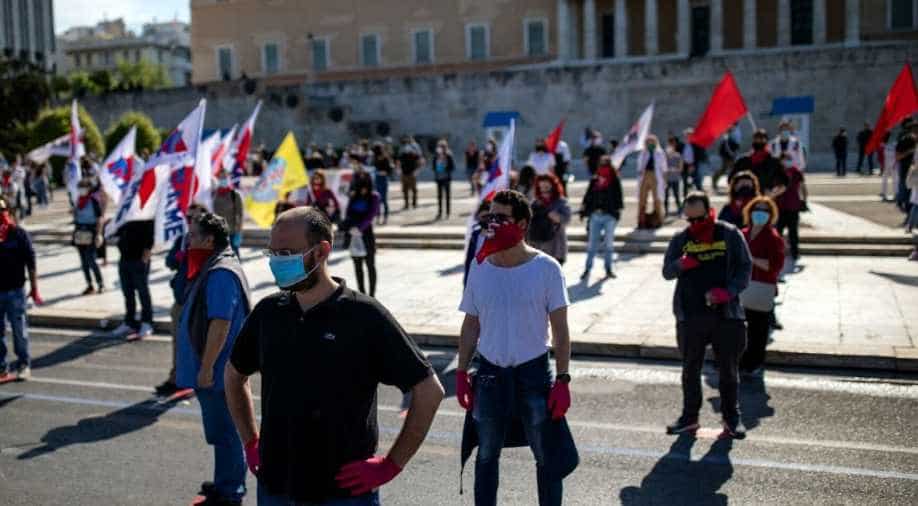 As Greek authorities struggle to contain a second wave of the virus, some of the fiercest criticism of the church is coming from within its own ranks

ATHENS — The coronavirus has dealt a double blow to the powerful Greek Orthodox Church, with the disease spreading through its ranks while the clergy fends off criticism that it has been stoking the pandemic.

The church’s leader, Archbishop Ieronymos, declared from the outset of the pandemic in the spring that he was committed to supporting the conservative government’s public health campaign to halt the spread of the virus. On Nov. 30, the 82-year-old archbishop left an Athens hospital after 12 days of treatment for the virus, urging Greeks to “restrict yourselves, discipline yourselves, follow the rules.”

But defiance by Orthodox hard-liners and the church’s unflinching commitment to the tradition of Holy Communion, where worshippers consume sacramental bread soaked in wine from a common spoon, appears to have undercut those good intentions. Several clergy members have even gone as far as insisting that faith in the communion sacrament can shield people from the virus.

As Greek authorities struggle to contain a second wave of the virus, some of the fiercest criticism of the church is coming from within its own ranks. One bishop, Anthimos of Alexandroupolis, condemned those who, with “criminal sermons,” have urged Greeks to ignore public health restrictions.

“We believed we were supermen. We hid the fact that we’d been infected by the virus and were led to the grave,” he wrote in an article posted online last month. “Pious Egotism Kills!” he added.

Nasos Iliopoulos, spokesman for the leftist opposition party Syriza, said, “The fact that these are the words of a bishop make it clear that the church’s response to the pandemic has been questionable.”

“Let’s not forget the existence of a conservative/religious public that often appears to deny not only the measures but the very existence of the pandemic,” Iliopoulos added, saying the state must make clear that observing the coronavirus restrictions is an obligation for all.

It is not clear to what extent places of worship have contributed to the spread of the virus in a country where 8 in 10 people say religion is an important part of their lives.

Conservative government officials have chiefly blamed overcrowding in bars and restaurants and seem loath to point the finger at the church, even though the disease has clearly spread through the ranks of the clergy in recent weeks — particularly afflicting older members who are most vulnerable to the virus.

At least six of the church’s 82 bishops in Greece have caught the virus, including 62-year-old Bishop Ioannis of Lagadas in northern Greece, who died from it Nov. 15. But the actual number of infected clerics is not known, as some have not made their illnesses public, calling it “a personal issue,” church officials said.

“Some clergy, hierarchs included, seem to act as if they believe themselves to be immune to the disease,” said George Demacopoulos, a co-director of the Orthodox Christian Studies Center at Fordham University. “We are seeing the tragic results of this sort of thinking.”

Although Greece initially fared relatively well in coping with the pandemic, the second wave has proved tougher to curb. As of Friday, the country had 113,185 confirmed cases and 2,804 deaths, with most of the deaths recorded over the past month.

Other Orthodox churches in Europe have also been struck by the virus.

The Orthodox patriarch of Serbia, Irinej, 90, and the patriarch of Montenegro, Amfilohije, 82, both died from it in recent weeks. The Archbishop of Albania, Anastasios, a 91-year-old ethnic Greek, was flown in for treatment at the same Athens hospital that treated Archbishop Ieronymos last month.

Irinej had officiated at Amfilohije’s funeral in Montenegro’s capital, Podgorica, on Nov. 1. The funeral drew thousands of mourners, many of them kissing the body of the deceased cleric. Several clerics contracted the virus after that gathering.

Similar “superspreader” events appear to have fueled the transmission of the virus through the ranks of the Greek clergy, notably a dinner for the Holy Synod, the church’s governing body, in Athens and a ceremony for the patron saint of Thessaloniki in northern Greece.

Bishop Ioannis of Lagadas had been in a throng of clerics and worshippers at the saint day celebrations in late October, several weeks before his death. He was among those who claimed that the virus does not spread through Holy Communion.

A vigil for the eradication of the coronavirus at Mount Athos, a monastic community in northern Greece, also drew scores of people in a crowd last month. It followed an outbreak there in September, although monastery officials said all participants had been tested for COVID-19.

A Greek court recently cleared a bishop, Nektarios of Corfu, of violating COVID-19 health restrictions even though he urged worshippers to defy the spring lockdown and attend church.

The Holy Synod said that it was complying with health measures, including the enforcement of social distancing and the mandatory use of face masks in churches. But at the same time, it condemned a “neurotic” focus by critics on Holy Communion.

“If you don’t believe and see it as wine and bread, you are not protected,” said Giorgos Vasileiou, head of the synod’s press office. “I see it as the body of Christ, so I am.”

Several conservative lawmakers say they continue to participate in the sacrament of communion, and a government minister was recently photographed doing so.

Opinion polls, however, indicate that 7 in 10 Greeks believe that communion spreads the virus, and a new survey found that 7 in 10 described the church’s response to the pandemic as irresponsible.

Greece’s National Public Health Organization, Eody, breaks down infections by region, gender and age and conducts targeted inspections in harder-hit regions but does not systematically track the sources of outbreaks. As such, it does not release figures linking cases to church attendance, public transportation or bars among other sources.

Epidemiologists in Greece have differing opinions on the question of Holy Communion.

Eleni Yiamarellou, a government health adviser, has publicly declared that the practice poses no health risk to believers.

Another prominent epidemiologist, Athina Linou, has called on the Greek Orthodox Church to reconsider the tradition of using a single spoon, as has been done in Romania, Russia, Ukraine and the United States.

Although the messages are mixed, religious experts say the church cannot speak out against a crucial tenet of Orthodox religious practice.

“It could not show flexibility on the issue of Holy Communion,” said Apostolos Nikolaidis, professor of the sociology of religion at the University of Athens. “It would nullify itself, its nature, its very existence.”