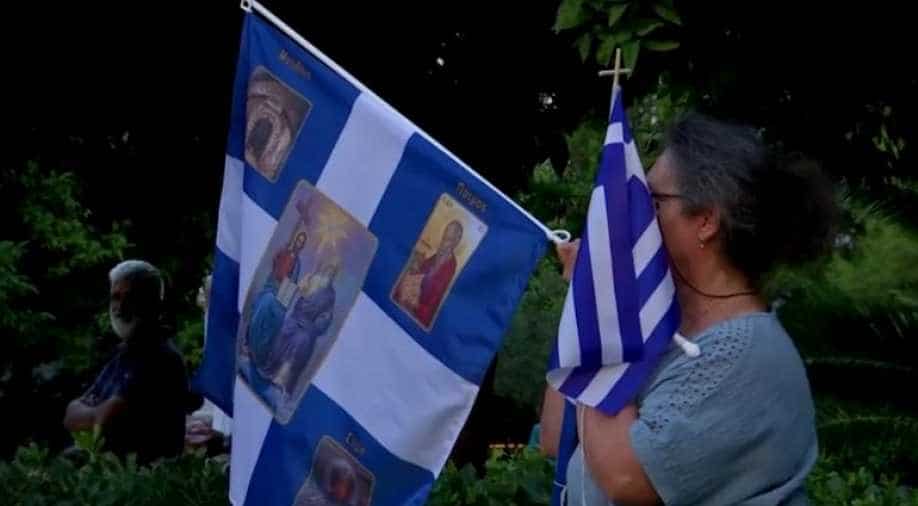 Greek criticism of the conversion has been scathing, underscoring often tense relations between Greece and Turkey.

Church bells across Greece tolled mourning on Friday as the first Islamic prayers in nine decades were held at Hagia Sophia in Turkey, marking the monument's conversion into a mosque.

At midday, churches around the country flew their flags at half-mast in protest against what the head of the Church of Greece, Archbishop Ieronymos, called an "unholy act of defiling" the former cathedral.

Later on Friday, the archbishop held a special service at the Athens Metropolis, during which he chanted the Akathist Hymn in honour of the Virgin Mary. According to Greek tradition, the same service was held in Hagia Sophia on the eve of the Byzantine Empire capital's fall to the Ottomans.

Hagia Sophia is "a symbol of our faith and a universal monument of culture," Ieronymos said.

Turkey's President Tayyip Erdogan joined huge crowds in Istanbul for prayers at Hagia Sophia, sealing his ambition to restore Muslim worship at the ancient site which most Greeks consider as central to their Orthodox Christian religion.

Greek criticism of the conversion has been scathing, underscoring often tense relations between Greece and Turkey.

In a message marking Greece's 46th anniversary of the restoration of democracy on Friday, Greek Prime Minister Kyriakos Mitsotakis called Turkey a 'troublemaker', and the Hagia Sophia conversion an 'affront to civilisation of the 21st century'.

"What is unfolding in Constantinople today is not a demonstration of strength, but proof of weakness," Mitsotakis said, referring to Istanbul by the old name of the city used by Greeks.

Nevertheless, the move would not "diminish the radiance of a global heritage monument", he said.

"Especially to us Orthodox Christians, Hagia Sophia today is in our hearts more than ever. It is where our heart beats," Mitsotakis said.

Greece and Turkey disagree on a range of issues from airspace to maritime zones and ethnically split Cyprus. Tensions upped a notch this week with verbal jousting over the delimitation of their continental shelves in the eastern Mediterranean, an area thought to be rich in natural resources.

From Crete to small Greek islands lying just off the Turkish coast, church bells tolled and in some areas flags flew at half mast.

"We thought someone had died but we were told it was for Hagia Sophia. It’s very sad, very sad," said Katerina, 40, a shop owner on the island of Astypalea.