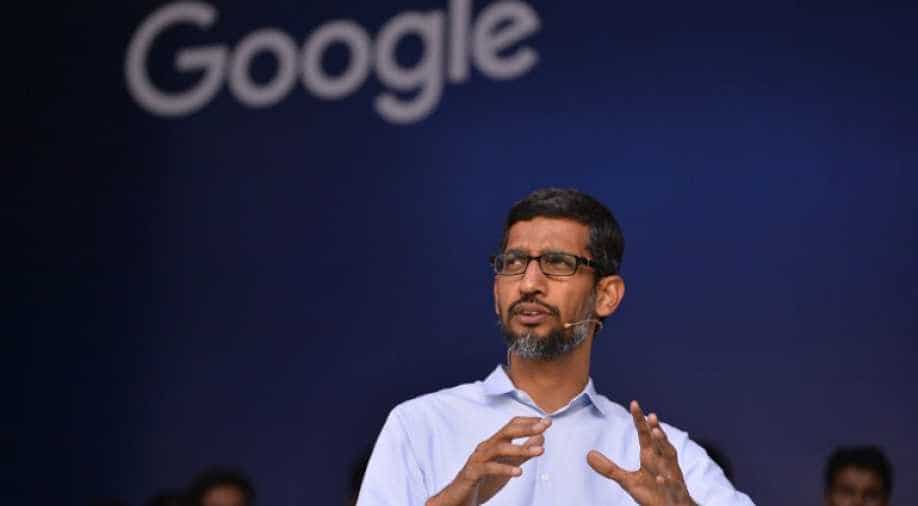 Google's CEO Sundar Pichai in an email to staff said the US ban on foreign nationals from seven Muslim-majority countries will hit at least 187 Google employees. Photograph:( AFP )

Google's India-born CEO Sundar Pichai has criticised President Donald Trump's controversial immigration order against people from seven Muslim-majority countries, saying it will create "barriers" to bringing great talent to the US, as the Internet search giant ordered its travelling staff to return to America.

Pichai in an email to staff said the US ban on foreign nationals from seven Muslim-majority countries will hit at least 187 Google employees.

"We're upset about the impact of this order and any proposals that could impose restrictions on Googlers and their families, or that could create barriers to bringing great talent to the US," the Wall Street Journal quoted Pichai as saying in the email.

"It is painful to see the personal cost of this executive order on our colleagues," he said.

Google has recalled around 100 of its affected staff from overseas, the BBC reported.

President Trump ordered "extreme vetting" of people entering the US from seven Muslim-majority countries and banned the entry of Syrian refugees until further notice, as part of new measures to "keep radical Islamic terrorists" out of America. The countries impacted are Iran, Iraq, Syria, Sudan, Libya, Yemen and Somalia.

The controversial move, signed a week after he was sworn in as the president, fulfills the vow Trump made on the campaign trail to limit Muslim immigration to the US.

In his message to employees, 44-year-old Pichai, who grew up in India, suggested that at least 187 employees hailed from countries included in the ban.

"Our first order of business is to help Googlers who are affected," he said. "If you're abroad and need help please reach out to our global security team."  "We wouldn't wish this fear and uncertainty on anyone and especially not our fellow Googlers," Pichai wrote: "In times of uncertainty, our values remain the best guide."

Immigrants make up much of the workforce in Silicon Valley, including many executive roles, and the tech industry has long advocated for more open immigration laws in the US, saying they need more skilled foreigners to fill technical jobs. The new restrictions will have a major impact on American technology companies that hire skilled staff from all over the world on special H1-B visas, mostly used by Indian IT firms.

"There have already been reports of green card holders, who are allowed to work in the US, being prevented from getting on flights. However, green cards are not specifically mentioned in the executive order," the Wall Street Journal said.

Microsoft has also warned its shareholders that curbs on immigration could have a material impact on its business.

Facebook CEO Mark Zuckerberg has also criticised Trump's decision to severely limit immigrants and refugees from certain Muslim-majority countries, saying America is a nation of immigrants and should be proud of it.

"These issues are personal for me even beyond my family. A few years ago, I taught a class at a local middle school where some of my best students were undocumented. They are our future too. We are a nation of immigrants, and we all benefit when the best and brightest from around the world can live, work and contribute here. I hope we find the courage and compassion to bring people together and make this world a better place for everyone," he said.

"Expanding the focus of law enforcement beyond people who are real threats would make all Americans less safe by diverting resources, while millions of undocumented folks who don't pose a threat will live in fear of deportation," he said.

Zuckerberg also prodded Trump to stand by earlier statements regarding Deferred Action for Childhood Arrivals (Daca) and H1-B visas, which are of particular concern to tech companies that use the visas to hire talent from overseas.