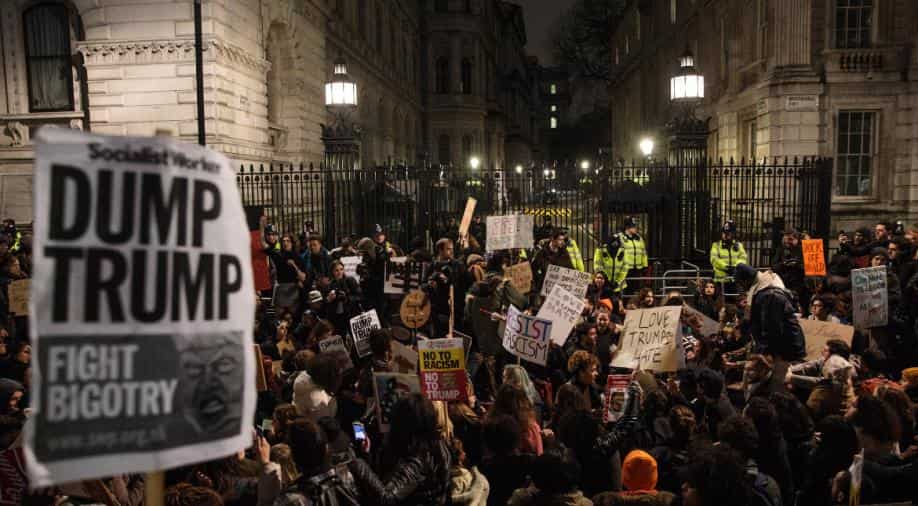 The technology sector has condemned the move and announced financial support for organisations that back immigrants, such as the American Civil Liberties Union. Photograph:( Getty )

Thousands of Google employees on Monday rallied outside its Mountain View headquarters, and in at least eight different cities around the world, to stage a mass walkout in protest against Donald Trump's ban on immigrants from Muslim countries.

Reuters reported that the unofficial rally was initiated by a Google engineer. Several people including Google's co-founder Sergey Bin, who is an immigrant from Russia, spoke at the demonstration.

"This is something, there are some values, which are really near and dear to your heart," Google CEO Sundar Pichai addressed the crowd. "It’s foundational and it’s something you should never compromise on. The thing we’ve been debating for the past three days is one of them."

The Wall Street Journal reported that an email sent by Pichai on Saturday said that the immigration status of 187 Google employees was affected by the order.

Trump signed an executive order last week banning immigration from seven Muslim-majority countries, prompting widespread outrage and protests from across the world. The acting US attorney general said she wasn't convinced the order was "lawful", and said Justice Department lawyers don't need to defend the ban. Trump's White House called this "betrayal", called her "weak on borders" and fired her.

While Trump accused the media of misinforming the public by labelling the immigration ban against seven predominantly Muslim countries a "Muslim ban", his adviser Rudy Giuliani appeared on Fox News after the order was given, and said that Trump himself approached him, and asked how to make a "Muslim ban" legal.

A group of technology companies have planned to file an amicus brief to support the lawsuit challenging US President Donald Trump's immigration ban. Reuters reported that the meeting to discuss the brief was called by software development toolmaker GitHub.

Alphabet Inc's Google, Airbnb Inc and Netflix Inc are among the companies invited, Reuters reported a person familiar with the situation as saying.

The technology sector has condemned the move and announced financial support for organisations that back immigrants, such as the American Civil Liberties Union.

Amazon.com Inc and Expedia Inc on Monday filed declarations of their support of a lawsuit filed by the Washington state attorney general. They said Trump's order adversely impacts their business.

A separate lawsuit was filed against Trump's executive order by the Council on American-Islamic Relations on Monday.

Global crowdfunding company Kickstarter and cloud communications platform Twilio both confirmed their involvement in filing the brief. Etsy could not confirm if it would move forward with the group.

An amicus brief provides the court with new information or a different perspective by amicus curiae (friend of the court) who is not associated with any party but has a strong interest in the matter.