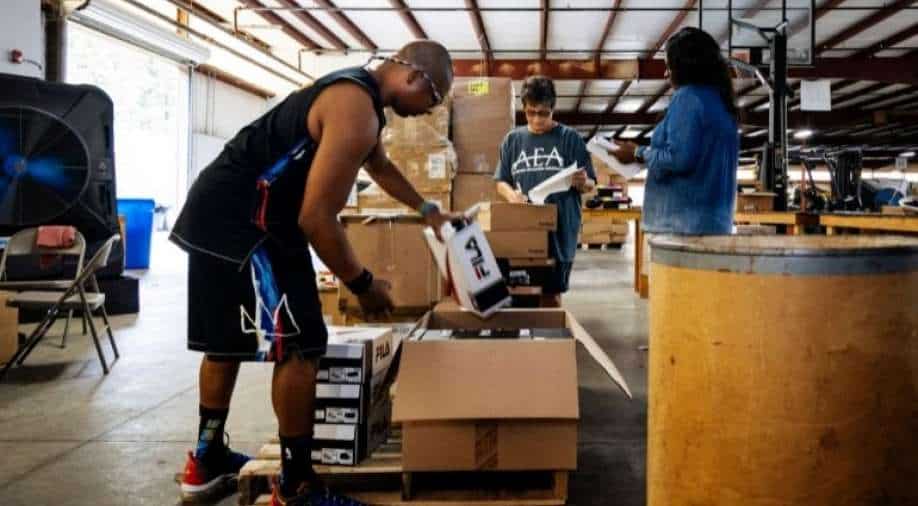 Donated new shoes are unpacked and cataloged in Wadley, Ala., for the 4EveryKid initiative, which provides new shoes for homeless schoolchildren, on Sept. 17, 2021. (Audra Melton/The New York Times) Photograph:( The New York Times )

Already this year, Haiti has suffered a calamitous earthquake and a presidential assassination, to say nothing of a lethal pandemic combined with the strains of everyday life in a country where people can take little for granted. The Great Supply Chain Disruption is now adding to the strain.

In the face of bewildering and enduring shortages of goods throughout the global economy, even aid organizations like food banks and clothing distributors are caught in the chaos. Many are struggling to secure what they need, amplifying scarcity in vulnerable communities.

In Haiti, one of the world’s poorest countries, an effort to increase household incomes is confronting a new problem stemming from the global supply chain upheaval — a shortage of shoes.

The Haitian American Caucus, a nonprofit organization, imports donated, used shoes from the United States and sells them at low cost to women who hawk them on sidewalks and in markets, earning crucial cash for their families.

The caucus is distributing almost 100,000 pairs of shoes a month, but it could manage four times as many if only more inventory arrived, said its executive director, Samuel Darguin.

“That pair of shoes represents so much more,” he said. “It represents a mother being able to send a kid to school, being able to afford health care and feed her family maybe two meals a day instead of one.”

Two years into a relentless pandemic, the world economy remains awash in logistical difficulties. Factories in Asia are struggling to satisfy demand for their products. Ports are short of shipping containers and healthy hands to unload them. Trucks are idled for lack of drivers, with warehouses overwhelmed by goods.

That upheaval may seem far removed from Haiti, but it helps explain why Darguin’s program is waiting for more shoes.

Already this year, Haiti has suffered a calamitous earthquake and a presidential assassination, to say nothing of a lethal pandemic combined with the strains of everyday life in a country where people can take little for granted. The Great Supply Chain Disruption is now adding to the strain.

Darguin’s supplier of shoes, a nonprofit based in Nashville, Tennessee, called Soles4Souls, is itself suffering shortages of footwear as manufacturers that donate inventory keep more of it in a frantic bid to satisfy retail customers.

The upending of the global supply chain continues to be a grave problem for multinational brands that sell wares to customers and shoppers who cannot secure what they want — whether it be lumber, new cars or exercise bikes. But product shortages and shipping impediments have proved so persistent and pervasive that they are also afflicting organizations that rely on donated goods. Their troubles underscore how the supply chain disorder is rippling out across vast distances, reaching a pipeline of aid that is ordinarily invisible to the wider world.

Enormous retailers like Target, Nike and Home Depot — all of which have acknowledged problems stocking shelves — can afford to stockpile goods. And they can pay extra to ensure that their products gain passage on overbooked cargo ships, even as fares on routes from China to the West Coast of the United States have increased tenfold over the course of the pandemic.

But nonprofit organizations lack such means. They are like economy-class passengers stuck at an airport after a blizzard, watching the first-class customers grab all the available seats out.

In Jacksonville, Florida, Teri Ketchum, chief executive of Presbyterian Social Ministries, collects donated children’s clothing and distributes it to community agencies in her region and as far away as the Philippines.

Last year, with people stuck at home in pandemic lockdowns, many emptied out basements and closets, creating a surge of donated clothing. This year, as schools have reopened, the demand for children’s clothing has exhausted Ketchum’s supply.

“At least once a week, some local partner calls to say, ‘Have you got any kids’ clothes,’ and we have to say, ‘No, we just don’t have it,’ ” she said.

The shortages are coinciding with the ending of many government relief programs for people whose livelihoods have been hurt by the pandemic — like emergency unemployment benefits and eviction moratoriums protecting those behind on their rent.

“If people were struggling before, they are just at rock bottom right now,” Ketchum said. “Now, it’s, ‘Do I buy food, or do I buy clothes?’ Clothes is the last thing that a parent who is already stretched is going to do.”

Second Harvest Food Bank of Middle Tennessee oversees a food-distribution operation serving about 400,000 people in 46 counties, relying on donations from grocery stores in the area. Second Harvest also distributes purchased food at low cost to sister organizations across the country.

During the first waves of the pandemic, as families sequestered at home cooked more, demand for groceries soared, depleting the shelves of local supermarkets and resulting in fewer donations. That prompted Second Harvest to buy more groceries.

But given the shortage of supplies, the organization has had to widen its sights significantly, bringing in pasta and macaroni and cheese from Thailand and India.

In recent months, Second Harvest has shifted back to domestic suppliers, but it has still encountered delays on its orders as food-processing companies are slowed by difficulties in importing ingredients.

Unable to find low-sodium green beans — a popular item — Second Harvest has instead distributed the ordinary variety, while counseling recipients who must watch their salt intake to rinse the beans before cooking. When can shortages made it impossible to buy spaghetti sauce, Second Harvest found a restaurant supplier who had extra volumes of bulk sauce packaged in plastic bags.

“We have a trailerload of pasta that has to go to Denver, and it’s two weeks late,” said Nancy Keil, the organization’s president and chief executive. “It's like a moving target. You don’t know where you’re going to be short next.”

In Nashville, Soles4Souls — the organization that supplies Darguin’s program in Haiti — has been forced to scale back plans to distribute shoes to homeless children in schools across the United States.

Known as 4EveryKid, the program aimed to distribute 75,000 pairs of shoes to homeless students this year, but it has lowered the target to 50,000.

“Some kids actually don’t come to school if they don’t have a pair of shoes to wear, especially when the weather gets really bad,” said Cathy Klein, homeless coordinator for the Milwaukee Public Schools, which expects to receive 1,000 pairs of shoes this year via the 4EveryKid program.

Soles4Souls depends on contributions of new shoes from major footwear companies. As the companies have struggled to satisfy retail orders, they have sharply curtailed charitable contributions.

“Typically, we get product that’s excess,” said Rod Arnold, Soles4Souls’ chief marketing officer. “Everyone is just saying, ‘We are selling everything we can get our hands on.’ ”

Early this year, a shortage of shipping containers in Chinese ports slowed the loading of factory goods while increasing shipping costs. Then came the closing of the Suez Canal — a major corridor linking Asia to Europe. Since May, Chinese authorities have temporarily shut operations at two major container ports.

In recent weeks, Vietnam — a major manufacturer of footwear — has imposed a strict lockdown to choke off the spread of the coronavirus. That has stopped production while delaying the shipment of finished shoes.

“What we’re hearing from our partners and donors is, ‘We want to help you. We believe in what you do. There’s just not the product. We don’t have it,' " said Buddy Teaster, chief executive of Soles4Souls. “They have got other stuff that they are prioritizing.”

There’s also the soaring cost of trucking, which is impeding shipments of used shoes like those destined for Haiti.

Before the pandemic, moving a truckload of shoes from California to the Soles4Souls main warehouse in Alabama cost $2,500 and took perhaps four days, Teaster said. Now, it costs as much as $7,000 and can require two weeks.

The same dynamic on the ocean has sabotaged the workings of Soles4Souls’ partners around the globe.

The organization has often served as a matchmaker, brokering shipments of mislabeled batches of shoes and clothing from factories in Asia to thrift stores in Transnistria, a breakaway state in Moldova. The thrift stores provide careers to young people who grew up in orphanages.

But as the price of shipping a container from Vietnam to Ukraine has swelled fivefold, the thrift stores have had to sharply curtail their purchases.

“The nonprofit is quite literally at the end of the line in terms of what we can afford,” said Mike Shirey, Soles4Souls chief operating officer. “People aren’t bringing in the quantities of goods that they used to.”