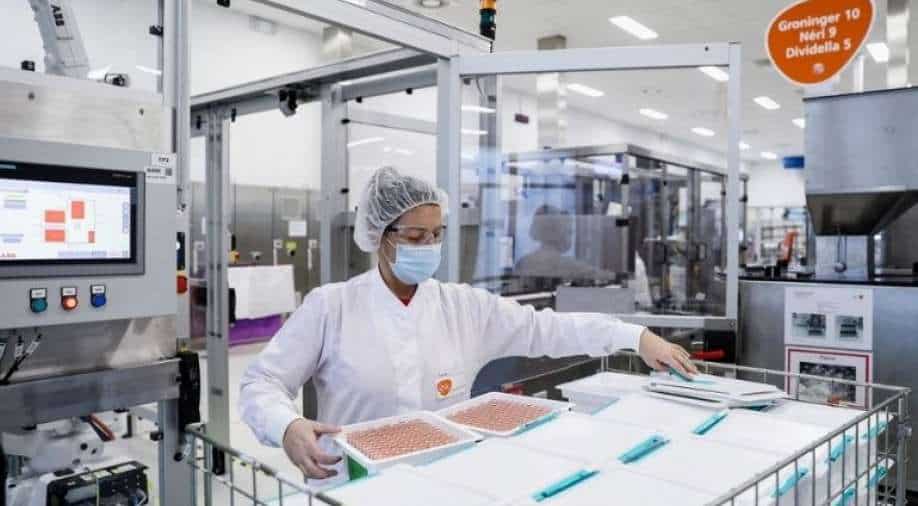 A GSK employee is at work at the factory of British pharmaceutical company GlaxoSmithKline (GSK) in Wavre Photograph:( AFP )

GlaxoSmithKline (GSK) has said that its coronavirus drug called sotrovimab is effective against the Omicron variant.

The British pharmaceutical industry company had conducted a trial against key mutations of the new Omicron SARS-CoV-2 variant.

According to the Medicines and Healthcare products Regulatory Agency (MHRA), ''The antibody treatment was found to be safe and effective at reducing the risk of hospitalisation and death in people with mild to moderate COVID-19 infection who are at an increased risk of developing severe disease.''

"To date, sotrovimab has demonstrated ongoing activity against all tested variants of concern and interest defined by the World Health Organization (WHO)," it added.

It believes a single dose of the drug was found to reduce the risk of hospitalisation and death by 79 percent in high-risk adults with symptomatic COVID-19 infection.

The antibody is designed to latch on to the spike protein on the surface of the coronavirus, but Omicron has been found to have an unusually high amount of mutations on that protein.

“Sotrovimab was deliberately designed with a mutating virus in mind," said Vir Chief Executive George Scangos, adding that the drug was targeting a region of the spike protein that was highly unlikely to mutate.

The UK's drug regulator has granted approval to the antibody-based COVID-19 treatment.

Sotrovimab is based on monoclonal antibodies, which are lab-made versions of the natural antibodies the body generates to fight off an infection.