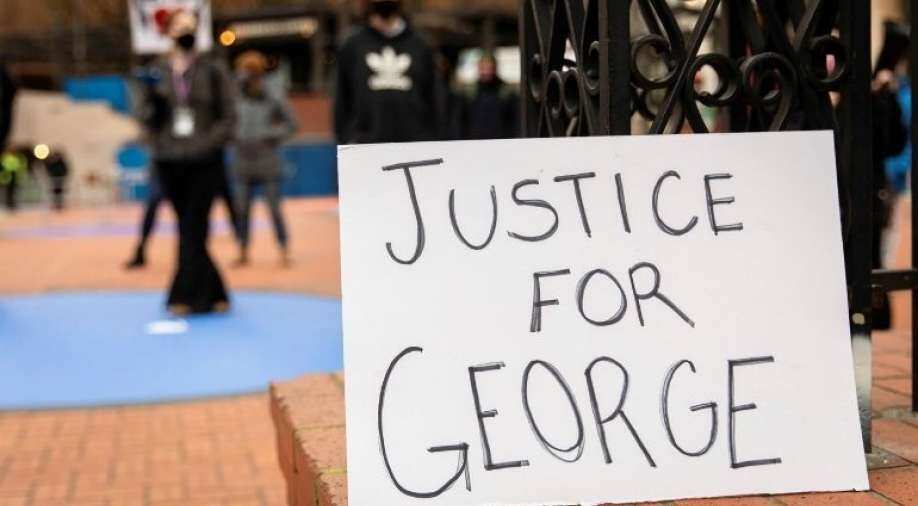 A "justice for George" sign is displayed while people demonstrate as jury selection begins in Minneapolis for the trial of Derek Chauvin, the former policeman accused of killing George Floyd, a Black man, during a march in Portland, Oregon, US March 8, 20 Photograph:( Reuters )

The case of Floyd, who died in police custody caused national uproar over racism and police brutality

The US city of Minneapolis is set to pay $27 million to the family of George Floyd to settle a lawsuit over his death.

The case of Floyd, who died in police custody caused national uproar over racism and police brutality. Floyd was a 45-year-old Black man, who died in May at the hands of Derek Chauvin, a White Minneapolis officer. Floyd’s last moments were captured on tape by bystanders, which sparked one of the largest protest movements in the history of United States.

Chauvin kneeled on Floyd’s neck even when he kept saying “I can’t breathe”. Ultimately, Floyd passed away. The agreement will the largest pre-trial settlement of wrongful death in US history.

According to Benjamin Crump, an attorney for Floyd family, the settlement signifies how the death of a Black person, at the hands of the police “will no longer be written off as trivial, unimportant, or unworthy of consequences”.

A few days earlier, The US House of Representatives has passed a bill that bans controversial police tactics and eases the way for lawsuits against officers violating suspects' constitutional rights.

Democrats pushed the "George Floyd Justice in Policing Act" through the House by a vote of 220-212, with the support of only one Republican.

The bill would hold police "accountable" when constitutional rights are violated but would also support local law enforcement by fostering improvements in community policing, especially for minority neighbourhoods.
Also, one of its most controversial provisions would change "qualified immunity" for police, further opening the door for lawsuits over the use of excessive force.