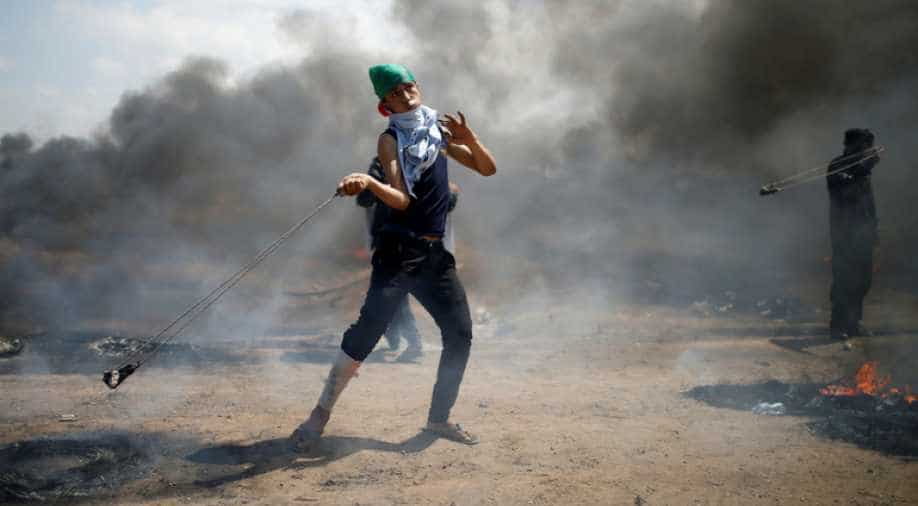 A Palestinian demonstrator uses a sling to hurl stones at Israeli troops during a protest against US embassy move to Jerusalem and ahead of the 70th anniversary of Nakba, at the Israel-Gaza border east of Gaza City May 14, 2018. Photograph:( Reuters )

As the United States embassy is all set to shift from Tel Aviv to Jerusalem on Monday, two Palestinian were killed by Israeli forces during the Gaza protests continuing for the sixth week.

Two men aged 21 and 29-years-old were killed raising the death toll to 47 Palestinian killed by Israeli forces since the protests began in March.

Along with demonstrations at Gaza border, protests are expected to further escalate in the day as the United States is set to open its new embassy in Jerusalem. A move announced by US president Donald Trump in 2017 to recognise Jerusalem as Israel's capital.

The protests at Gaza border began on March 30 as Palestinians marched towards Gaza border for what they called "The Great March of Return". These protests are continuing for the sixth week now.

Gathered in thousands of number, demonstrators are demanding access to their families' lost homes or lands which are now in Israel. Two-thirds of the two million Palestinians in Gaza are war refugees or their descendants.

Palestinians have accused Israeli forces of using tear gas and guns as they targeted protestors. However, Israel says its troops have used live ammunition to prevent a border fence from being damaged or breached.

According to media reports over 1000 Palestinians have been injured in the unrest so far.