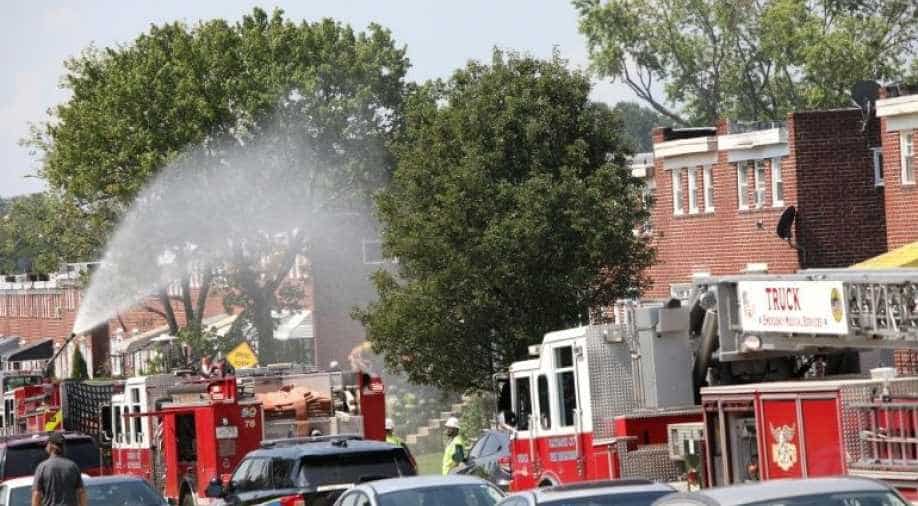 Fire trucks are seen at the scene of an explosion in a residential area of Baltimore, Maryland, U.S. August 10, 2020 Photograph:( Reuters )

A gas explosion ripped through a Baltimore neighborhood on Monday, killing at least one person, injuring six and trapping children as the blast destroyed at least three homes, firefighters said.

Fire officials described it as a natural gas explosion but said the exact cause was under investigation.

The blast destroyed three brick row houses and ripped open the wall of another, spreading debris throughout the neighborhood. Rescuers picked through the rubble, searching for victims with their hands and tools, Baltimore City Fire Department spokeswoman Blair Adams told reporters at the scene.

One woman was killed and six people were hospitalized in serious condition, fire officials said.

"The scene remains extremely active," the Baltimore Fire Department wrote on Twitter after a late-afternoon news briefing. "We are working to continue removing & clearing debris to determine if there are more victims. The cause remains under investigation."

Some of victims who were trapped earlier in the day were children, the Baltimore Firefighters IAFF Local 734 said on Twitter.

Neighbors responding to the blast dug through rubble and called out for victims. One neighbor told the Baltimore Sun he could hear shouts from trapped children.

"Come get us! We're stuck!" came the cries, Kevin Matthews told the Sun.

Matthews found one person buried from the neck down and another sheltering in a closet, the Sun said.

"You knew it was something catastrophic," Dean Jones told WBFF television about hearing the blast. "I didn't think. I didn't grab shoes. I took off running. I followed the smoke. I started yelling to come help."

Jones and several other neighbors freed at least one woman from the scene.

"Once they said a kid was in there, I lost it. I said I had to get in there now," Jones told WBAL television. "I am not a hero, I'm a human."