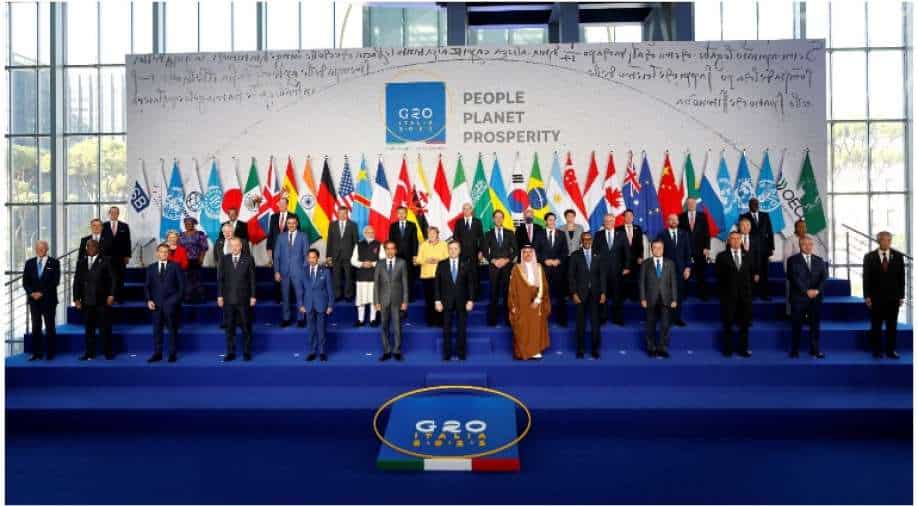 World leaders gather for the official family photograph on day one of the G20 leaders summit at the convention center of La Nuvola, in Rome Photograph:( Reuters )

The communiqué also sent an important symbolic message as United Nations-led climate talks get underway this week in Glasgow, Scotland

Having powered the industrial era, coal made many of the Group of 20 countries what they are today: the world’s 20 largest economies.

On Sunday, leaders from the G-20, who today represent the world’s biggest coal producers and consumers, agreed to take the first steps to weaken coal’s future, although they fell far short of what is necessary to sufficiently address climate change. In a joint communiqué released at the end of their summit in Rome, the G-20 leaders said they would end the financing of coal power plants overseas, but the statement included no new commitments on curbing the use of coal domestically.

The communiqué also sent an important symbolic message as United Nations-led climate talks get underway this week in Glasgow, Scotland. The leaders pledged to “pursue efforts” to limit the global average temperature rise to within 1.5 degrees Celsius by the end of the century, compared with preindustrial times.

But the world is currently not on track to achieve that goal, which scientists say is necessary to avert the worst effects of climate change. This stark fact hangs over the Glasgow climate summit, raising fears that the summit will yield similar half-steps.

Beyond vague if well-meaning targets, what matters are concrete measures that countries are taking to rein in the emissions of planet-warming gases more quickly.

“We remain committed to the Paris Agreement goal to hold the global average temperature increase well below 2 degrees C and to pursue efforts to limit it to 1.5 degrees C above preindustrial levels,” the final statement read, referring to the agreement among world nations to work together to cut emissions to limit global warming.

To actually achieve the 1.5-degree target, countries in the group would have to strengthen their national climate targets. The existing country commitments put the world on a path to far higher levels of warming, with the global average temperature rising by 2.7 degrees Celsius by 2100, which could lead to far more harrowing heat waves, fires and flooding.

Nor did the G-20 agree to specific financial arrangements to encourage emerging economies to make the energy transition away from fossil fuels.

Climate advocates said it is imperative to deliver tangible new commitments in Glasgow.

“The G-20 leaders’ call to limit global warming to 1.5 degrees Celsius is very significant,” said Ulka Kelkar, climate director for the India office of the World Resources Institute. The Glasgow conference “now needs to back it up with measures to cut emissions rapidly in this decade and urgently scale up climate finance.”

Jennifer Morgan, executive director of Greenpeace International, was more blunt. “If the G-20 was a dress rehearsal,” she said, for the U.N. summit in Glasgow, “then world leaders fluffed their lines.”

“Their communiqué was weak, lacking both ambition and vision, and simply failed to meet the moment,” Morgan said.

In their statement, the G-20 leaders said: “Keeping 1.5 within reach will require meaningful and effective actions and commitment by all countries, taking into account different approaches, through the development of clear national pathways.”

The communiqué also added an important caveat for big, emerging economies like India that have pressed for money and technology to make the transition away from coal: It said that reaching this goal will require “different approaches,” as well as “international cooperation and support, including finance and technology.”

The communiqué was lacking in specific financial commitments, which are necessary to persuade developing countries to make the energy transition, especially the phasing out of coal.

But in a first for the G-20, members agreed to take steps to reduce emissions of methane, a potent greenhouse gas. “We acknowledge that methane emissions represent a significant contribution to climate change and recognize, according to national circumstances, that its reduction can be one of the quickest, most feasible and most cost-effective ways to limit climate change and its impacts,” they wrote.

Coal remains the single largest source of electricity globally, yet its combustion is the largest source of carbon dioxide emissions. Those emissions trap heat in the atmosphere and have already warmed the planet by more than 1 degree Celsius, wreaking havoc on weather patterns around the world.

The host of the summit, Prime Minister Mario Draghi of Italy, pressed G-20 leaders to speed up the exit from coal. “We need to set long-term goals that are consistent with the objectives of the Paris Agreement and make short-term changes to achieve them,” he told reporters in Rome. “We must accelerate the phasing out of coal and invest more in renewable energy.”

Moving the world’s biggest economies away from coal by 2030 is vital to reaching the 1.5-degree target, analysts have said. But there are powerful countries that rely on coal.

China consumes more coal than any other country and has stepped up coal power production in recent weeks, in the wake of electricity shortages. India, too, relies on coal to produce most of its electricity and plans to consume more of it to meet its energy needs. Australia is a large coal exporter and keen to hold onto the revenues it creates.

The United States, Britain and the countries of the European Union have begun to pivot sharply away from coal, relying instead on natural gas. Although gas burns more cleanly than coal, it is also a fossil fuel that produces carbon dioxide.

António Guterres, secretary-general of the United Nations, has pushed countries to stop building new coal plants and to end subsidies on fossil fuels. Agreement on these issues has proved elusive.

The G-20 statement did pledge to end the practice of financing coal power plants in foreign countries, which in recent years had been a way for countries, including Japan, South Korea and China, to sell coal power infrastructure to developing nations. Turkey held out on the language regarding coal financing until the last minute, according to a G-20 official familiar with the matter, but ultimately agreed.

“The necessity of the coal phase out challenge has now been elevated all the way to G20 Leaders, but it is evident that some are still resisting agreeing to explicit language on coal,” Chris Littlecott, who follows coal for E3G, a London-based research group, said on Twitter.

He noted that the G-20 was following global trends, not leading them. The number of proposed coal plants has fallen sharply. That is because coal is no longer the cheapest source of energy, as it once was, and civil society groups in Asian countries including Vietnam, Bangladesh and Pakistan have vigorously pushed back against coal projects in the pipeline.

President Joe Biden has urged his fellow world leaders at the summit to act aggressively on climate, and his administration pushed for the agreement to end coal financing. But at home, Biden has struggled to hasten the shift away from coal and other fossil fuels.

He has thus far fallen short in his promise to end fossil fuel subsidies in the U.S. tax code. His attempt to raise billions of dollars by ending those subsidies was removed from a framework deal to fund investments in low-emission energy production, child care and a range of social policies, which Democrats were hoping to pass in the House and Senate as early as this week. A handful of Democrats, including coal-state Sen. Joe Manchin of West Virginia, have resisted Biden’s push to limit the subsidies.