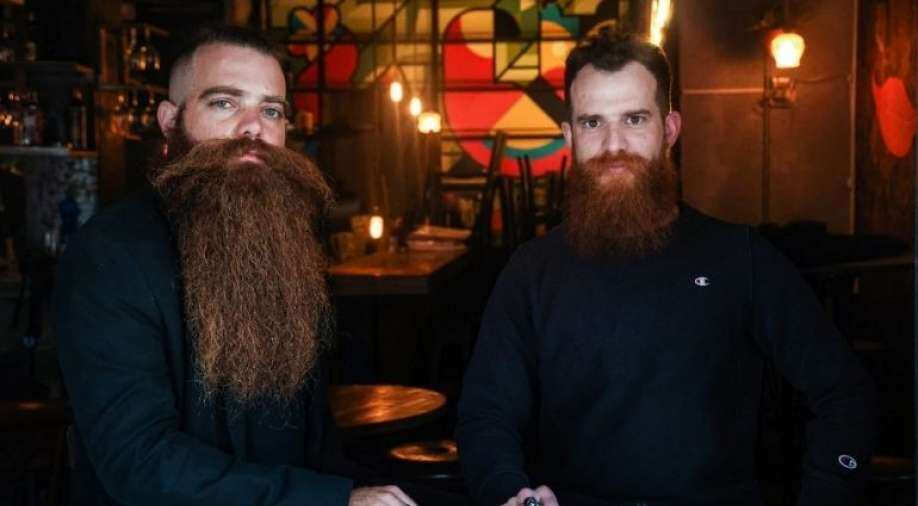 Bar Pinto (R) and Gilad Levi, two red-bearded 29-year-olds and founders of "Beard for All" ("Ptor Zakan" in Hebrew), a campaign challenging Israeli military rules compelling all male troops to be clean shaven, pose for a photo in Tel Aviv Photograph:( AFP )

Many orthodox Jewish men often go unshaven, a religious observance that the armed forces accommodate but Israel's secular youth is calling it 'discriminatory' and 'counterproductive'

Israel's army is facing a challenge on the home front unrelated to traditional threats against the Jewish state.

The battle comes in the form of facial hair as it has stirred a nationwide debate over the right to grow a beard, and activists say the army's ''future is at stake.''

As per the rules of Israel's military, all-male troops require to be clean-shaven and exceptions are made on the basis of religion.

Many orthodox Jewish men often go unshaven, a religious observance that the armed forces accommodate but Israel's secular youth is calling it ''discriminatory'' and ''counterproductive.''

Military duty at age 18 is mandatory in Israel, with young men compelled to serve for nearly three years and women for two. But increasing numbers are seeking exemptions, citing psychological conditions and other factors as grounds to avoid service.

Defence Minister Benny Gantz recently said that more than half of young Israelis were not serving in the military.

Pinto and Levi have taken issue with a system that grants exemptions to that rule on religious grounds, while the faces of secular troops must remain smooth.

Beard Exemptions for All is bolstered by a nearly 4,000-member Facebook group, an online video campaign and merchandise, including t-shirts and stickers featuring the army's logo, branded with a beard.

Israeli army rules state that "all soldiers are required to shave their faces".

But Pinto and Levi charge that there is discrimination in how that rule is enforced.

Exemptions may be granted to men who adhere to Jewish religious rulings against shaving.

Others who claim that their beard forms an essential part of their identity are also entitled to an exemption, but Pinto said he had heard stories from "thousands" of secular soldiers whose request for an exemption had been denied.

A group of 17 soldiers who agree with that assertion filed a supreme court petition in January seeking to force the army to grant exemptions to anyone who makes a request.

Facial hair, they argued, is crucial to many young Israeli men, regardless of their level of devoutness.

"Religious and secular are brothers in arms, we live together in this country," Pinto said. "Beards should not be an issue that divides us."