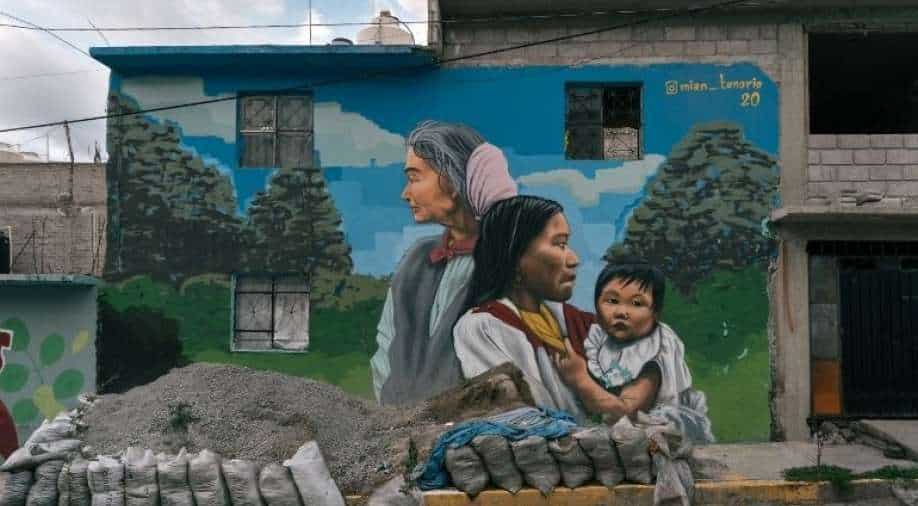 A mural by artist Miguel Tenorio on a house in Mexico City’s sprawling borough of Iztapalapa, Sept. 10, 2021. The murals are part of the Izatapalapa mayor’s art initiative, which she says was prompted by gender-based violence, and is part of a broader plan to make the the impoverished, high crime area safer. (Luis Antonio Rojas/The New York Times) Photograph:( The New York Times )

The rooftop paintings are the latest step in a beautification project from Iztapalapa’s government, which has hired some 140 artists over the past three years to blanket the neighborhood with almost 7,000 pieces of public art, creating explosions of color in one of the most crime-ridden areas of Mexico City.

Observed from a soaring cable car, the city is a sea of concrete stretching to the horizon, ruptured only by clusters of skyscrapers and the remains of ancient volcanoes. Some 60 feet below is the borough of Iztapalapa, a warren of winding streets and alleyways, its cinder block houses encasing the neighborhood’s hills in insipid gray.

But then, on a rooftop, a sudden burst of color: a giant monarch butterfly perched atop a purple flower. Farther along the route of Mexico City’s newest cableway, a toucan and a scarlet macaw stare up at passengers. Later, on a canary yellow wall, there is a young girl in a red dress, her eyes closed in an expression of absolute bliss.

The 6.5-mile line, inaugurated in August, is the longest public cableway in the world, according to the city government. As well as halving the commute time for many workers in the capital’s most populous borough, the cable car has an added attraction: exuberant murals painted by an army of local artists, many of which can be viewed only from above.

“There are paintings and murals all along the route,” said César Enrique Sánchez del Valle, a music teacher, who was taking the cable car home on a recent Tuesday afternoon. “It’s nice, something unexpected.”

The rooftop paintings are the latest step in a beautification project from Iztapalapa’s government, which has hired some 140 artists over the past three years to blanket the neighborhood with almost 7,000 pieces of public art, creating explosions of color in one of the most crime-ridden areas of Mexico City.

“People want to rescue their history, the history of the neighborhood,” said the borough’s mayor, Clara Brugada Molina. “Iztapalapa becomes a giant gallery.”

Sprawling toward the outer edge of Mexico City, Iztapalapa is home to 1.8 million residents, some of whom are among the poorest in the city. Many work in wealthier neighborhoods, and before the cable car, this often meant hourslong commutes.

As with many poor urban areas of Mexico, Iztapalapa has long been afflicted by both a lack of basic services, like running water, as well as high levels of violence, often linked to organized crime.

The mayor’s art initiative is part of a broader plan to make Iztapalapa safer, including with street lamps that now bathe in light the main roads that were once shrouded in darkness.

The murals feature national icons like Aztec deities, revolutionary leader Emiliano Zapata and artist Frida Kahlo, with a dash of turquoise across her eyes.

But there are nods to more local heroes, too.

Against a scarlet backdrop with blue, yellow, teal and lime-green shapes floating behind her, the image of a short-haired woman smiles at the viewer: It’s Lupita Bautista, an Iztapalapa native and a world champion boxer who is almost as colorful in real life.

On a recent morning, Bautista, 33, stepped into her gym wearing fluorescent green sneakers, a pink beanie and a rainbow tie-dye sweatshirt with her name scrawled in fuchsia glitter across the front.

“I love that the colors are so strong,” she said of the government-funded project that, in addition to creating the murals, has transformed the neighborhood where she trains into a mosaic of color by coating the cinder block houses in bright hues, a paint job that would be unaffordable to many residents. “It gives it a lot of life.”

Bautista’s childhood story is a familiar one in the borough. When she was young, her house in Iztapalapa had no electricity — lit only by the glow of candles at night. Her neighborhood did not have sidewalks or even paved roads.

“Everything was gray,” she recalled.

Crime was an issue, too, with robberies and murders so common that Bautista said her mother only let her or her sister leave the house to go to school.

“I was terrified,” she said. “I felt like something was going to happen to me.”

With many avenues now brightly lit, she said she felt much safer jogging after dark.

“I was built running through the streets,” she said of her youth spent weaving through the neighborhood’s avenues and alleyways long before she became a champion fighter. “Now you can run with a lot more security and focus — not thinking about when someone’s going to jump out and scare you.”

But despite the government’s efforts, most people in Iztapalapa continue to live in fear: According to a June survey from Mexico’s national statistics agency, nearly 8 in 10 residents said they felt unsafe — among the highest rate for any city in the country.

Women in particular face pervasive violence in Iztapalapa, which ranks among the top 25 municipalities in the country for femicide, in which a woman is killed because of her gender. From 2012-17, city security cameras recorded more instances of sexual assault against women in Iztapalapa than in any other Mexico City borough, according to a 2019 report from the National Autonomous University of Mexico.

That gender-based violence is what prompted the mural and lighting project in the first place, according to the mayor: to create pathways where women could feel safe walking home. Many of the murals celebrate women, either residents like Bautista or famous figures from history as well as feminist symbols.

“We’re trying to reclaim the streets for women,” said Brugada, the mayor.

But not everyone is convinced the strategy is working.

Daniela Cerón, 46, was born in Iztapalapa when it was just a rugged community with open fields where farmers grew crops.

“It was like the little town,” Cerón recalled. “You used to see the beautiful hills.”

In the 1970s, the area started to rapidly urbanize.

The surge in population, both from families leaving inner Mexico City and from migrants coming from rural areas, also brought an increase in crime. For Cerón, who is transgender, that meant confronting not just widespread violence but also the prejudice of living in a conservative religious neighborhood — every year, Iztapalapa attracts millions of congregants to a giant reenactment of the crucifixion of Christ.

“That religious stigma weighs against you,” Cerón said.

As for the murals, she said they look beautiful but have done little to make her feel safer. “It does nothing for me to have a very pretty painted street if three blocks away they’re robbing or murdering people,” she said.

Alejandra Atrisco Amilpas, an artist who has painted some 300 murals in Iztapalapa, believes they can make residents prouder of where they live, but she admits they can only go so far.

“Paint helps a lot, but sadly it can’t change the reality of social problems,” she said.“A mural isn’t going to change whether you care about the woman being beat up on the corner.”

Atrisco, who is gay, said she had come up against conservative attitudes during the project, whether from male artists doubting her abilities or local officials barring her from painting LGBTQ-themed murals.

“Violence against women, yes, but lesbians, no,” she said, smiling ruefully.

Still, Atrisco believes her work can affect residents’ lives by representing the characters of Iztapalapa in full color.

“Every day you confront a new challenge, every day a new wall and a new story,” she said. “You make dreams come true a little bit — you become a dream maker.”