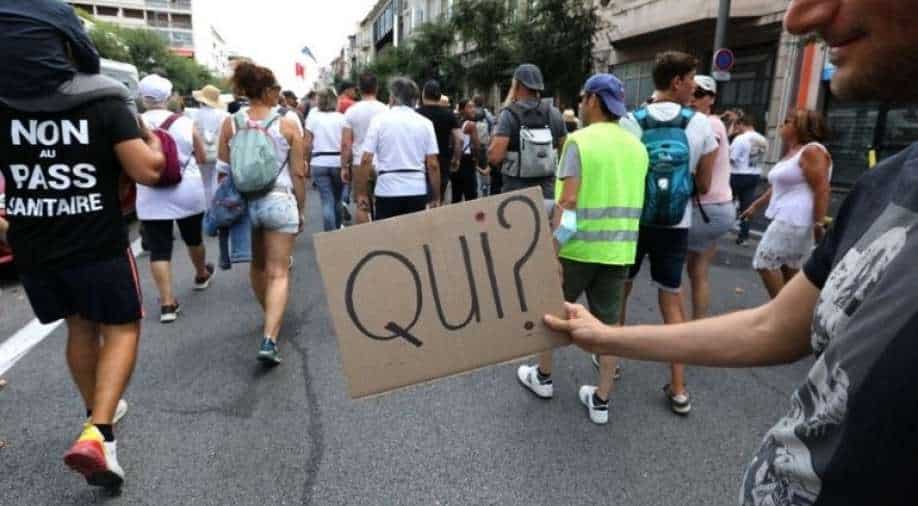 A protester holds a banner reading "Who?" during a national day of protest against the compulsory Covid-19 vaccination for certain workers and the mandatory use of the health pass called for by the French government in Perpignan, southern France, on August 21, 2021. Protesters took to the streets across France on August 21 to rally against the health pass needed to enter a restaurant or travel on an inter-city train. A valid health pass is generated by two jabs from a recognised vaccine, a negative coronavirus test or a recent recovery from infection. Photograph:( AFP )

Locals believe the 'health pass' and the 'vaccine passport' will bring a divide in the society and it can lead to the society being looked at in two different parts: the vaccinated and non-vaccinated

Thousands of people have once again taken to streets in France to protest the government’s policies regarding coronavirus vaccines.

This Saturday marked the sixth weekend of protest in France against the Macron government’s "health pass" amidst the ongoing coronavirus pandemic.

Locals believe the "health pass" and the "vaccine passport" will bring a divide in the society and it can lead to the society being looked at in two different parts: the vaccinated and non-vaccinated.

The demonstrators were seen yelling slogans and carrying placards with messages that pointed out that these practices by the Macron’s government are ‘unfair’ and restrict the rights of the unvaccinated citizens of the country.

Nearly 200,000 people have taken part in these weekend protests, as per the interior ministry. However, the organisers have claimed that the number of demonstrators have been double the number reported by the government.

People were seen holding banners that read 'Liberty' and 'Macron! We don't want your pass!', in addition to many other anti-government slogans.

This protest has also brought together the anti-vaxxers community, conspiracy theorists and some former members of the ‘Yellow vest’ movement.

Meanwhile, Macron’s opposition has also accused the French leader of turning his leadership to a dictatorship by imposing these health pass.

Macron's officials have urged locals to get vaccinated in order to be able to access and enjoy public spaces and services.