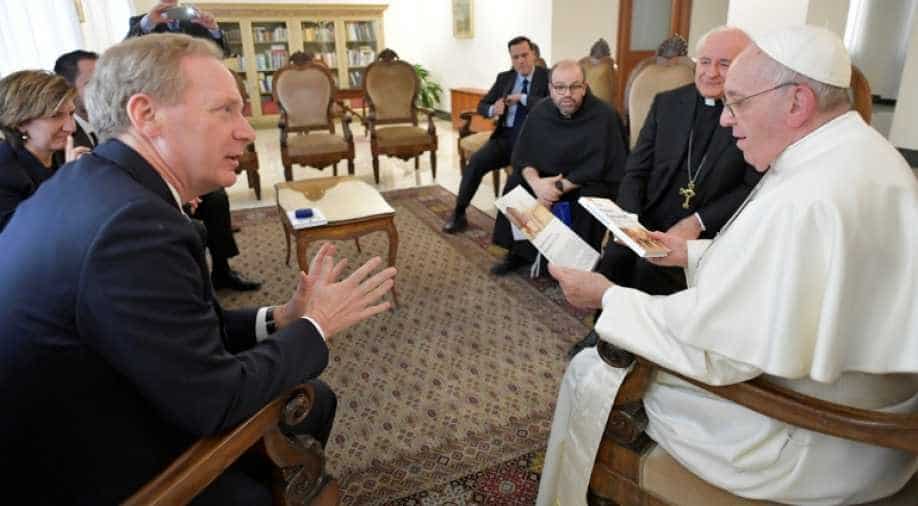 The Vatican said Francis and Smith discussed 'artificial intelligence at the service of the common good and activities aimed at bridging the digital divide that still persists at the global level'.

Pope Francis debated the potential threats artificial intelligence poses to humanity with the head of Microsoft on Wednesday, ahead of a robotics summit at the Vatican, it said.

"In the wrong hands, every instrument can become a weapon if the organisational power of humanity cannot keep up with the technology itself," Microsoft head Brad Smith said in an interview ahead of the papal meeting.

With Francis he discussed "artificial intelligence at the service of the common good and activities aimed at bridging the digital divide that still persists at the global level," the Vatican said.

The pontiff had urged world leaders gathered in Davos last year to ensure that AI "contribute(s) to the service of humanity and to the protection of our common home, rather than to the contrary".

Smith told the Vatican's L'Osservatore Romano newspaper that "in order to ensure people have confidence in technology, we must think beyond the technology itself".

"We need strong ethical principles, new evolved laws, the training of people with new skills and even labour market reforms".

Microsoft and the Vatican's Pontifical Academy for Life launched an international prize on ethics in artificial intelligence (AI), the academy said.

It will go to the best doctoral dissertation between September 2018 and October 2019 on AI at the service of humanity.

"AI will have an impact on every area of society and will not be created by or used by the technology sector alone. That's why the world must come together to face these problems with a sense of shared responsibility," Smith said.

His visit came ahead of a summit on "Robo-ethics: Humans, Machines and Health" at the Vatican on February 25 and 26.

The workshop will focus on the use of robots and artificial intelligence, specifically in medicine and health care, and how they are having an ever-increasing impact on human lives, relationships, communities and creation.

It will be followed in 2020 by a plenary assembly on artificial intelligence.