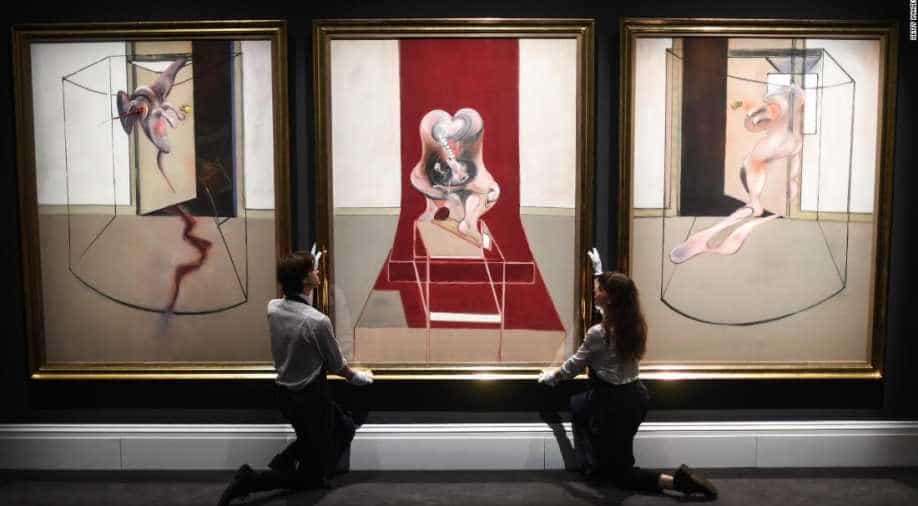 The painting exceeded pre-sale estimates of between $60 million and $80 million.

Francis Bacon's triptych painting has been sold for $84 million during a virtual auction at the Sotheby's. For the first time, the Sotheby's had to hold an auction via live stream and without an audience due to coronavirus pandemic.

Bacon painted this triptych between 1962 and 1991 and it is said to be inspired by the 'Oresteia of Aeschylus'. The art-work received telephone bids from  New York and Hong Kong.

The painting exceeded pre-sale estimates of between $60 million and $80 million.

Sotheby's spring auction normally generates billions of dollars but due to coronavirus pandemic hitting hard in New York, the company decided to conduct the event via stream a series of modern and contemporary art sales from London.

#AuctionUpdate: Francis Bacon’s large-format masterpiece ‘Triptych Inspired by the Oresteia of Aeschylus’ soars to $84.6 million - surpassing its pre-sale high estimate of $80 million after an 11-minute bidding battle between our specialist Grégoire Billault and an online bidder pic.twitter.com/TZLqOnOjKz

Sotheby's Europe chairman, Oliver Barker dubbed the event as "as historic evening" and first of its kind to be held without an audience.

A bidding war raged for Bacon's artwork. It went on for around 10 minutes between one potential buyer placing bids online from China, and another - who was victorious but chose to remain anonymous - making counter-offers on the phone to a Sotheby's specialist in New York.

Online bids for other paintings rarely exceeded $5 million, Jean-Michel Basquiat's drawing of a head, "Untitled (Head)" sold for $15.2 million on Monday - a new Sotheby's record for an online purchase - and a painting by Joan Mitchell, "Garden Party," went for $7.9 million.

Sotheby's event brought in a total of $363.2 million, the auction house said.