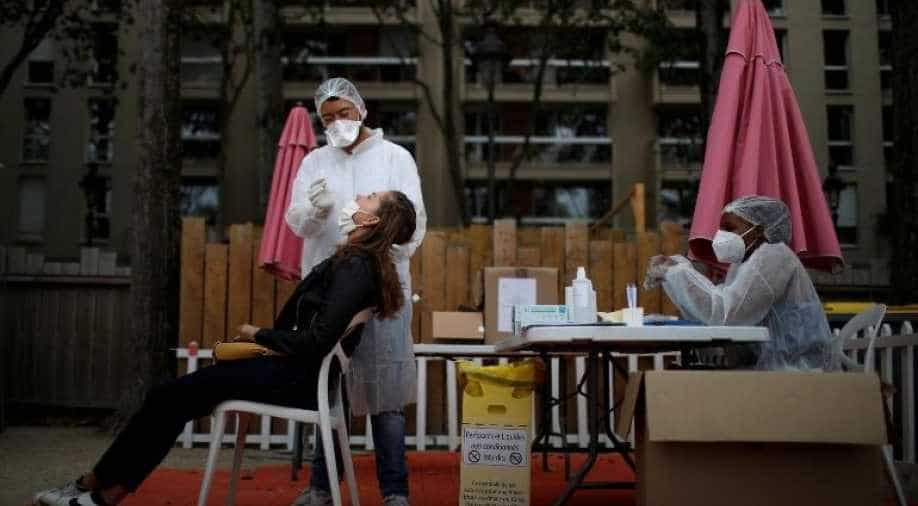 FILE PHOTO: A health worker, wearing a protective suit and a face mask, administers a nasal swab to a patient at a testing site for the coronavirus disease installed at the Bassin de la Villette in Paris, France Photograph:( Reuters )

The surge has raised the possibility that the government could be forced to shut the country down again.

France reported 7,379 new confirmed coronavirus cases on Friday, the most since lockdown, in what the health ministry described as an exponential surge just days before millions of children are due to return to school for the first time since March.

The daily tally was just shy of the record 7,578 high set on March 31, at the peak of an initial wave of COVID-19 infections that paralysed Europe. The surge has raised the possibility that the government could be forced to shut the country down again.

"We're doing everything to avoid another lockdown, and in particular a nationwide lockdown," President Emmanuel Macron told journalists earlier on Friday. He added it would be dangerous to rule out any scenario.

In a weekly review of the pandemic, the health ministry said the country was seeing an "exponential progression of virus transmission".

Like other hard-hit western European countries, France imposed a sudden and strict lockdown in March, during which most residents were confined to their homes. The restrictions were gradually lifted from May 11 after infections sharply dropped.

The authorities are now searching for ways to limit the spread of the disease without a new lockdown. On Friday, Parisians were ordered to wear masks at all times outdoors in the capital.

The reopening of schools on Tuesday next week has been widely anticipated as a major step back towards normality. More than 12 million children will return to school, most for the first time in more than five months.

So far, the rapid increase in case numbers has yet to lead to a similar surge in hospitalisations or deaths. The ministry reported 20 new COVID-19 deaths on Friday, raising the cumulative total to 30,596. The number of people in hospital with the disease was unchanged at 4,535 and the number in intensive care rose by six to 387.

Authorities say the virus is now spreading among younger people who are less likely to show severe symptoms.

Two weeks after France's lockdown ended on May 11, the number of daily new infections fell to a low of 115 and a seven-day average low of 272. But as the country gradually reopened restaurants, museums and shopping malls, the number of new confirmed cases rose to about 500 per day by the end of June.

How people's genes might make them more susceptible to Omicron?