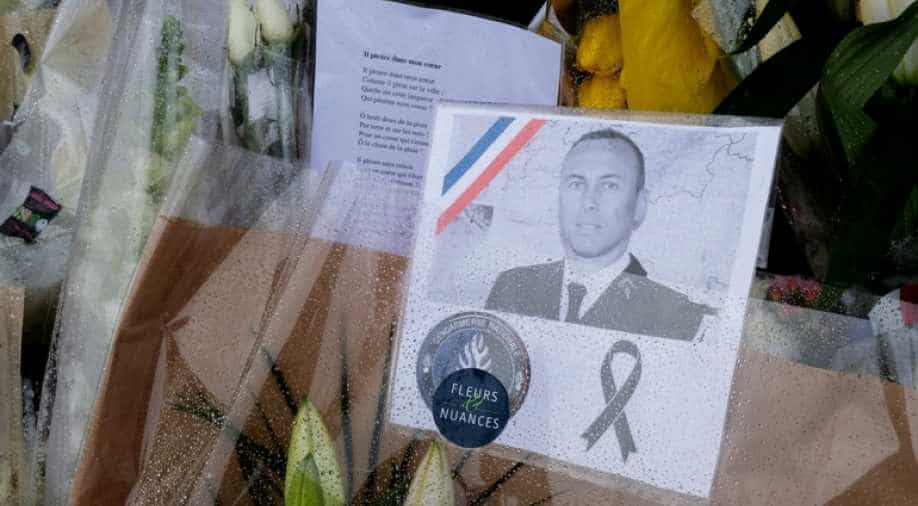 An image Lieutenant-Colonel Arnaud Beltrame is attached to a bouquet of flower laid outside the gates of the gendarmerie of Carcassonne where he worked in southwest France. Photograph:( AFP )

Hundreds of mourners packed a church in a rural French town rocked by a deadly Islamist attack for a Sunday service in tribute to the victims, who included a policeman hailed as a hero for offering himself in place of a hostage.

Lieutenant-Colonel Arnaud Beltrame, 44, was shot and stabbed after taking the place of a woman whom Radouane Lakdim had been using as a human shield during his attack Friday at a supermarket in the town of Trebes.

The sleepy town of 6,000, located on the picturesque Canal du Midi, is just eight kilometres (five miles) from the famed medieval walled city of Carcassonne, where a silent march is planned next Saturday, the eve of Easter Day.

The bishop of Carcassonne and Narbonne celebrated the mass in Trebes' Saint-Etienne Church to honour the four killed and three wounded in the attack claimed by the Islamic State group.

Representatives from the Muslim community attended the mass.

"Your presence tells us that the creators of hatred will not win," Bishop Alain Planet told them in his homily.

"Now is the time only for prayer and compassion," he said. "May such events help us find the strength to build a society in which they will no longer be possible."

Leaving the 14th-century church, Carcassonne imam Mohamed Belmihoub told reporters: "The (Muslim) community has been stabbed, Islam itself has been stabbed... by people who use symbols that are dear to our hearts."

All of France is unhappy'

After the mass, which had an overflow crowd listening through loudspeakers outside, pensioner Emile Acco said: "I am very sad. All of France is unhappy. We want this to end."

A national tribute will be held at a later date for Beltrame, who President Emmanuel Macron said had "died a hero" and deserved "the respect and admiration of the whole nation".

Following the worst jihadist attack of his presidency, Macron has called a meeting later this week of the security services monitoring individuals suspected of radicalisation.

General Richard Lizurey, chief of staff of France's gendarmes, on Sunday addressed the region's force, of which Beltrame was the third in command.

"We... are proud to have counted Arnaud Beltrame in our ranks. His example must inspire us in our everyday duty," Lizurey told reporters afterward.

Lakdim, 25, a petty criminal, was on a watchlist, but authorities had concluded the Moroccan-born French national did not pose a threat.

Investigators found notes referring to IS at Lakdim's home in Carcassonne, a legal source said, including a hand-written letter in which he claimed allegiance to the jihadist group.

Lakdim, who was armed with a gun, knife and homemade explosive devices according to a security source, was shot dead as police moved in to end his siege of the Super U supermarket where he had holed up after a shooting spree in Carcassonne.

He had hijacked a car in Carcassonne and shot the two people inside, killing the passenger and leaving the Portuguese driver in a critical condition.

He also shot and wounded a police officer out jogging.

Lakdim had already shot dead the supermarket's butcher and a customer when Beltrame offered to take the place of a woman he had taken hostage.

Lakdim shot and stabbed the policeman before anti-terror officers killed him.

Beltrame died of his wounds early Saturday, becoming the fourth victim in the shooting spree.

World leaders paid homage to the slain officer, with British Prime Minister Theresa May tweeting that his "sacrifice and courage will never be forgotten", while US President Donald Trump denounced the "horrible attack".

Lakdim fit a familiar profile as a petty criminal who had turned to extremism.

A small-time drug-dealer, his rap sheet included convictions for carrying a banned weapon and for drug use. He spent a month in jail in 2016.

His girlfriend and a 17-year-old friend were in custody.

According to a source close to the investigation, Lakdim had hinted at travelling to Syria in 2014, but did not go.

France, part of the US-led coalition fighting IS, remains on high alert following a string of deadly attacks that have killed more than 240 people since 2015.

During the attacks, he demanded the release of certain prisoners -- notably, according to a security source, Salah Abdeslam, the prime suspect in the November 2015 Paris terror attacks.

IS claimed Friday's attack was in response to its call to target Western enemies, as is customary when the assailant has pledged allegiance to the jihadists.