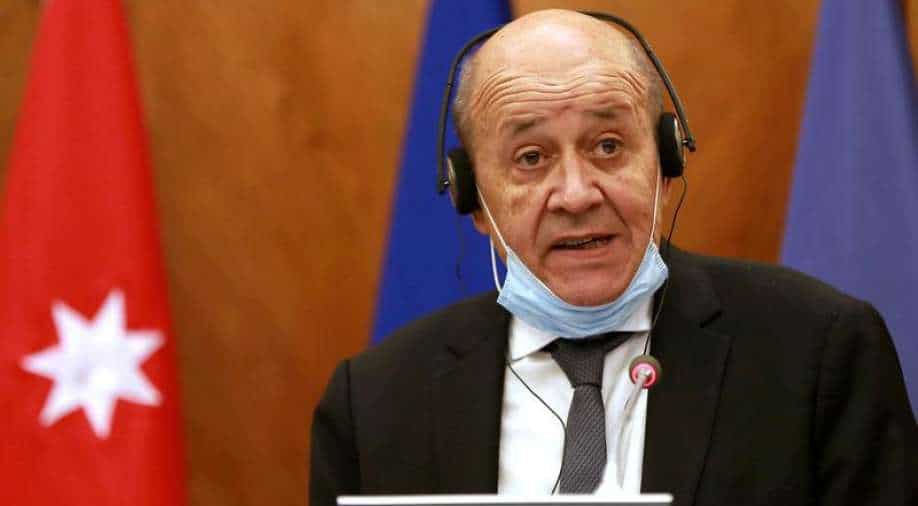 Speaking by video link at the UN Human Rights Council in Geneva, Le Drian said that witness accounts and documents from the Chinese region of Xinjiang pointed to 'unjustifiable practises towards Uighurs and a system of large-scale surveillance'

Activists and U.N. rights experts have said that at least 1 million Muslims are detained in camps in the remote western region. China denies abuses and says its camps provide vocational training and are needed to fight extremism.

Speaking by video link at the UN Human Rights Council in Geneva, Le Drian said that witness accounts and documents from the Chinese region of Xinjiang pointed to "unjustifiable practises towards Uighurs, and a system of large-scale surveillance and institutionalised repression."

He also listed the "attempted murder" of Russian opposition figure Alexei Navalny, who was poisoned with a nerve agent in an attack he blames on the Kremlin, as well the crackdown on pro-democracy demonstrators in Belarus, the ongoing wars in Syria and Yemen and the coup in Myanmar.

Le Drian also expressed "great concern" about the fate of Iranian human rights lawyer Nasrin Sotoudeh, who was jailed in 2018 after defending a woman arrested for protesting against the requirement for Iranian women to wear the hijab.

Foreign Minister Wang Yi told the U.N. Human Rights Council that it was taking counter-terrorism measures in accordance with the law and that Xinjiang enjoyed "social stability and sound development" after four years without any "terrorist case."

There were 24,000 mosques in Xinjiang, where people of all ethnic groups also enjoyed labour rights, he said.

The Biden administration last month endorsed a last-minute determination by the Trump administration that China has committed genocide in Xinjiang and has said the United States must be prepared to impose costs on China.

Earlier, British foreign secretary Dominic Raab denounced torture, forced labor and sterilizations that he said were taking place against Uighurs on an "industrial scale" in Xinjiang. "The situation in Xinjiang is beyond the pale," he said.